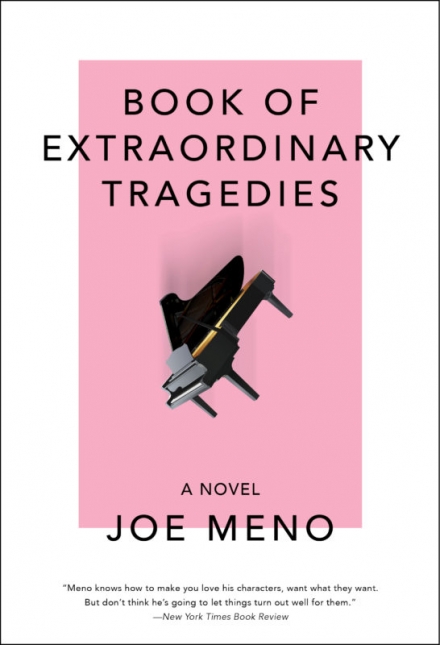 Joe Meno’s Book of Extraordinary Tragedies captures something of a modern-day naturalism. His characters, a family of Eastern Europeans living on Chicago’s South Side, are — like those of Frank Norris and Ernest Hemingway — molded by their social conditions, shaped by their heredity, and victims of seemingly inescapable poverty, drugs, and crime.

The novel opens with twentysomething narrator and onetime classical-music prodigy Aleks tending to his sick mother; parenting his teenage brother, Daniel, and his preschooler niece, Jazzy; and serving as a father figure to his sister (and fellow prodigy) Isobel, who struggles with addiction, motherhood, and illness. Aleks also keeps an eye on his aging grandpa and serves as the only contact with his and his siblings’ biological father.

These forces drive the story. Events happen that are — in keeping with the naturalism aesthetic — beyond Aleks’ control, tugging him in one direction or another. Even his voice lacks agency or self-reflection; he narrates as a small child might, with distance and matter-of-factness. In recounting his sister’s cancer diagnosis, for example, he says flatly, “One day Isobel asks me to go to a follow up appointment to get the results of another biopsy. I meet her at the clinic.”

An episode with Isobel’s boyfriend again illustrates Aleks’ narrative distance and inability to act. After stealing the ex-Marine’s artificial leg — a moment of the dark humor the author is so good at conjuring — Aleks says, “I see Billy climb unsteadily out of the passenger seat and when he comes at me, I know there is nothing I can do.”

Another time, when the family is being thrown out of their house, Aleks reports, “I come home and find a pink eviction notice stapled to the front door.” This sets in motion their journey to a makeshift treehouse camp in a nearby park and eventual relocation to a new (albeit crumbling and rodent-infested) apartment.

Music is a central motif throughout. For starters, the novel’s opening line, “Begin in F# minor with a symphony of ghost notes,” alludes to the complexity of the story to come; F# minor is a difficult key to compose in and, understandably, is seldom used. Folded into this theme is Aleks’ heritage: He hails from a once-renowned Austro-Hungarian family whose musical talent brought them acclaim and happiness. Upon their immigration to the U.S., however, those things were lost. Yet the gift persists in Isobel and Aleks. It is his one true solace, and he is forever referencing songs and wearing headphones, the latter making the outside world tolerable.

The book is divided into four movements, just like a symphony. Things happen quickly in movement one, where Aleks’ obstacles are laid before the reader. Meno follows this with a slower movement during which his characters sit idle and make little progress. In the third movement, the characters — especially Aleks and Isobel — become bodies in motion. The final movement rises to a satisfying crescendo.

Music as a motif plays a further role because our leading figure’s passion for it renders his hearing loss even more poignant. Here and elsewhere, Meno is keen to saddle his characters with traits that grate against their ambitions or hint at their internal struggles. Young Jazzy, who also suffers from hearing loss, enjoys playing dead until she’s given the role of a dead person in the school play. And teenager Daniel dresses as a ghost, a nod perhaps to what he sees as his own ethereal existence and a callback to the story’s opening “ghost notes.”

The novel itself can be seen as a symphony of artful complexity with careful timbre, melody, and countermelody all harmonizing together. It is not, however, poetic. If you’re looking for a work with stylistic flair, Book of Extraordinary Tragedies, with its clipped syntax and plain-spokenness, isn’t it. But if you’re seeking a dark commentary on the life of a third-generation immigrant family in 21st-century America — one that reveals its more subtle undertones only upon additional reads — the author gives you exactly that.

Shelby Smoak is a writer and musician. His memoir, Bleeder (Michigan State University Press), received praise from sources as diverse as the Minneapolis Star Tribune, Library Journal, and Glamour, and has won several awards, including “Best of the Best” by the American Library Association. He was also featured on local TV and radio, including NPR.  Shelby has been touring as a musician since the 1990s. He recently appeared on NPR with his band Bleeder. Awarded a Pen/American grant for writers living with HIV, Smoak holds a Ph.D. in literature and an M.A. in English. He works as an advocate and education specialist for BioMatrix Specialty Pharmacy. He lives, writes, and plays music in the Shenandoah Mountains of Virginia.