Blackboard: A Personal History of the Classroom

A baby boomer reflects on his life as a student. 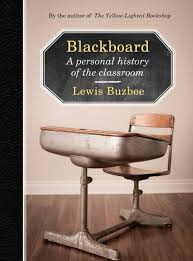 Those who have fond memories of an earlier age, when the American public school system was regarded as among the best in the world, could be forgiven for indulging in nostalgia. That, to some extent, is what Lewis Buzbee has done in his memoir-cum-critique, Blackboard.

Buzbee, a poet and fiction writer who grew up in San Jose in the 60s and 70s, takes us on a leisurely ramble through his school years, fondly recalling the many teachers along the way who exerted themselves for his benefit.

He’s a graceful writer, and he also seems to have near total recall of his kindergarten-through-12th-grade experience. I’m only a few years Buzbee’s senior, but my memories of kindergarten are limited to one traumatic experience that lasted perhaps five minutes (my teacher, possibly annoyed by my precocious literacy, had me stand in a corner when I was stumped by an obtuse question in our getting-ready-to-read workbook — or that, at least, is how I remember it). Buzbee, on the other hand, remembers his entire schedule, including the daily snack of “graham crackers washed down with slightly warm milk from miniature waxed cartons.”

But the narrative lacks tension until Buzbee reaches middle school and the premature death of his father temporarily sends him off the rails. He spends the first year or two of high school teetering on the brink of juvenile delinquency, a habitual shoplifter and pothead.

Buzbee was lucky enough to encounter some caring, and remarkably persevering, teachers. When his sophomore English teacher assigns him a book report on The Grapes of Wrath, suspecting it will grab him, the scales begin to fall from Buzbee’s eyes. He discovers, or rediscovers, a love of reading, and from there it’s a hop, skip, and a jump to aspiring to be a writer himself.

While Buzbee’s tale of redemption-via-education has its moving moments, it’s not enough to sustain a book-length narrative. The Grapes of Wrath epiphany comes on page 142 of a 200-page book. Before that, Buzbee has padded his story by, for example, describing his elementary school desk in minute detail.

It’s a lyrical description, for the most part, but do we really need to be told that the pen trough at the top “kept pens and pencils from rolling away”? We also learn that Buzbee, as a left-handed student, disliked the college chairs with desks attached that were made for the right-handed. I’m a lefty, too, and share his sentiments, but how important is any of that to understanding the American educational experience, or even just Buzbee’s?

Apparently sensing that the narrative needed more heft, Buzbee includes some factoids about the origins and history of certain educational practices or tools, like the blackboard and the desk. He also tries to extend his reach to the dismal present, relying largely on the experience of his daughter, a middle-schooler on the cusp of high school. Unfortunately, these forays away from his own story are too superficial and disconnected to add much of value.

Since Buzbee attended fairly standard public schools, and his daughter’s experience has been in private schools, there’s not much basis for comparison. And although he visited each of his former schools, it appears he didn’t spend enough time there to compare his past to their present. His disgust at the state of American education today rests largely on some brief tours of public schools his daughter could have attended, along with media reports and a bit of Googling.

That doesn’t stop Buzbee from ending with a tirade against budget cuts that have severely hampered public education in California, and a list of proposals to “save our schools” that basically hinge on reducing class size and increasing teacher salaries.

These aren’t bad ideas, but — leaving aside their political feasibility — it’s far from clear that they’re enough to solve the most intractable problems plaguing American schools today. Buzbee describes himself as an average student from a working-class family, with a father who only made it through 7th grade. He implies that if only schools today operated under the same beneficent conditions he experienced, many more lives could be saved by education.

But, as he himself acknowledges, he didn’t grow up in an isolated bubble of entrenched multi-generational poverty, as many urban students do today. More education money won’t necessarily equip them to compete with their more affluent peers; you have to know what to do with it. The United States spends more money per capita on education than many other nations, but still trails behind them on international tests.

For those who want a pleasant trip down one baby boomer’s educational memory lane, Buzbee makes a congenial if sometimes meandering guide. But Publishers Weekly’s assessment that Blackboard is a “subtle, sharply etched critique of contemporary education,” quoted on the book’s back cover, is way off base. Fortunately, for those who want that, there are many other places to look.

Natalie Wexler blogs about education at Greater Greater Washington. She is the author of three novels, including the recently published historical novel The Observer, based on the experience of the first woman to edit a magazine in the United States.

The Triumph of the Amateurs