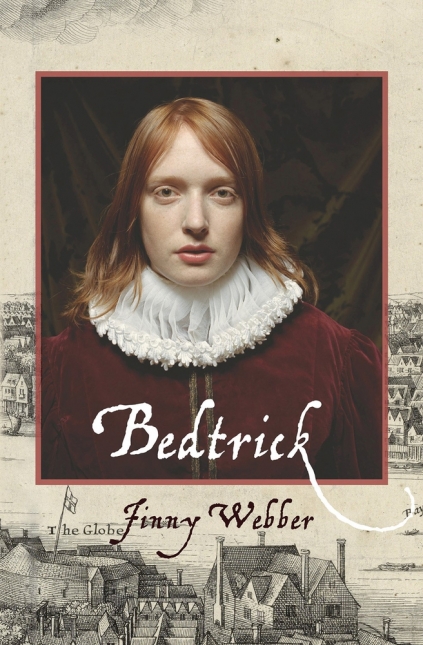 Bedtrick, the final installment in Jinny Webber’s Shakespeare’s Actor Trilogy, chronicles four years in the life of Alexander “Sander” Cooke, a 23-year-old performer with a Shakespearean troupe called Lord Chamberlain’s Men. Thanks to Sander’s slight figure and smooth face, he specializes in female roles. During the Elizabethan era, women were prohibited from performing onstage.

But Sander has a secret which gives him a major advantage: He is a she. Of the few people who know, his soft-spoken friend and director, Will Shakespeare, and the notorious Moll Cutpurse support his every endeavor.

When Frances Field, a successful dressmaker and sometime lover of Sander’s roguish brother, becomes pregnant by that brother, Sander marries her, thus rescuing her and the baby from disgrace. Sander’s sympathy soon develops into passion, but does Frances feel the same way? Can an unusual marriage of convenience endure hardship and thrive during such a straightlaced era? More urgently, if Sander’s female identity is revealed, both women might pay a frightening price — job loss, accusations of witchcraft, flogging, or even imprisonment.

As this love story unfolds, Shakespeare assigns Sander — who narrates the novel in the first person — some of the greatest roles in theater history. In a clever parallel with Sander’s circumstances, the characters Portia, Rosalind, and Viola brave a man’s world by disguising themselves in male garb. Offstage, over tankards of ale in snug London taverns, Sander and his fellow players philosophize about the meaning of their roles.

The novel spans March 1599 to August 1603 and makes good use of the intrigue surrounding the final years of Queen Elizabeth I’s reign, the Earl of Essex’s rebellion, and James I’s ascension to the throne. For example, soon after Sander’s troupe performs Richard II for the earl and his coterie, those men attempt to overthrow the government. Given that the play centers on the toppling of a monarch, officials accuse the actors of sedition. Despite the queen’s magnanimous support of the arts, her privy council must decide whether to punish the performers.

A list of over four dozen mostly real-life characters at the front of Bedtrick attests to the book’s historical accuracy. These personages, from poet John Donne to Morocco’s ambassador to Elizabeth’s court Abd el-Ouahed ben Messaoud, bob in and out of the narrative, adding to the portrait of London’s vibrant, high-caliber arts community.

Author Webber is a college instructor with a special interest in gender identity in Elizabethan theater, and her novel seems to have a dual intent: to offer the perspective of a unique individual and to delve into the nuances of Shakespeare’s work as a whole. Sander summarizes each play as he performs it, and his conversations about its deeper meanings fill long passages. Such extensive analysis will appeal to devotees of the Bard, but lesser aficionados may find it tedious.

Most impressive throughout the book is Webber’s sensitivity to sexual and multicultural identities. Sander dares to don a man’s doublet, codpiece, and hose but leaves the overt boundary-pushing to Cutpurse, his cross-dressing idol. The latter flaunts her girl-boy identity in the face of social norms and, like a brassy fairy godmother, uses her connections to various subcultures to solve many of Sander’s quandaries.

As do other passages, Shakespeare’s recommendation that Sander woo Frances with “kisses and tender embraces” implies an unexpected tolerance of homosexuality. Although Bedtrick does not offer as deep an examination of lesbianism as found in such historical novels as Tipping the Velvet, its depiction of same-sex love is relevant to today’s discussion of gender fluidity.

The book touches on race, as well, such as when characters acknowledge the blatant antisemitism in The Merchant of Venice and interact with a Moorish delegation, whose noble bearing possibly inspired Othello. Observes Sander: “Perhaps, I thought, Shakespeare could write a play showing a Moor in a more flattering light.”

Was such open-mindedness really possible in 17th-century England? Maybe not. But the protagonist’s likability — and Bedtrick’s immersive richness — makes us want to believe it anyway.

A decade-long resident of Florida, Gisèle Lewis writes about memories, living abroad, and volunteering with the local refugee community. Her work has been published in the Baltimore review, Saw Palm, Pirene’s Fountain, and elsewhere. Her interviews with women readers appear at GiseleLewis.com.