A comic book drawn in words, this is one raunchy novel. 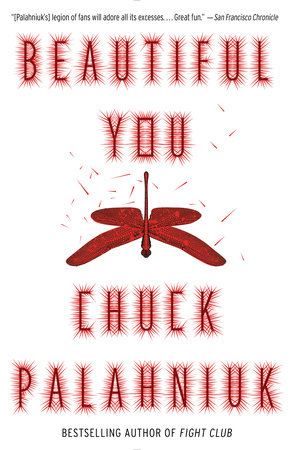 If you just love Chuck Palahniuk, the author of such cult books as Fight Club and Choke, then this review is not for you.

The story begins with protagonist Penny Harrigan undergoing a sexual assault that has her stripped naked and flailing in front of a courtroom full of men. The joke, whose punchline isn't revealed for another grinding 200-some pages, is that she is raping herself. Ha-ha.

After this amusing opening gambit, we flash back to Penny's humble beginnings. Despite failing the bar exam twice, the 25-year-old Nebraskan has managed to procure a position as a lackey at "the most high-powered firm in the country."

One might wonder how this would happen, but it is best not to cling to real-life logic, for this is Chuck's world, where details are repeated mercilessly and then discarded, disposable props in the pursuit of a ripping yarn; where the National Enquirer has a business and science section; where all females have identical sexual impulses and histories (heterosexuals who have never achieved orgasms); where everyone in Manhattan is white unless they are one-dimensional ethnic roommates, such as the nonsensically named Kwan Qxi, who moves "soundlessly about the crowded apartment, dusting the baseboards…trimming her bonsai…folding the trailing end of the toilet paper roll into origami surprises," or the mononymous Esperanza, "a fiery high-breasted Latina" who constantly shouts "Ay, caramba!"; and where all women share the same cervix size and so they can borrow each other's diaphragms.

In short, it's a cartoon world sprung from the mind of an author in love with his own kooky, quirky, outré vision and carried away by his need to shock. Perhaps he is trying to say important things about consumerism, global corporations, the lust for fame, celebrity worship, and the future of feminism. But it all gets lost in the sloppy prose, needless repetition, flat-footed irony, offensive stereotypes, and head-scratching non sequiturs.

But back to poor little Penny Harrigan, who yearns for something more than what she doesn't yet have. She craves actual power, we are told, but she also "wanted people everywhere to know her name and to love her." Finally, just like a woman, Penny "admitted that she didn't know what she wanted."

Into her life comes C. Linus Maxwell, the world's richest man, naturally. He's had a series of high-profile girlfriends, but for some reason, he starts to date Penny, catapulting her into a life of shameless luxury, designer clothing, paparazzi, and ecstatic sex.

You see, Maxwell has dedicated his life to studying the human sexual response in order to develop a line of women's sex toys called Beautiful You, with which he plans to take over the world.

Because in Palahniuk-land, females in Penny's "age group and economic stratum are the target consumers for most of the world's manufactured goods." According to this logic, "Women hold the bulk of the power" because "their longer life spans have left them in control of the greatest wealth." This is the stuff of fantasy, indeed.

The reader is then subjected to unending descriptions of Maxwell testing his products on Penny, who is blessed with "a textbook vagina." After he breaks up with her, she realizes that Maxwell's plans are much more nefarious than merely sexually liberating women from men, and she sets out to save the world.

For, evil genius that he is, Maxwell has implanted nanobots into his sex toys that take over women's wills (weak from the beginning, because they're, well, women) and makes them compulsively buy certain products produced by Max's company, such as clunky shoes and a vampire romance novel. When not waiting in line for Beautiful You items, they are abusing themselves so obsessively with their sex toys that, within a week, they are losing their hair from malnutrition and their looks from sleep deprivation and exhaustion.

In order to save the world, Penny scales the heights of the Himalayas to be schooled by a sex witch named Baba Greybeard (never mind that Baba means "father"), a 200-year-old crone who can tell a person's history just by tasting the juice of her genitals. It was from her that Maxwell learned the darkest secrets of female sexuality (another acolyte was Ron Jeremy). After absorbing all the wisdom this hag has to impart about the sensual arts, Penny returns to Manhattan to…marry Maxwell?

After slogging through what might have made an entertaining short story, the climax of this novel is ludicrous and dumb. Cloaked in the weird and the taboo, what could have been an interesting meditation on feminism, sexuality, and consumerism is just the author's masturbatory exercise in misogyny and shock tactics.

At the end of Beautiful You, this non-white and non-male reader felt used, manipulated, and cheapened, as if an ill-advised one-night stand had paid off with nothing but a serious STD.

Despite a muddled beginning, this propulsive debut rewards persistent readers.