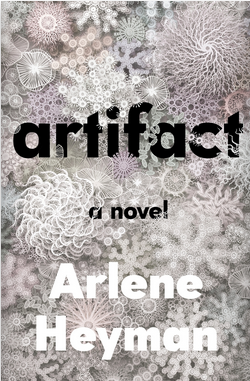 When I started reading Arlene Heyman’s debut novel, Artifact, I didn’t expect to identify strongly with its heroine, Lottie Hart. Not that we don’t have things in common — Lottie, like me, has a stubborn streak a mile wide — but she is at heart a scientist, driven by a curiosity about the physical world and everything in it, while I have always turned to the arts for nourishment and inspiration. Yet since I finished the book, Lottie’s presence has stuck with me, an indelible impression made by masterful storytelling.

Heyman’s task is great: In fewer than 300 pages, she packs four decades of Lottie’s life full of vim and vigor. Interestingly, part one (the novel comprises seven total parts) situates us in middle-aged Lottie’s life rather than her childhood, setting an uncomfortable domestic scene fraught with the tension sometimes inevitable in a blended family. Lottie’s frustrations are evident, although she tries to reason with herself:

“When all of this had come upon her she didn’t know — slowly, imperceptibly, like a pound or two gained every year but overlooked, until one day in passing an interior mirror she saw with surprise a very substantial figure, responsible, solid, a matron…It wasn’t all ballast, was it? Or the weights they drowned kittens with? No, she told herself, she was full and anchored to the wharf of the world.”

Heyman’s narrative technique of starting the story in the unpleasant present creates the impression that the rest of the novel will be devoted to explaining how Lottie ended up in this position. Indeed, the other parts do explore her past — much of it traumatic — but there is beauty and triumph along the way, too.

After an injury ends her boyfriend Charlie’s college football career, Lottie follows him to Texas, where he is to begin graduate school. Her wedding is consigned to a single sentence: “Lottie set out in the kitchen some of the wedding presents that kept arriving by mail — the Mixmaster and pressure cooker and toaster and waffle iron and the Betty Crocker cookbook.”

And if she hadn’t seen a job ad for a lab technician in a pamphlet, Lottie Hart might have remained among her kitchen utensils until she grew old (one of the first big arguments we witness between Lottie and Charlie is about her working, which he does not support). Instead, she joins the ranks of hospital techs, although her journey is endearingly uncertain:

“Lottie had never put a needle in a human being before. None of her colleagues ever seemed to need to learn anything, they were all superwomen; she watched LuAnne carefully the mornings when she drew bloods. Still, on Lottie’s first patient, a forty-year-old colored man with a right below-knee amputation secondary to diabetes, she missed the vein twice. Blood dripped onto his blue hospital gown.”

Although this paragraph does not use emotional language, the stakes are clear, and any reader who has been on the receiving end of a misplaced lab needle is likely to feel its sting. This concise, almost minimalistic reporting style is one of Heyman’s greatest strengths; it leads us to conclusions subtly rather than jamming them in our faces.

Eventually, Lottie leaves both the lab and Charlie behind, but not before she has a little girl named Evelyn. The relationship between mother and daughter is perhaps the most complex of the book, which seems fitting for Lottie: Men and friends come and go, but her own creation is constant.

Still, this does not mean the two are automatically close. When Evelyn is 11, she complains to her mother that she cannot get her homework done in her after-school program, where she spends evenings and often nights while Lottie is working at a new lab as a post-doc in Philadelphia:

“Lottie kept nodding. She feared she would nod off, and not get the grant application in. But there was no missing that her daughter was calling out to her. Would Evelyn grow up crooked, broken? Lottie didn’t think so, but, for sure, Evelyn was growing up behind Lottie’s back. And she was asking her mother to turn around, take a look.”

Instead of doing so, exhausted Lottie “leaned her head down on the kitchen table and fell asleep.”

As Lottie’s story nears present day again, the reader realizes that, despite her momentary anger, her life is not a bad one; rather, it is one she has worked hard to cultivate and maintain. Yet Heyman has one more twist in store for Lottie that will shake her (and readers) to the core.

By now, however, we have enough confidence in Lottie to know she will recover — and even thrive.

Mariko Hewer is a freelance editor and writer. She is passionate about good books, good food, and good company. Find her occasional insights on Twitter at @hapahaiku and contact her at marikohewer@gmail.com.