Anatomy of a Genocide 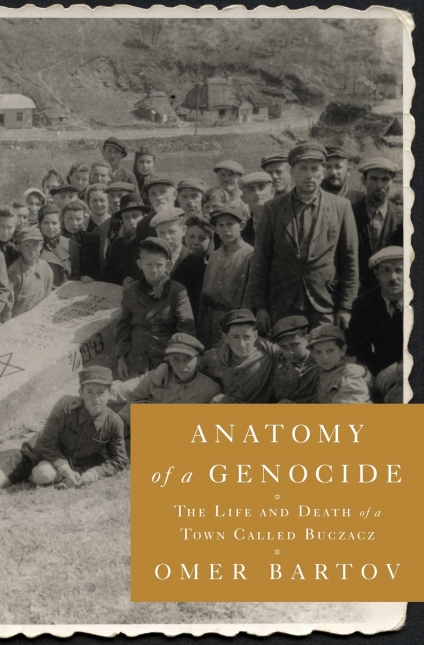 Today, Buchach (Buczacz in Polish), is a small town of some 13,000 people, located in the western part of Ukraine, a “shabby post-Soviet backwater,” according to author and Holocaust historian Omer Bartov. Buczacz is also the town where the author’s mother grew up before she and her parents moved to Palestine and escaped the Holocaust, unlike many other members of their larger family.

For centuries, Buczacz was part of the Polish kingdom, then part of the Austrian Habsburg empire dating from 1772 to 1918. Throughout its long history, Buczacz was not an island of peace and harmony; it suffered through wars between Polish-Lithuanian, Ottoman, and Habsburg-Austrian rulers, and was not spared from the rising ethnic tensions and antisemitism that emerged in the 19th century.

In the 1930s, about 10,000 Jews lived in Buczacz, more than half of the local population. When the Soviets reconquered the town in summer 1944, almost none were left. The remaining Poles fell victim to the Kremlin-guided Ukrainian-Polish population exchange and were sent to newly restored Poland; Ukrainians from Poland moved in, while yet other Ukrainians, suspected of having sympathized or collaborated with the Nazis, were deported to Siberia.

The most destructive period in the history of Buczacz, which occurred between the First and Second World Wars, is the focus of this meticulous study. As Bartov shows, the rise of national ideologies and obsession with ethnic identity were not the only forces that caused the destructive dynamic.

Rather, the incessant seesaw of political and military regime changes that shook the region from the First World War on pitted Poles and Ukrainians against each other — and turned all involved against the Jews.

Occupied by the Russian army in summer 1914, Buczacz was reconquered by the Austrians in August 1915, only to be ceded back to the Russians the following summer. When the Tsarist regime broke down in spring 1917, the Austrians returned.

In spring 1918, the treaty of Brest-Litowsk recognized the independence of a Ukrainian state that, concerned with securing Ukrainian political integrity for the first time in two centuries, methodically discriminated against the Poles.

After further back and forth between Polish, Ukrainian, and even Bolshevik occupations, the Poles took over in 1920 and retained control for 19 years without ever calming the growing ethnic tensions. While Poles and Ukrainians blamed each other for the misery at large and especially for collaborating with the rapidly alternating occupational powers, they indulged their mutual hatred in the spirit of payback.

Meanwhile, the Jews found themselves trapped in the middle, considered by both Poles and Ukrainians as traitors, collaborators, and beneficiaries of the turmoil and regime changes — the perfect scapegoats. When the Soviets took over in the fall of 1939 in the wake of the infamous Molotov-Ribbentrop Pact, the cauldron of persecution and hatred reached a boiling point.

Several years ago, the Yale historian Timothy Snyder’s bestseller Bloodlands drew attention to the unimaginable destruction and bloodshed Eastern Europe and western Russia experienced under Stalin and Hitler. In Snyder’s book, both dictators are driving forces behind this violent dynamic of the 1930s and 1940s. Bartov’s Anatomy of a Genocide, with its intimate focus on Buczacz, is, to date, the most powerful and most convincing counter piece to Snyder’s top-down view.

Not that Stalin and Hitler don’t appear in Bartov’s book. They do, occasionally. The reader is supposed to know about their roles in the human history of inhumanity, and about the German authorship of the genocide of the Jews in Buczacz and other parts of Europe. Neither is further detailed in this book.

Instead, Bartov’s argument dissolves the master narrative of terror, dictatorship, and genocide into a multitude of individualizing perspectives on the local perpetrators, bystanders, and victims of Buczacz and the moral grey zones among them.

Roughly spoken, around two-dozen Germans, in conjunction with some 300 Ukrainians, murdered (or deported to death camps) some 60,000 Jews in the larger Buczacz region within three years. Relying on extensive quotations from primary sources (mostly trial testimonies, but also a few diaries and the like), Bartov unpacks in painful detail the “surreal mix of horror and normality” in German-ruled Buczacz.

As these documents reveal, neither the killers nor their associates suffered guilt over the atrocities they participated in. Even more disturbing than the portraits of violence is Bartov’s spotlight on the “ambivalence of goodness,” the moral quagmire that embroiled the local Christians and eventually swallowed the Jews.

Not all Ukrainians or Poles hated the Jews; some offered help and tried to hide their doomed neighbors. But their motives were complex and sometimes accidental. A dangerous brew of greed, opportunism, and fear spurred individual actions which sometimes transformed selfless rescuers into clandestine betrayers and willing collaborators.

Readers familiar with Bartov’s previous work will be surprised by the style of this book. The author is known for constructing powerful arguments, but grand explanations and theories are absent from Anatomy of a Genocide. Instead, the anatomy unfolds in the mode of description and quotation. In a plethora of direct quotations from trial and other testimonies, the persecutors, the persecuted, and the many individuals who oscillated between the two extremes express their suffering, their indifference, or their cynicism.

Bartov is familiar with the well-developed state of research into perpetrator motivations, the complex reasons for the indifference of Germans and other Europeans to mass murder, and the choice-less choices of its victims.

His decision to leave all that out may be questioned. Narrating evil in the mode of description is tricky; it invites mystification and demonization and portrays the evil of genocide as something that is inexplicable and beyond the realm of humanity — eventually, not part of our world.

But, then, such explanations have been repeated many times and they have not prevented the ongoing cycle of evil acts. In fact, they may have even spread illusions of certainty — the certainty of knowledge — where uncertainty rules. Anatomy of a Genocide urges its reader to remain disconcerted, unsettled, anxious. It comes right in time.

Thomas Kühne is the director of the Strassler Center for Holocaust and Genocide Studies and the Strassler Professor in Holocaust History at Clark University. His most recent books include The Rise and Fall of Comradeship: Hitler’s Soldiers, Male Bonding and Mass Violence in the 20th Century and Belonging and Genocide: Hitler’s Community, 1918-1945.

There’s a lot to say about fish in Fornells.

The Unwritten Book: An Investigation

This unusual, challenging work will resonate with (some) readers.