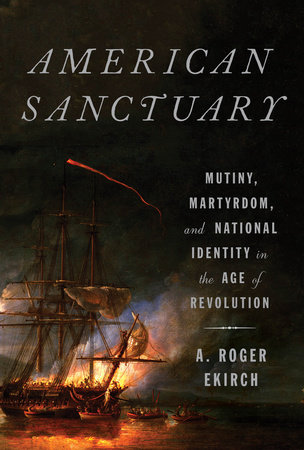 A. Roger Ekirch has done it again. He has discovered a virtually unknown subject, conducted thorough research, and written a vivid and elegant book. In 2005, his At Day’s Close explored the human experience of night. By rediscovering a bifurcated pattern of first- and second-sleep prevalent before electricity and artificial lighting disrupted our circadian rhythms, Ekirch became one of the rare historians whose work is cited by medical scientists throughout the world.

In 2010, Ekirch’s Birthright traced the travails of a young English aristocrat whose escape from indentured servitude in America inspired Robert Louis Stevenson’s classic novel Kidnapped. Now, in American Sanctuary, he presents a three-act story about a long-forgotten poster child for the cruelties of impressment (the notorious British practice of recruiting sailors by force that was a cause of the War of 1812), a grisly naval mutiny in 1797, and its far-reaching domestic and international ramifications.

Exacerbated by world events, American politics were ugly and divisive in the 1790s — almost as nasty as the 1850s and certainly as discordant as anything since the Civil War. The French Revolution and the wars that it spawned were like a funhouse mirror that exaggerated the blemishes Americans perceived in one another while translating the Constitution of 1787 into a functioning national government, and while President George Washington tried to maintain neutrality against the opposing forces of Britain and France.

Look at England, came the Jeffersonian reply, tyrant of the seas, driven into debt and corruption by its war machine and threatening “the liberty of the whole earth.”

After a tie vote in the electoral college between Jefferson and Aaron Burr, the presidential election of 1800 was finally decided in the House of Representatives, putting Jefferson in the unfinished White House and making John Adams the nation’s first one-term president. American Sanctuary adds fascinating dimensions to that story, for Adams’ loss resulted, in part, from his handling of a mutiny aboard the frigate HMS Hermione on September 21, 1797 — the bloodiest in all of British naval history.

Military discipline was harsh everywhere in the 18th century, but the officers of the Hermione were especially notorious for their cruelty and for practicing impressment so vigorously that it was tantamount to kidnapping. On a single day in 1795, raiders from the Hermione boarded 20 American merchant ships and forced nearly 70 sailors (most of whom claimed American citizenship) into service aboard the British frigate.

And those seamen soon learned that discipline aboard the Hermione was sadistic. Captain Hugh Pigot did not live to record the statistics for his new command, but in 12 months on his previous frigate, he had subjected its 170-man crew to 85 floggings totaling 1,400 lashes. By way of comparison, the infamous Captain William Bligh had ordered punishments totaling only 30 lashes during the entire course of HMS Bounty’s voyage to Tahiti a few years earlier.

Perhaps not surprisingly, mutineer Fletcher Christian and his comrades spared the lives of Bligh and 18 loyal crewmen when they seized command of the Bounty in April 1789. Set adrift in a longboat, Bligh’s party made it back to England by the following April, while Christian and the others escaped to Pitcairn Island and Tahiti.

Off the western coast of Puerto Rico in 1797, the mutineers of HMS Hermione were more ruthless. Brandishing swords and axes, they struck at the heart of Britain's military authority and hierarchical social order by killing Captain Pigot and all 10 officers from the frigate.

These swashbuckling tales of mutiny and the subsequent manhunt throughout the Caribbean, during which British naval authorities exacted grim justice (or revenge) upon the mutineers, make American Sanctuary a real page-turner.

In 1799, the surprise capture of the alleged ringleader in Charleston, South Carolina, suddenly thrust the bloody affair into American politics. Identified as Thomas Nash and accused of mutiny by an officer who had served on the Hermione prior to the fateful voyage, a sailor who claimed to be Jonathan Robbins, an American, was jailed in Charleston on suspicion of murder. The British consul requested his extradition, but officials in Charleston, including a Federalist judge, denied the request.

When the British ambassador appealed to Secretary of State Timothy Pickering, however, that self-righteous descendant of a hanging judge at the Salem Witch Trials ignored all objections and recommended extradition to President John Adams. The man calling himself Robbins was handed over to British justice, tried by an admiralty court, and summarily hanged.

Pickering’s advice soon proved a huge and untimely mistake, for Adams’ opponents were angry over his administration’s Alien and Sedition acts. Outraged by Robbins’ extradition to a “foreign belligerent power,” Jeffersonian newspapers declared him a martyr to liberty and warned readers that “the cause of Robbins yesterday, may be yours tomorrow.”

Amid disputes over immigration, the constitutional protections owed to political refugees, and the separation of judicial and executive powers, the victorious Jeffersonians invoked a lasting vision of America as a haven from persecution. “Shall we refuse to the unhappy fugitives from distress?” Jefferson asked in his first inaugural address. “Shall oppressed humanity find no asylum on this globe?”

Henceforth, the perceived martyrdom of Jonathan Robbins, aka Thomas Nash, shaped American extradition law until the Reagan administration, as the nation embraced a broad definition of citizenship rooted in the concept of liberty. The Robbins case, as Roger Ekirch explains in this sweeping and eloquent book, “helped to widen America’s open door to immigration.”

Jon Kukla is author of Patrick Henry: Champion of Liberty.

The Compton Cowboys: The New Generation of Cowboys in America’s Urban Heartland