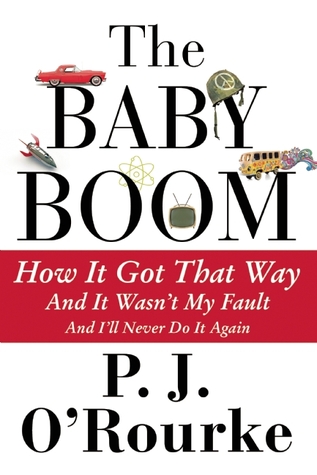 Ask Pete Townshend, who’s 68 now, about his comment, “Hope I die before I get old,” or 73-year-old Jack Weinberg, famous for saying “Don’t trust anyone over 30” at a UC Berkeley protest back in 1964.

Or maybe ask 66-year-old P. J. O’Rourke, a former National Lampoon editor whose writing for the irreverent magazine included “How to Drive Fast on Drugs While Getting Your Wing-Wang Squeezed Without Spilling Your Drink.” That piece was a hilarious rant fulfilling the instructions promised by the title while observing that risky behavior is better for the young because “some fifty-eight-year-old butt head” is “just waiting around to see what kind of cancer he gets anyway.” Ironically, in 2008, O’Rourke himself was diagnosed with cancer, which he has written about elsewhere with courage and humor.

Since the NatLamp days, O’Rourke has morphed into a conservative curmudgeon, responsible for a total of 17 books with titles including Republican Party Reptile and Give War A Chance. While his political biases occasionally come across more as mean-spirited than amusing, he writes on a wide variety of subjects and doesn’t hesitate to poke at anyone or anything.

In O’Rourke’s latest book, The Baby Boom, he unabashedly lampoons — or perhaps more accurately, harpoons — his entire generation, the 76 million Americans born between 1946 and 1964. It’s a worthy target although it’s been hit many, many times by others who aren’t as observant or as witty. Aiming squarely at it helps sell books. That’s because Boomers love to look at themselves in the mirror — even if, as O’Rourke points out, they sometimes see their parents looking back at them. Often, though, they’re fawning over their younger selves: “We have an abiding admiration for our own larval state.”

Boomer childhoods have affected the world in a multitude of ways, and O’Rourke makes some clever connections. Consider, for instance, the impact of playing board games like Monopoly: “Despairing of pages and pages of rules, we’d make our own.” This game, he says, led to the creation of Wall Street investment strategy and Washington economic policy, both invented by the Baby Boom generation. O’Rourke also claims that Boomers, who invented selling “Get Out of Jail Free” cards to the highest bidder, are connected to the origin of the derivatives market and the real estate bubble: “we made deals with each other that were so complex that by the time six hotels had been placed on Baltic Avenue none of us had any idea what we were doing.”

Boomers apparently learned all the wrong lessons from growing up in an era when George Orwell’s Nineteen Eighty-Four was still figuratively and literally futuristic, and when communications were almost all face-to-face or on a shared (“party”) telephone line where discretion ruled. “That it would be wonderful to tell the world one’s every thought and feeling hadn’t occurred to people yet,” O’Rourke writes, before indicting his generation for inventing electronic personal communication devices (“TV that watches you”) and over-sharing via social media.

The decade most closely associated with the Boomers, of course, is the Sixties — that fondly-remembered revolutionary era when everything seemed to change, some of it for the better. O’Rourke says the Sixties were merely an echo: “Everything the Baby Boom set out to do in the 1960s had been done already, forty years before,” and suggests that the Roaring Twenties were “a failed experiment at having a Sixties, like a first attempt at a space launch blowing up on the pad.”

He does concede that Boomers learned a few things from the Sixties, noting that buying and selling drugs may have led to a clearer understanding of the metric system. But other lessons didn’t take, he says, accusing the generation of consistently choosing inept leaders. “Follow Keith Richards and you can wind up some sort of trouble,” he sagely notes, using the statement to justify foaming about today’s politicians and veering off the tracks with speculations that a pair of Sixties terrorists are pals with President Obama.

By the end, O’Rourke broadens his focus and begins complaining about generations other than his own, causing the book sometimes to read more as bitterness than humor. After suggesting that Boomers are “riding down the highway of life in a Welfare Cadillac (with the right turn indicator blinking for miles and miles),” he says tax rates will skyrocket — “which should keep those Generation X slackers busy, and maybe take their minds off Kurt Cobain dying.”

Even though The Baby Boom isn’t as funny at the end as at the beginning, it contains some nice bits about Boomers that seem to have escaped from a stand-up comedy routine: “We grew up. We got married. We found true love. This wrecked the marriage. But we’re a caring generation. Sometimes we take care of the kids on weekends.”

He also nods gratefully to his elders several times during the book, pointing out that “the Greatest Generation integrated the armed forces and Little Rock Central High, passed the Civil Rights Act, sent their daughters to law school, and founded the gay liberation movement by watching Liberace on TV.” But he also blames them for the “butcher’s bill,” citing all the Vietnam War casualties “for a purpose that has yet to be explained.” (On that same theme, he adds that previous generations “did fuck-all to prevent or pre-empt” World War II and the Korean War.)

So despite all the selfish, stupid and greedy tendencies O’Rourke identifies in his fellow Boomers, how does he think his famed population cohort stacks up? He claims they are “the best generation in history. Which goes to show history stinks.” It’s hardly a surprising or profound conclusion. Fortunately, the fun of reading The Baby Boom is in the journey, not reaching the destination.

Postscript: In an effort to promote The Baby Boom, O’Rourke recently published an article in AARP, the Magazine. It takes a somewhat more upbeat tone, reflected in the headline: “How the Boomers Saved Everything.”

Randy Cepuch was born in June 1955, smack in the middle of the Baby Boom era.