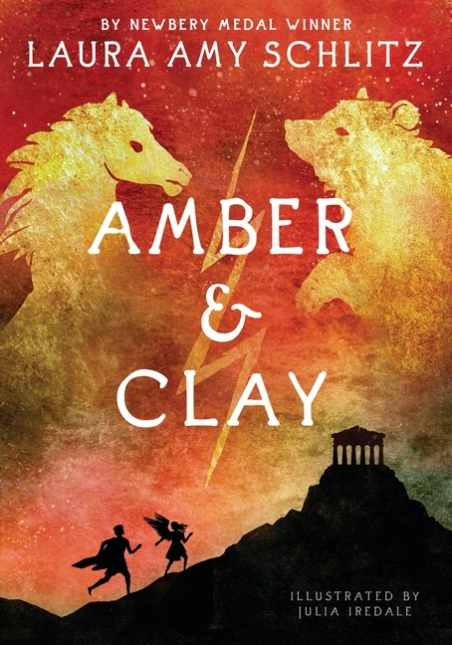 The god Hermes draws readers into “the tale of a girl as precious as amber, / the tale of a boy as common as clay” as he introduces Melisto, a pampered girl in Athens, and Rhaskos, a Thracian slave. Although close in age, the two “weren’t alike, but they fit together, / like lock and key.” In normal circumstances, they would never meet, but what is ever normal when the gods are watching?

In Amber & Clay, their stories begin when both are young children. In segments of verse, Rhaskos remembers his early years as a slave up to the night his mother tattoos him in the Thracian tradition, only to be sold before she can explain the markings to him. Renamed Thratta, Rhaskos’ mother joins Melisto’s household, where she is meant to tend the little girl and ease some of the child’s wildness.

While Rhaskos misses his mother and treasures small moments of beauty observing the horses in his master’s stables in Thessaly, Melisto has her own struggles in Athens. Her mother resents Melisto’s disobedience and willfulness. She also fears that she will “crack her skull / or black her eye, or shake her / so hard” that she will break her daughter’s neck.

Rhaskos’ lyrical, carefully structured blank verse provides contrast with Melisto’s prose passages as the story weaves in voices from Hermes and Hephaistos to Athena and Artemis, among other members of the Greek pantheon. A comprehensive author’s note explains the creative choices Laura Amy Schlitz made in drawing from Greek history and embracing the strophe-antistrophe technique common in Greek plays — as seen in the “Turn and Counterturn” poems, where two characters share their different perspectives on parts of the plot. The book also includes a helpful cast of characters at the beginning.

Archaeological images (illustrated by Julia Iredale) and exhibit-style captions add further dimension to this sprawling narrative. Artifacts that prove key to the story include an “unusually fine” amber gold necklace “found on the Athenian Akropolis, near the ruins of the Sanctuary of Artemis Brauronia”; Rhaskos’ first pottery casting; and others.

Everything changes for both children when Melisto is called on to serve as a Little Bear at the Sanctuary of Artemis in Brauron. As Hermes explains: “My point is: little is known. / What was meant to be a mystery / is still a mystery. / Except we’re going to lift the veil a little, / and peek. We’ll see Brauron / through Melisto’s eyes— / Melisto’s going to Brauron, / to serve as a Little Bear.”

At the sanctuary, Melisto enjoys unprecedented freedom, allowing her to explore nature, indulge her wildness, and finally thrive as she begins tending a bear cub reserved for a future sacrifice to honor Artemis. Back in Thessaly, Rhaskos’ world becomes even smaller under his abusive new master, Menon, inspiring Hephaistos, the god of fire, metalworking, and masonry, to form a plan to intervene on Rhaskos’ behalf to “send my boy to Athens / and wrest him away from Menon.”

While Melisto decides to honor what she knows is right at Brauron despite Artemis’ supposed wishes, and Rhaskos dreams of a life where he is free and able to make art, events are set in motion that will put the pair on a life-changing, utterly unexpected collision course.

Schlitz’s ambitious standalone middle-grade story is meticulously researched and brings ancient Greece to life as Hermes instructs readers on the country’s proper name (“Don’t call it Greece”), and Rhaskos is shown Athenian attractions like the Trojan Horse and the Akropolis, where “the stones of the temples were bathed in gold” for the first time.

What begins as a story about a spoiled girl and a common boy becomes, in the author’s capable hands, a much larger commentary on art, friendship, and identity as we watch Melisto and Rhaskos transform, becoming “the girl as electric as amber, the boy, indestructible as clay."

The Evening Spider: A Novel