All Who Go Do Not Return: A Novel 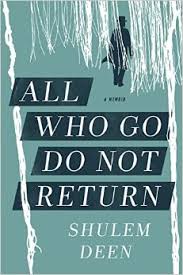 At the conclusion of All Who Go Do Not Return, an often wrenching memoir of lost faith, Shulem Deen acknowledges that his truth “was not the only truth” and that others he writes about might see things differently. It seems like a small but important concession ­to his years-long struggle to reconcile faith and reason in the ultra-Orthodox world of Hasidim, or “the pious ones,” whose roots date back to 18th-century Europe.

The Hasidim, who encompass several, sometimes competing, sects, are improbably ensconced in New World versions of Eastern European shtetls, in exclusively Jewish enclaves in parts of Brooklyn and in Rockland and Orange counties in Upstate New York. Residing in villages such as Kiryas Joel and New Square, their first language is Yiddish, a form of German that first appeared in medieval Europe, and their English is heavily-accented. Hasids pay absolute obeisance to a rebbe, the dynastic spiritual leader whose word is law.

Women and men are strictly segregated, even having to walk on opposite sides of the street. Young men are forbidden to gaze at women prior to marriage. To discourage men from engaging in errant behavior, women wear long-sleeved blouses and skirts and wigs under turban-like head coverings. The men are also austerely attired, in black hats and long black coats.

Men and boys spend their days praying and studying the Talmud (6,200 pages of rabbinical teachings) and the Torah (the Five Books of Moses and commentaries on Jewish law and practice). A woman’s role, meanwhile, is to bear many children (birth control is forbidden) and to maintain strict religious practices at home, including following the dietary laws of kashrut and prescribed nights for tashmish hamitah or the service of the bed (i.e., sexual intercourse). Marriages are arranged, and bride and groom often spend only a few minutes together before their wedding.

This is the fundamentalist world in which Shulem Deen was raised and which he ultimately left in order to make his way in the secular world. His former community and even his own children have shunned him for this. It has been a painful journey, by his account, which began with his expulsion from the village of New Square for being a heretic, an apikorus. His major crime was that he counseled a young member of the community who had also been questioning his faith. Deen’s ultimate path was foreshadowed by his own parents’ backgrounds: His mother was a Beatles fan as a teenager, and his father was part of the San Francisco psychedelic and protest scene. They could be described as hippies before they chose to adopt an ascetic “pious” life. As such, they were bal-chuvah, or non-observant Jews who become religious.

Deen was a mischievous child and was expelled from yeshiva — where boys and young men study the Torah — but was still in his own way a devout Jew. He relished the weekly tisch, a dinner at which supplicants brought food to the rebbe, which he shared with them. Deen prayed religiously, following the prescribed blessings at the prescribed times at home and at synagogue. Like other Yeshiva boys, he married a young woman he’d barely met at the age of 18, and the union produced five children.

He taught at the yeshiva, and their life was subsidized by government food stamps, Section 8 housing, yeshiva “vouchers” that were accepted at many local stores, and payments from a federal program to teach secular subjects, which was fraudulently unimplemented. But, as his family grew, he could not make ends meet and began to look outside for new sources of income.

Eventually, he got work as a self-taught computer programmer, and his curiosity about the world beyond New Square grew, insatiably. It began with the radio, his wife would later say. It was part of the tape deck, and he would listen to it furtively at night. Then came the public library, a computer, Internet chat rooms, and, finally, a television. On shabos, or Sabbath, he would leave to go to synagogue but then cross the street to an empty building where other apostates secretly gathered. Otherwise, he writes, “I was a heretic among believers.”

As his doubts rose, he sought rabbinic counseling and was advised, “If you look inside your heart, you’ll find the truth.” Deen’s writing soars, as he recounts: “I looked inside my heart and discovered there was no truth, anywhere, not inside my heart and not outside it, only the scalding furnace in which my beliefs were now smoldering embers.”

Ultimately, it was his counseling of the questioning youth that reached rabbinical ears and resulted in his expulsion. Deen and his family moved to nearby Monsey, NY, where his wife and children knew no one and were as isolated as Deen had been in the Hasidic community of New Square. The marriage did not last. After 15 years, in December 2007, when Deen was 33, they divorced, and then the family estrangement worsened. The final affront came when his ex-wife abruptly ceased all communication with him, even though they had joint legal custody of the children. It was, he later learned, due to rabbinical “advice.”

Deen sank into a deep depression, even becoming suicidal and requiring hospitalization. Eventually, he emerged from this dark valley of the shunned to begin life after Hasidism.

Comparisons to the Amish, to the blind adherents of the Rev. Moon, even to the Mormons are tempting. But the life of the Hasidim seems in ways even more severe and constricted. Jonestown may be more apt. I began to wonder if, had the rebbe willed it, the residents would commit mass suicide, as did the obedient flock of Rev. Jim Jones in the Guyanese jungle in l978.

Today, Deen operates a website called Unpious, a play on both the English word and on the Yiddish word payess (the long side curls worn by ultra-Orthodox men). He seems to have found comfort and company with other former Hasids, but still yearns for his lost family, especially the children — three daughters and two sons — who to his knowledge continue to reside in New Square, following the dictates of the rebbe and living the pious life he forsook. “All who go do not return,” a paraphrase from the Book of Proverbs, is the title of this affecting book. And so it is for Shulem Deen.

Eugene L. Meyer is the editor of B’nai B’rith Magazine and a board member of the Washington Independent Review of Books.

Body by Darwin: How Evolution Shapes Our Health and Transforms Medicine

A fascinating, sometimes complex look at how DNA, natural selection, and the environment combine to impact humans’ well-being.