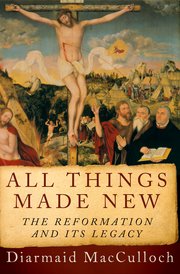 Scholars and critics tend to run out of superlatives in praising the extraordinary achievements of Sir Diarmid MacCulloch, who holds the chair in the History of the Church at Oxford, but his magnificent Christianity: the First Three Thousand Years and subsequent masterwork, The Reformation: A History, have brought him not only to the pinnacle of scholarly reputation, but also a wide general readership.

His powers of synthesis, integration of the latest research, and uncanny mastery of telling detail fascinate and engage readers who would not normally gravitate towards the history of religion, but find themselves turning these pages with the avidity they normally expect only good novels to stimulate.

Who would imagine finding such scholarship conveyed not only with poise and justified confidence, but in a style imbued with humor and subversive wit?

All Things Made New: The Reformation and Its Legacy brings us a substantial collection of 22 brilliant essays exploring facets of the Reformation, divided into three categories. The first presents various topics from the wider European scene, including a remarkable portrait of John Calvin, an account of the Council of Trent, an exploration of the Italian Inquisition, and intriguing inquiries into the role of Angels, and the place of the Virgin Mary in the thought of the Protestant Reformers.

The introductory essay, “Christianity: the bigger picture,” succinctly makes the case for the contemporary importance of getting to understand the 16th-century reformations, Catholic and Protestant, using new tools and perspectives that require us to lay aside old misconceptions.

The second section covers the English Reformation, a field in which MacCulloch has specialized since the publication of his acclaimed biography of Archbishop Thomas Cranmer. The essays deal, of course, with Henry VIII, Cranmer, and the making of the Prayer Book, as well as the successive translations of the Bible. In addition, there is a notable exploration of the lives of Elizabeth and Mary and a fascinating treatment of the career of the musician William Byrd.

The Reformation in England, Scotland, and Ireland is notoriously difficult to interpret, but MacCulloch brings surprising and even delighting clarity and insight to areas obscured by popular myths. American readers may be especially pleased to find to find a most intriguing discussion of the origins and influence of the Bay Psalm Book, the first book printed in British North America, that is full of insights into early American Protestantism.

The third section steps further back to explore how later generations have forged narratives about the English Reformation for what we might call successive ideological purposes. MacCulloch is far from being a crude debunker but his exposure of the biases of later historians and churchmen is deft and sure.

Here he places his scholarly analyses at the disposal of contemporary efforts to grasp in particular the nature of Anglicanism itself in its current state as a worldwide communion. The stresses and challenges it faces require just the kind of searching reappraisal of Anglican origins and history that he is almost uniquely qualified to provide.

He doesn’t hold back from a lot of penetrating observations about current controversies. Being a very outspoken gay man as well as an ordained deacon of the Church of England brings a certain outsider perspective and a consequently keener edge to his critiques. We can’t think now about the history of early Christianity without bearing in mind that the Churches of the East that are now dwindling almost to nothing in the upheavals of the middle east, once constituted two-thirds of the Christian world.

But, as well as shifts in our grasp of the big picture, this historian rewards us with hundreds of intriguing “who knew?” moments about matters great and small. We encounter Transylvania as the location of pioneer efforts at religious tolerance. We realize that the almost accidental preservation of the English Cathedrals and their richer styles of worship by Queen Elizabeth meant that resources and traditions were sustained from which, a couple of centuries later, worship at a parish level would be re-enriched and revitalized. There is hardly a page in the entire work that does not elicit that “well, that is intriguing” remark to ourselves, a sign of the pleasure we find in truly meaty reading.

MacCulloch changes the way we think, which is what scholarship is for.

Martin L. Smith is an Episcopal priest, author and retreat leader. He is author of a number of books exploring contemporary spirituality, including A Season for the Spirit, The Word is Very Near You, Love Set Free, Reconciliation, and Compass and Stars. His latest book, written with the Rev. Julia Gatta, is Go in Peace: the Art of Hearing Confessions.