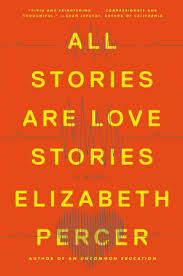 I imagine Elizabeth Percer's novel All Stories Are Love Stories has particular resonance for people who have lived in San Francisco, because the way Percer describes the city forms its own love story: "Every morning in San Francisco was a bit like waking up on the edge of the earth: beautiful and damp and wild, full of the strange music people make, open-armed, into the wind."

In Percer's book, this "edge of the earth" city is tried one Valentine's Day, when two earthquakes rip through it. Pulled apart or flung together by the disaster, characters have to find their paths — physically and emotionally — to each other. Percer is a poet as well as a novelist, and her literary command, which also has elements of magical realism and the headlong suspense of a thriller, forces you to take your time.

You pace yourself and pay close attention as you read. One character, for example, "couldn't shake the sensation of walking through an abandoned set, the structures only cleverly designed props for a play that had suddenly been canceled, a play that had, until this afternoon, included his life among its plot lines."

The novel revolves around two couples. The first, Max and Vashti, has been apart for many years after a traumatic breakup. Max is an events coordinator, a devoted San Franciscan who wonders how "thinking about love could help it along, anyway?" Vashti is a baker who takes her work seriously; preparing food has helped her through a trying past. "Every dough must contain life," she thinks. Then they find themselves trapped under rubble, reunited and forced to evaluate what drove them apart, and what the elapsed time could mean for a future together.

Gene, half of the second couple, is a geologist forced to grapple with his specialized knowledge as the earthquakes hit. He strikes off across an apocalyptic landscape to get back to his partner, Franklin, whose illness sharpens their mutual need. After the quake, "Gene looked desperately around him, searching for someone to give him guidance, realizing as he did how much he lived every moment of his life with Franklin by his side." The book looks back in time into these couples' romances as it moves forward through the disaster.

Even beyond these four characters, All Stories Are Love Stories explores how pairs of people motivate each other, and the many ways we can become connected to another person. Two sisters, two lovers, parent and child.

"It was strange how, in such moments, the bodies of mothers and daughters no longer recognized separation," Percer writes, "as if the physical self could lose track of its own boundaries." Permeability of lines between things like past and present, single and coupled, alone and together is a common thread throughout the book, which ruminates on how these categories dictate and shape our behavior and lives.

Percer grounds her imagined disaster in reality by including quotes from contemporary reports of the San Francisco earthquake of 1906, when drought conditions meant that there was no water to extinguish the flames after the quake. We're reminded how quickly nature can upend humanity, and the novel borrows both gravitas and urgency from these historical moments. "It was too clearly apparent that San Francisco was doomed," one reads. Throughout, Percer stays away from disaster-movie clichés with scenes are that are unique to the city's history, including an eerie moment featuring abandoned ships.

This is a book to savor, even as the catastrophe at its heart makes you want to flip pages to find out who survives and how. All Stories Are Love Stories stands as an ode — a poem? — to San Francisco, but it's also a love story for the rest of us. We need this testimony to the connections we spend our days seeking, nurturing, and maintaining, even in the face of something as devastating as two earthquakes shaking an adored city to its core.

Eliza McGraw is a Washington writer. She is the author of Here Comes Exterminator!, which is about the 1918 Kentucky Derby winner, and will be published by Thomas Dunne Books in April.