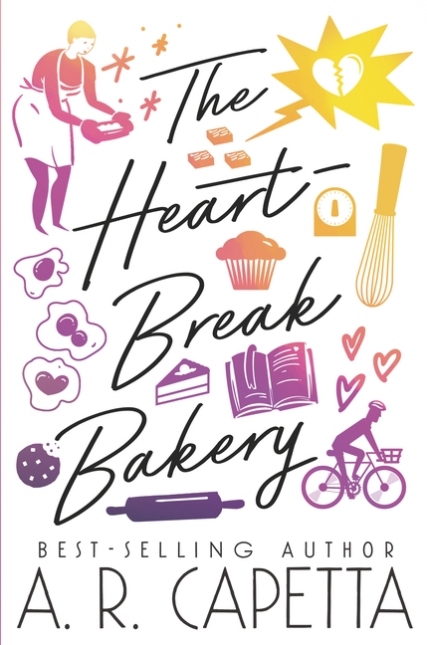 Seventeen-year-old Syd, who works at the Proud Muffin, is an "agender cupcake" with a lot to figure out about love and the literal magic of baking.

Syd (no pronouns, please) has been with the same girlfriend since coming out as queer in middle school. Four years later, it turns out the relationship Syd thought was perfect has more cracks than a badly set cheesecake, leading to a drawn-out breakup with W over one painful weekend. As Syd notes, "I think she’s great, and she thinks I like having a girlfriend too much to notice that sometimes she isn’t."

Still smarting from the breakup and feeling blindsided, Syd does the obvious thing for a teen holding down a job as a baker while finishing high school: try to bake it out with an easy recipe for brownies that "require three things: a single bowl, a sturdy spoon, and a dedication to dark chocolate."

Syd's baking catharsis takes a turn when the post-breakup goodies turn out to be magical Breakup Brownies with all of Syd's anger, frustration, and hurt baked in. Instead of letting Syd process those pent-up feelings, Syd has accidentally fed several customers brownies that precipitate their own breakups — whether the splits are warranted or not. Obviously, Syd feels awful and wants to erase the "special tang of guilt that comes with subtracting so much queer love from the world."

Things get even worse when Syd witnesses the bakery’s owners — and husbands — Vin and Alec eat the treats and start fighting, too. Every pastry chef knows you have to clean up your own kitchen, but now that the Breakup Brownies have drawn the Proud Muffin into their vortex, Syd is even more frantic to correct this magical mistake before it inadvertently causes the best queer bakeshop in Austin to shut down.

Proud Muffin's cute bike-delivery person, Harley (he or they — it's always on the pronoun pin; check first) is surprisingly receptive to Syd's magical baking confession and, even better, ready to help mend broken hearts across the city. As Syd works through an impressive culinary repertoire ranging from Very Sorry Cake to Shiny New Scones, Syd is able to bond with Harley and process the breakup with W while trying to fix all the collateral damage. The only problem is that as Syd's feelings for Harley grow, it's unclear if their chemistry will lead to a recipe for romance or more heartache.

The Heartbreak Bakery is an ode to the city of Austin, queer communities everywhere, and baked goods in all their wonderfully varied forms. Fictional locations like the Proud Muffin complement actual Austin locales like Barton Springs and 24 Diner. Syd and Harley are white, with a diverse supporting cast that includes characters from across BIPOC and LGBTQ+ communities and showcases the intersectionality of many identities.

Even as a member of the Proud Muffin's enthusiastic and supportive queer community, Syd struggles to articulate to friends and family what it feels like to be agender when "every single time [Syd] stared at the mirror…what [Syd] saw screamed back girl." Now Syd is "pretty sure that no particular body would make sense…all of the time" but also isn't always sure how to explain that to anyone as easily as others share their pronouns.

Each chapter ends with a recipe, sometimes for actual baked goods readers can make — like the peach, strawberry, and basil Honest Pie — and sometimes for abstract concepts like Today's Gender or Baby's First Polyam Brunch. All of them are written in Syd's distinct, wry narration with witty asides like:

“Realize you probably should have added the zest earlier, but you've been distracted by the presence of a cute baking partner. Realize that everything is going to turn out delicious either way.”

Part rom-com and part bildungsroman, The Heartbreak Bakery beautifully follows Syd through the madcap quest to undo the damage of the Breakup Brownies while also unpacking Syd's fledgling relationship with Harley and journey to fully vocalize their identity as agender (with help from freshly baked Agender Cupcakes, of course) and find their people — agender, magical baker, and otherwise.