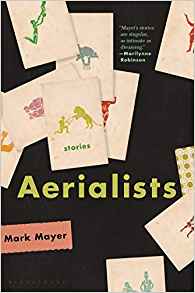 In the final short story of Mark Mayer’s debut collection, Aerialists, a miniature train, part of an elaborate set in a man’s basement, carries a traveling circus. The writing on the banner car promises “HIDEOUS MONSTERS! and BREATHTAKING BEAUTIES! and CATS! and ELEPHANTS! and CLOWNS!”

The list serves as a kind of table of contents for Mayer’s stories, indexing the creatures he collects under his sprawling big top. Elephants and cats and (murderous) clowns are overrepresented in his pages, at least relative to most contemporary fiction, though that isn’t saying much. Overrepresented, too, are children, who constitute the protagonist and/or narrator in five of the nine stories.

The surreal or carnivalesque is refreshing in Mayer’s writing; the fantastic and the ridiculous are handled with measured sentences and clear, unexaggerated prose. The quality of the stories’ structure is what one has come to expect of Iowa Writers’ Workshop grads: The pacing never drags, and the narratives turn neatly, usually without sacrificing surprise.

“The Wilderness Act” and “The April Thief,” for example, both achieve a near-perfect balance in this way, while the titular “Aerialists” proceeds along a more expected path.

Mayer has a tendency to coin neologisms, sometimes when necessary or clever and sometimes when neither. To wit: The “multivitamined” conference attendees in “The April Thief” strike a chord, but elsewhere, one is not quite sure what an “eye tunnel” is, or why a man “PayPalled” a fee he might easily have sent.

Still, Mayer’s stories attain a level of grace that owes something to his frictionless sentences. He never wastes a paragraph; there is absolutely no chaff, but neither do individual moments call attention to themselves. Aerialists is not particularly quotable, for better or for worse.

It is, rather, Mayer’s carnival of characters that I find myself carrying around in my head: the old man with the train set in “The Ringmaster,” or the adopted, mathematically inclined child of two communists in “Solidarity Forever.”

In every story, someone is leaving or being left. In “The Strongwoman,” a young boy’s father has left his mother, who has begun a relationship with a female bodybuilder. Like other children in Mayer’s stories, the boy feels deeply the betrayals exacted upon him, but doesn’t know enough to understand precisely how the betrayal works or why it is happening. Neither is he able to affect the outcome.

Within this poignant blend of knowledge and ignorance, Mayer’s portrayal of childhood becomes exquisite. We all usually know, he seems to say, when a departure is imminent. Like severe weather, it’s simply in the air, an instinctual thing — even if we cannot explain, in adult terms, how the leaving will be done.

In “The April Thief,” another narrator, again a child, is caught between two adults in a faltering marriage. This time, the mother leaves. “What kind of stupid story was life turning out to be?” thinks the child.

Only on occasion do characters fail to realize a story’s potential. “Twin” stands out as the weakest of the nine. In it, Maple, best friends with a formerly conjoined twin — Sasha, a deaf 13-year-old in a wheelchair — travels with her friend’s family to Niagara Falls. Maple’s father, the story hints, plans to attempt suicide while she’s gone. But the plot partly turns on Sasha “hearing” a song played through the car stereo.

After several reads, I still couldn’t puzzle out whether the telepathic dialogue between the two girls, set apart in italics, is in Maple’s imagination, or if Sasha is only partially deaf. The ending doesn’t provide significant support for either theory.

Still, Aerialists is full of weird, singular stories articulated in bracing and unusually disciplined prose. Mark Mayer’s carnival of oddities is worth the price of admission and, like the model train’s banner car, leads one to believe that more delights lay in store.

Daniel Weaver is the social media and marketing coordinator at East City Bookshop in Washington, DC. His writing appears in Radii, the Full Stop Mag Blog, and elsewhere. Find him on Twitter at @danielaxweaver.