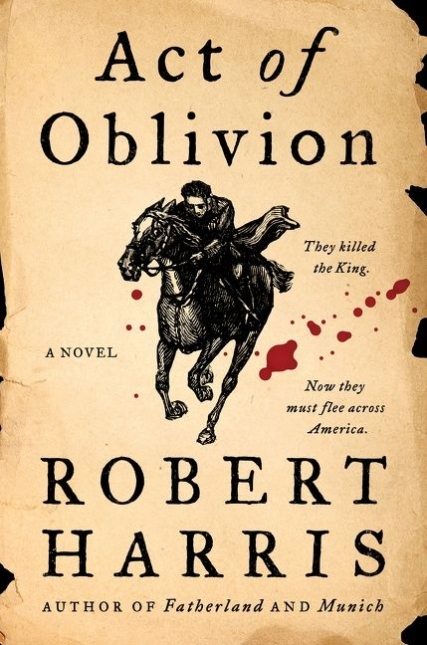 Don’t let this book’s blood-spattered cover illustration (a man atop a galloping horse) or its tagline — “They killed the King. Now they must flee across America.” — fool you. What follows in Robert Harris’ latest work of historical fiction is hardly a white-knuckle chase through the colonies. Instead, Act of Oblivion unfolds in a manner that would satisfy the 17th-century Puritans who populate the story: slowly, conservatively, and in consultation with scripture.

That’s not a bad thing, though neither is it terribly riveting. Instead, the pleasures of this intelligently crafted novel — the author’s 15th — lie in how deftly Harris conjures a long-ago period likely unfamiliar to the non-royalists among us.

It’s 1660, just over a decade since the execution of Charles I. His death brought an ending to the English Civil War, and with it, the monarchy’s reign. Now, the rebel Oliver Cromwell is dead, too, and his parliamentarian forces out of power. The crown — via the beheaded king’s son, Charles II — is newly restored, and an exhausted England is eager to move beyond the carnage of its recent past.

In the spirit of letting bygones be bygones, the Indemnity and Oblivion Act has been issued. It provides a general pardon for anyone who committed crimes during the war. There’s one notable exception, however. The regicides — the 59 men who signed Charles I’s death warrant — must die. And no quick dispatching via broadsword for them. Instead, a traitor’s end:

“The instruments of death set out at Charing Cross so that the regicides could gaze their final hour upon the Banqueting House where they put the King to death…the mounting of the ladders, their final speeches, the hangman pushing them off, the brief dangling from the rope until consciousness was lost, the cutting down, the bucket of water thrown in the face, the cutting away of clothes, the sharp knife flourished to the crowd, the severing of the cock and balls, the screams, the blood, the ecstatic groans and cheers of the mob, the slash of the blade through the stomach lining, the dragging out of the entrails with red-hot tongs and corkscrews — yard upon yard of glistening pink tubing, like strings of sausages dangling in a butcher’s shop — cut up and thrown on to the coals, the stench of the frying innards, the pulsing heart plucked out…”

Any regicides still at large have a strong incentive to remain so. But the tenacious Richard Nayler, secretary of the regicide committee of the Privy Council, has made it his quest to track them down, especially the two — Gen. Edward “Ned” Whalley and his son-in law, Col. William Goffe — who escaped to America. Part of his zeal to apprehend these particular men comes from his devotion to the monarchy; part is a personal vendetta.

But finding the pair won’t be easy. The Revolutionary War may be a century away, but the colonists are already a restive lot disinclined to do the crown’s bidding, especially when it comes to matters of faith. In fact, Protestant New England considers the execution of the Catholic-friendly Charles I justified and his killers righteous. So firm are they in their convictions, Puritans from Boston to New Haven and beyond agree to shelter Whalley and Goffe at great risk to themselves. By order of Parliament, anyone harboring the fugitives in the New World is also guilty of treason. A hefty reward is offered for their capture.

With a price on their heads, Whalley and Goffe spend the next dozen-plus years trying to stay a step ahead of Nayler by alternately sleeping rough in the wilderness and furtively moving under cover of night from bolt-hole to bolt-hole provided by pious hosts. Some places are more comfortable than others; all feel precarious and demoralizing. At the home of Reverend John Russell, they’re given the luxury of two rooms:

“[Russell] opened a door onto a narrow connecting passage between the two bedrooms. It ran behind the chimney. It exuded a smell of fresh paint and sawdust. Halfway along, he pulled up a couple of loose boards. He beckoned them to come and see. He shone a lamp over a ladder leading down into the darkness. ‘There’s a small chamber hidden behind the chimney on the ground floor. If anyone comes looking for you, you can conceal yourself there.’

“‘Most ingenious,’ said Ned. That is the hole where I shall crawl to die, he thought.”

Whereas Will (whose Christian zealotry tiptoes up to the edge of madness) never wavers in his conviction that killing the king was just and that God is on their side, Ned finds his own once-ironclad beliefs softening. He reveals some of those doubts in a private journal he ostensibly keeps for his daughter (and Will’s wife), Frances, left back in London with five children. These passages — which bring both Cromwell and Charles I to life — are among the book’s most interesting. Harris might have used them to better effect by introducing them sooner.

Not that the author doesn’t know what he’s doing. As in Pompeii, in his outstanding Cicero trilogy, and in Conclave — a novel that somehow made the selection of a new pope compelling even to this heathen — Harris is in no hurry here. He’s willing to let Act of Oblivion unspool slowly, trusting readers will stick with Whalley and Goffe through their protracted, prayerful exile in the future United States. That Nayler’s endless pursuit is far less breakneck than the opening image suggests is a reminder never to judge a book by its cover.