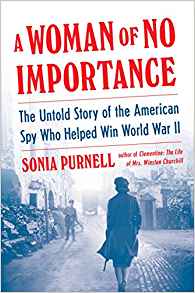 A Woman of No Importance chronicles the remarkable life of Virginia Hall, a decorated behind-the-lines operative for the Allies in Vichy France in WWII. Author Sonia Purnell has turned out a thoroughly gripping and inspiring account bristling with real-life suspense of an American’s unlikely role in the struggle against Hitler’s occupying forces.

Expert in evasion, close combat, and disguise, Hall repeatedly eludes her pursuers — Gestapo and Vichy collaborators alike — from 1940 through the Nazi retreat from France in early 1945. All along, she defies gender-role obstacles deployed by intransigent and often bumbling male opposition, much of it officers who outrank her.

But here’s the real stunner in this bold and fearless woman’s saga, a factor that might have deterred (or disqualified) a less-determined individual: Hall’s right leg is missing below the knee. Ten years before going undercover in France, she loses her leg in a hunting accident while serving as a State Department clerk in Turkey.

Baltimore-born Hall hails from a prominent banking family. After grad school in Paris, she applies for the diplomatic service and is declined. She settles for a clerical position (the standard assignment for a female applicant at the time) at the U.S. embassy in Turkey, where her accident occurs. In 1939, after another rejection for a diplomatic position, she leaves U.S. government service.

Undaunted and determined to resist the Nazi onslaught, Hall signs on as an ambulance driver for the French army, where she comes to the attention of a talent-spotter for the British Special Operations Executive (SOE), a new organization geared to sabotage and subversion.

As France totters, the SOE dispatches Hall under journalistic cover to Lyon, deep in collaborationist territory. There, she builds a network of informants, a number of them Vichy police and bureaucrats, and sets up safe exfiltration routes for SOE agents through Marseille, 200 miles to the south.

She also recruits local women as couriers and enlists sympathetic prostitutes as spies and informers. She channels millions of British-counterfeited francs into her network for bribes and agent expenses. She establishes safe houses and hidden transmitter sites for reporting to London, always mindful of the truck-borne radio-frequency detectors trolling the streets.

And she manages this wide-ranging espionage enterprise even as she leads nighttime ambushes and sabotage raids. Relatively few in Hall’s network of résistants know the extent of her infirmity, despite the irritating eight-pound prosthesis she has to wear. Befuddled Nazis, thwarted in their attempts to capture or kill this elusive, faceless antagonist, call her “the Limping Lady of Lyon.”

But that’s all they have to go on. She thrives in their midst, achieving nearly unprecedented longevity for a behind-the-lines operative.

Ultimately, her London superiors come to view her activities as too risky, and they regularly issue recall orders. Hall just as regularly ignores them. Only when the Nazi authorities get too close, in her view, does she make her escape via a treacherous winter transit of the Pyrenees.

Pretty impressive for a Charm City debutante with a wooden leg.

Back in London, relegated to a desk job and a brief “foreign correspondent” posting in Paris, Hall takes a bold step: She transfers to the American OSS, the predecessor of the CIA.

Her appearance altered by plastic surgery and a dental procedure to grind down her ruling-class smile, she sets up in the foothills of the French Alps, posing as a village crone. The Gestapo is still raiding the cafes of Lyon and bayoneting hayricks in search of the young, willowy Allied agent they’ve identified.

Under her new cover, Hall organizes an insurgency, scheduling nocturnal airdrops of armaments, supplies, and cash for her initially skeptical maquisards and the puffed-up, dismissive Gaullist regulars arriving so characteristically late to the fight.

Hall survives the war, joins the fledgling CIA, and does not speak of her exploits for another 38 years. The CIA eventually names a building at its training center after her.

Purnell deserves much credit for her meticulous research, mining Hall’s surviving correspondence, the memories of comrades-in-arms, and the declassified files of three governments for insights into Hall’s character and exploits. The author never sacrifices precise detail in the interest of furtive liaisons, midnight explosions, narrow escapes, and shocking betrayals, though there are plenty of those.

Up to now, the facts about Hall’s life have been far too little known to the public. A Woman of No Importance sets the record straight: It’s a terrific book about an astonishingly brave and accomplished American war hero.

Our Wild Calling: How Connecting with Animals Can Transform Our Lives — and Save Theirs