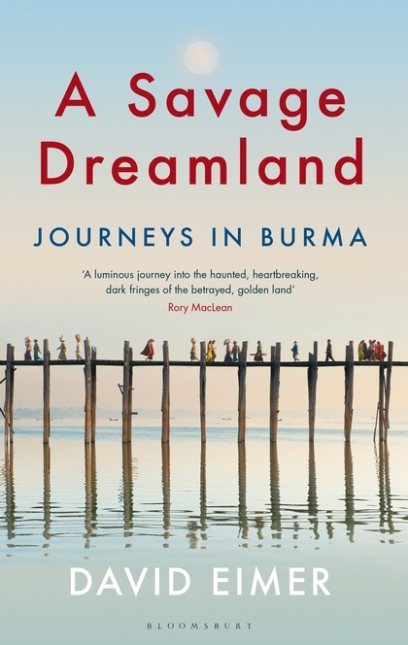 The word “savage” wouldn’t have been my preferred choice in a title about a land and its people, especially given the exploitive colonial legacy in this particular country. Having said that, the term doesn’t appear again within the pages, and beyond that, it may not have been the author’s decision in the first place.

David Eimer’s travel narrative of Burma, A Savage Dreamland, translates his experiences for a Western audience. For many years, foreigners could not enter this Asian country, which many now call Myanmar. Today, foreigners stream steadily into the nation, but the government still limits their routes and controls what they see. Eimer gets off the path to describe what most recent tourists have not seen, the less-choreographed version of Burma. He then mingles his observations with historical snapshots.

“Step back and the people in their traditional clothes, the lack of the trappings of modern life, the cloak of colonial architecture, all conspired to present the city as a sepia image and Burma as a flickering black and white newsreel of a nation.”

Having been there myself, this is an easy image to conjure, as certain parts of Burma remain untouched. But these types of comparisons represent the detachment of a colonial gaze. Yet Eimer takes care to acknowledge the destructive colonial legacy, here discussing an Anglo pirate who once pillaged Burma’s southern coast:

“[He] was a nautical version of his old boss the East India Company, which was plundering India to line the pockets of its shareholders, with every employee eager to gain a private fortune and get back to England before disease carried them off.”

Eimer takes you through the more puzzling aspects of Burmese rule, like when he reports on the central role of astrology: “Instead, the planetarium was used by Ne Win’s astrologers for their calculations. Burma’s leader could also sometimes be seen walking backwards across bridges late at night, apparently on the advice of his seer.”

Eimer traveled as far as the government and local militias allowed, to remote areas, to the seemingly people-less capital, and to border scenes, staying with locals whenever possible.

He also grapples with the current political crisis, and specifically the rise of Aung San Suu Kyi. He frames his commentary through conversations with the majority Burmese population and the various minorities he meets along his path.

Aung San Suu Kyi had once attained the West’s favor. After she supported the purge against the ethnic minority Rohingya, however, many in the West sought clarity on the dynamics of her decisions. Eimer leads a Western audience through the nuances he sees pertinent to her controversial policies.

The book’s chapters generally don’t build upon each other, so you can read in any order or skip to the topic or areas of most interest. That said, if you’re following the trail of Aung San Suu Kyi’s rise and her involvement in the Rohingya crisis, it may be helpful to read from beginning to end.

Eimer’s work is a gauge for how Europeans and North Americans might experience the country, how they might be received, and what they should know. The downside to his narrative is that it focuses almost completely on men’s issues.

Adding a broader sense of women’s experiences in the country may have given the book more depth as Aung San Suu Kyi takes such a prominent role in it. To be fair, as a foreign man, the author may not have had access to enough women to bring out that perspective.

As a companion read, I suggest the work of Thant Myint-U, a Burmese historian born in New York City, who writes from another point of view on similar topics. He wrote The River of Lost Footsteps: A Personal History of Burma, and his The Hidden History of Burma: Race, Capitalism, and the Crisis of Democracy in the 21st Century came out earlier this month.

All told, A Savage Dreamland makes a contribution to the literature on Burma, offering an outsider’s understanding of this often confusing, always fascinating country.

AA Bastian published on a new source for the Second Anglo-Burmese War in the Journal of Burma Studies, “The Other Bayonet: A New Source to Frame the Second Anglo-Burmese War.” She’s currently working on a history of a Mormon missionary, a new source, in India, Southeast Asia, and Hong Kong between 1853-1855. Follow her on Twitter at @AABastianWrites.