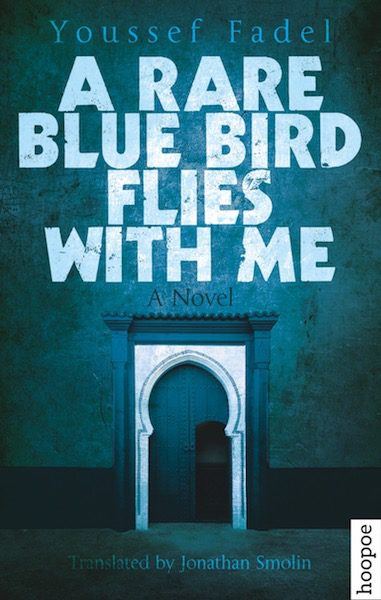 Feel through the darkness with Aziz, who is being held in detention; bits of cloth, a nail, a spattering of blood, a bone. He lies imprisoned in a kitchen awaiting his own death amidst the rot of others who have passed before him.

A Rare Blue Bird Flies With Me centers on Aziz’s first-person confrontation with imprisonment, while other characters, also in first person, take turns relaying their encounters with Aziz. This multiple-narrative approach is an Arab literary technique that takes you intimately into the mind of each character.

Birds, whether in the cell, in memory, or out in the open, symbolize Aziz’s captivity and personify his experience. This dark narrative pricks with literary light from a crack in Aziz’s cell, and in his own being, too. The metaphor is how Youssef Fadel chose to capture Morocco’s infamous “Years of Lead” in the 1970s, and specifically the failed coup against King Hassan II in 1972.

In translator Jonathan Smolin’s foreword, you’ll find vital context to bring the novel into reality. Aziz’s story evolved out of a collection of actual prison experiences in Morocco, including those of the author himself, who spent 1974-75 in the Moulay Cherif prison for his own daring voice.

Zina, Aziz’s 16-year-old bride, bookends the story. Will she find him after 20-plus years? Her search keeps the story alive when time and decay seem impossible to overcome. The delicacy of birth and renewal play into the story with her own pregnancy as well as others’ (a guard’s wife, a turtle); sadly, some of this budding new life will not survive.

The style of the writing, like the content, lends character to the narrative. Walk backward into the experience; almost every sentence is carrying you to meaning (and secrets) that the characters know, even when the reader does not. Discovering the story’s complexities feels like the nearly hopeless search for Aziz.

For example, only after two-thirds of the book do you finally find out a critical connection between Zina and Aziz that drives Zina throughout. The way in which the readers discovers the information feels accidental, but of course it isn’t an accident at all, but rather a carefully planted sleight of hand by the author.

Moving backward into the details yet forward to Aziz’s fate is a compelling contrast in the book. Short, incomplete sentences lend a frantic pace to the novel, even while the time drones on and Aziz marks off the days to keep himself sane. The counter-play of darkness and light, birth and death, dreary slowness and quick, staccato sentences keeps the story from dragging.

Because the characters alternate in first person from chapter to chapter, I didn’t fully connect to any one of them at first. The deathly Aziz never attains a total preeminence in the story, perhaps because his relationships are in the past or exist as personified animals. I didn’t know, even toward the end, if he would live through the imprisonment or, more importantly, if he’s even one to hope for.

As the story returns to the different characters, each one slowly takes shape. Their interconnectedness reveals itself just as Aziz’s fingers slowly reveal his kitchen surroundings. Animals, who are Aziz’s only companions, take on the legitimacy of humans in the narrative, including, for one dog, some dedicated chapters.

Aziz seems to be a symbol for Morocco, and the characters around him who hope for his survival, together, are a similar hope for that country. A general, for example, tells Zina in her quest to find Aziz, “Aziz is a friend of us all. What happened to you happened to everyone.”

Dark as the novel may seem, there is enough light to liberate the reader to press on. “And what I discover is that the piece of curved tin is reflecting sunlight. Then that bird’s color wasn’t black. The day acquires a color and a presence. The light reflects off the bottom of the piece of shining metal and a sun appears at its base. A captivating, transparent light, between violet and blue, fills the place.”

So the book will end, redeemed and well worth the read.

AA Bastian is an independent writer in Silver Spring, Maryland. Her master’s degree is in International Law and World Order from the University of Reading in England. She holds a minor in Arabic and has lived briefly in Egypt and Palestine. She published an article about Egyptian women’s usage of social media during the Arab Spring, “Double Facebook Profile: Egyptian Women Online,” at the Eurasia Review. She received an Honorable Mention in the Writer’s Digest 75th Annual Writing Competition in the Memoirs/Personal Essay category for “Japanese Carp,” a critical look at her childhood as a military dependent in Okinawa. She is now working on a book project about a letter that impacted Thai-Western relations in the 1850s.

This Holocaust story will have readers questioning their realities and counting their blessings.