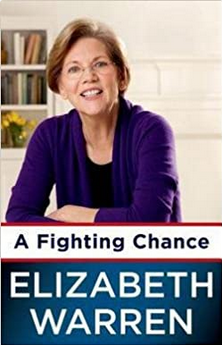 Motive is an elusive key to character. It can tell us a lot about ourselves if we dig deep and are honest about why we are doing something. Take political autobiographies. Please.

The vast majority of the stories statesmen (and women) elect to tell in these super-size tomes seem designed to humanize the political figure while subtly serving as just another piece of campaign literature.

In the excellent HBO mini-series “VEEP,” Julia Louis-Dreyfus as vice president is setting up a run for the Big Enchilada. Sitting in a room with a chief of staff while on her book tour, she stops. “Look at us. You pretending to be me signing a book I didn’t even write.” His G-rated reply, “Politics in a nutshell.”

In this, her fifth book, Massachusetts Senator Elizabeth Warren has emerged as something of a liberal hero. She also almost certainly wrote it, too. What were her other goals?

I don’t have access to her secret diary, if she has one, and I don’t know any of her close friends. In other words, I have nothing to base her motive on except what she’s written in this book. I’ll say this, she does a good job of sounding earnest. Not to say she isn’t, just an observation that her tone is sincere, intelligent, and affable.

She delivers bird’s-eye views of President Obama, then-Treasury Secretary Timothy Geithner, Barney Frank, Ted Kennedy and others. I fault her a little for subjecting us to the typical hand- wringing about whether she should run for Senate. She asks her friends and family, the vast majority of whom say no and say it vehemently…then she decides to run. It begs the question, why ask? She’s certainly not the first to take us on this ride of personal anguish, and she’s less maudlin about it than many (e.g., “I wasn’t going to run until a frightened little girl in New Hampshire said her daddy had given up hope…”). She also tosses in some family dog stories, too, but never as manipulatively as Nixon did with Checkers.

Despite Warren’s sketches of her background growing up in Oklahoma, marriage and divorce, raising children, remarriage, and finding work as a professor in different states, in many ways this book is more about big ideas: Reforming Banks, Helping Middle-Class People Avoid Bankruptcy, Government Can Be Part of the Solution.

She firmly believes Capitol Hill and the White House can and should play an important role in the lives of Americans. Ronald Reagan and others disagree, of course. The spine of the narrative is her battle on Capitol Hill against lawmakers determined to shrink government’s size and influence. She makes a strong case for why government should be a major player. Full disclosure number one: I read some of this book while waiting to register my car at the Maryland DMV. My experience with state government that day was friendly and quite efficient. They even had good stuff in the well-stocked vending machines.

Sen. Warren does reasonably well within the typically cautious world of political autobiography. She can be self-effacing at times, but it’s mostly minor stuff, e.g. her son says that the students in her class only laugh at her mediocre jokes “because they have to.” She wears the wrong kind of clothes to an Oval Office meeting and gets sweaty. She’s nervous about public speaking and campaigning or promoting an earlier book on Dr. Phil’s TV show. It’s interesting. It’s fine. Is it deep? Don’t read a political autobiography of an active candidate for bare-boned candor.

Not all that surprisingly, it’s on the personal side where the book sometimes wavers. Here’s Sen. Warren summing up the end of her first marriage: “While I carefully put one foot in front of the other, determined to keep my life more or less the same, Jim went in a different direction. He quit smoking, lost thirty pounds, and took dancing lessons. Eventually, he met a very nice woman and remarried. We didn’t see him often.”

After reading that last sentence, I thought Jim might have liked to say a few words in his defense. Or, given that this is Sen. Warren’s book and not Jim’s, it might have been fair to him either to cut that last line or give it a little more context. Maybe Jim was a jerk who dropped his kids for a new life. Maybe there were other factors. Sen. Warren raises the question, then drops it. Full disclosure number two: I’m a divorced dad with kids.

Still, A Fighting Chance focuses more on advancing ideas rather than peeling the onion too deeply on individual human beings.

We live in a red and blue United States. Sen. Warren, earnest as she is, won’t likely convert too many red folks in this readable and often interesting book. Maybe that wasn’t her motive in the first place. I don’t really know.

Michael Causey is a past president of Washington Independent Writers. It’s the only election he has ever won. He ran unopposed.