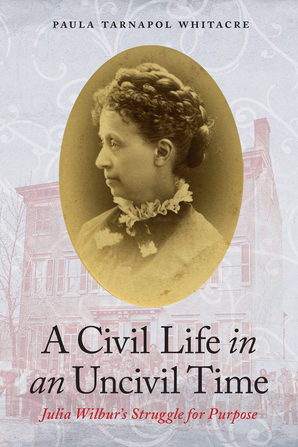 In these uncivil times, many readers may turn to history for elucidation on a growing list of social concerns. A plethora of new books and erudite contemporary authors provide perspective on racial injustice that continues into the 21st century, no matter how we may wish to think otherwise.

Books by Michelle Alexander, Bryan Stephenson, and Ta-Nehisi Coates are important in making linkages from past to present. So too, are titles that look back to the 1800s to help us understand how we got here — how much has changed, and how little.

Julia Wilbur is not a well-known abolitionist. That lack of familiarity is one thing that makes Paula Tarnapol Whitacre’s A Civil Life in an Uncivil Time so interesting. Wilbur was one of many volunteer advocates who dedicated much of her life to a cause in ways that unsung volunteers do today.

As Whitacre notes, the term “volunteer” was not utilized at the time of Wilbur’s work. And, in fact, she did receive very minimal expenses from an anti-slavery organization that enabled her and others to travel from the Northeast to support newly freed slaves in Union-controlled Alexandria, Virginia.

Wilbur spent years organizing and distributing supplies, clothing, and food to thousands of former slaves, who were officially and outrageously referred to as “contraband.” She also advocated for better conditions and resources.

Like many volunteers today, she not only provided direct service, but also pleaded with the government for more and better services and equitable treatment for the newly freed people. Leaders and volunteers of modern nonprofits will recognize the challenges that she faced: inadequate funds, misaligned resources, and turf issues, as well as the intangible rewards of service, dedication, and camaraderie.

Whitacre carefully depicts Wilbur’s work, as well as her personal and family life. The book provides interesting details about what life was like for an educated, middle-class single woman with a large extended family. However, some of the details become tedious. Births, marriages, and divorces of nieces and nephews bog down the flow of the story. Often, I felt unmoored and wished for more contextualization or narrative instead of a string of descriptive passages and quotations.

As Wilbur’s story unfolds, the juxtaposition of war and sightseeing in and around Washington, DC, is startling but also elucidating, informing the reader what it’s like to have a semblance of normalcy while battles rage nearby. She liked to travel and went home to New York annually for an extended time, despite the physical challenges of getting there and back. Just as Washington-area residents do today, when family visited, she took them to see the sites, including the Smithsonian and the White House — no tickets or security required.

Wilbur’s sometimes-awkward relationships with African-American co-workers blossomed into genuine friendships that enhanced her understanding of and outrage about ongoing prejudice. She describes, for example, the painful experience of her black friend being prohibited from traveling in the same railcar, noting to the conductor that another white passenger was allowed to bring along a black servant.

In particular, her friendship with the more well-known black abolitionist Harriet Jacobs began with a rocky start of real or perceived competitiveness on Wilbur’s part, but emerged beyond mere respect to a deep, lifelong bond.

The implicit racism that pervaded the nation, not just the South, and was exhibited even by abolitionists reminds the reader of how deeply ingrained are societal norms. Wilbur herself, earlier in her career, put Frederick Douglass and other black leaders on a pedestal while sometimes patronizing poor or illiterate black people. “Surely she knew what was best for them, she wanted to believe.”

Through her experiences, Wilbur “realized that the end of slavery did not solve the problems it had caused. Racism and inequality persisted. Illness and death reached horrific levels, exacerbated by malnutrition, lack of health care, and other causes.”

We see just how easy it was for post-Civil War society to slide into segregation and to ignore how long it takes and how much support is needed for refugees to adjust to new circumstances. We see the roots of victim-blaming.

Readers who will appreciate this book include those interested in the Civil War, abolitionism, and early feminism. Residents of both Rochester, New York, and the DC area will appreciate the detailed descriptions and historical photographs of their communities. Finally, we can all be inspired by the significant contributions made by a woman who was brave, relentless, and — comfortingly — ordinary.

Robin Talbert grew up in a cotton-mill town in the foothills of western North Carolina. Her poems and essays have appeared in the Charlotte Observer, the Healing Muse, the Anthology of Appalachian Writers, and Pine Mountain Sand and Gravel, among others. An attorney, she was formerly the President of the AARP Foundation. She lives with her husband, Bruce Goldstein, in Maryland and West Virginia.