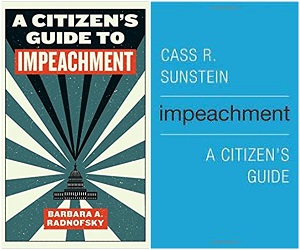 Harvard law professor Cass Sunstein was coming of age as President Richard M. Nixon was facing likely impeachment for the Watergate cover-up and other abuses in 1974. Sunstein recalls now that he did not fully understand impeachment at the time. In law school a few years later, Sunstein remembers that no class devoted even a single minute to the impeachment process or the origins and drafting of the Impeachment Clause as part of the original Constitution.

Sunstein has now written one of two pocket-sized guides to impeachment aimed at filling the gap in public understanding of what he and the second author, Barbara A. Radnofsky, both view as an essential constitutional safeguard of American liberty.

Both authors are present-day Democrats who rushed their books into publication in the context of the Trump presidency. Trump's name appears in neither of the books, but the issues surrounding his actions as candidate and president have antecedents and parallels in the histories related in each.

The Impeachment Clause provides that the president, vice president, and all other "civil officers of the United States" are subject to impeachment and removal upon conviction for "treason, bribery, or other high crimes and misdemeanors."

The Framers placed the clause in the executive-branch Article II because, as Sunstein puts it, they viewed impeachment as "a republican mechanism for controlling officials who abused their authority," specifically including the powerful "chief magistrate."

Both authors stress, as needed in the present context, that the Framers adopted the phrase "high crimes and misdemeanors" from English usage to refer not to ordinary public crimes but to offenses by public officials against the state itself. The Framers rejected as too narrow an early version that listed only treason and bribery and then scrapped as too vague a revision with "maladministration" as grounds for impeachment.

The Framers also had initial disagreements on the impeachment process before deciding to specify in the legislative-branch Article I that the House would have the "sole power of impeachment" and the Senate "the sole power to try all impeachments," not some specially established panel of judges. Congress' role made good sense given the Framers' focus specifically on providing for impeachment of the president — a decision made at the convention on an 8-2 vote, as Sunstein relates.

Presidential impeachments have naturally gotten the greatest attention, but the only officers removed through impeachment have been eight federal judges, four of them within the last 30 years, as Radnofsky lists in a detailed historical chronicle.

The only member of Congress to be impeached, Tennessee's 18th-century senator William Blount, was expelled by the Senate without being brought to trial. The only Cabinet member to be impeached, the Reconstruction-era secretary of war William Belknap, was acquitted after already having resigned his post.

Two presidents were impeached but acquitted in the Senate: Andrew Johnson in 1868, Bill Clinton in 1998. Nixon resigned in August 1974, facing all-but-certain impeachment and conviction after the Democratic-majority House Judiciary Committee had approved three articles of impeachment with a few Republicans voting for each.

Sunstein, a teenaged Republican and now a centrist Democratic veteran of the Obama Administration, believes Johnson and Clinton were properly acquitted but also thinks it important for impeachment to hang as "a sword" over the president. He warns that it would be "a national nightmare" if the impeachment process were used too often, but he also worries about failing to use it "in circumstances in which it really is justified."

Radnofsky, a Houston lawyer and unsuccessful Democratic candidate for the Senate, shows through her detailed listing the variety of charges that the House and Senate have deemed to be impeachable offenses, ranging from bribery or other financial corruption to false statements on tax returns or financial disclosure forms. Two judges were impeached for personal misconduct: one for drunkenness, another for sexual assaults; both resigned without the need for a trial.

In professorial style, Sunstein hypothesizes 21 scenarios that include some "easy" cases for impeachment, some "harder" cases, and some "easy" non-impeachable cases: mere policy disagreements that he says ought to not be the stuff of impeachment.

Among the easy cases for impeachment, Sunstein lists a president "elected as a result of a secret plan with a nation that is unfriendly with the United States." No names mentioned. For a harder case, Sunstein posits a president who "repeatedly deceives the American people" during wartime. Again, no name mentioned. Tax evasion before or while president: non-impeachable, Sunstein concludes.

Sunstein remembers the Nixon impeachment through a somewhat romanticized lens. "We the People were rising up against a president who had apparently done some awful things," he writes. That memory passes over the work that Judge Sirica and the Senate Watergate Committee did in uncovering Nixon's misconduct.

For present purposes, however, Sunstein considers an informed citizenry to have an important role in "keeping the Republic," to borrow Benjamin Franklin's phrasing. The Impeachment Clause teaches, Sunstein says, that Americans are "citizens, not subjects."

Radnofsky agrees that the clause remains "as necessary, exciting, and important" as it was to the Framers. "What should citizens do?" she asks in closing. "Tell your friends to vote, and tell your Congressperson how you feel. Learn the law of impeachment."