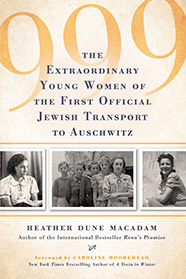 In recent years, an astonishing number of new books have provided insights about the utter darkness of the Holocaust, as well as the suffering and courage of its victims and survivors. Heather Dune Macadam’s 999: The Extraordinary Young Women of the First Official Jewish Transport to Auschwitz deserves a prominent place in this flowering of books that reshape our understanding through revelations and heartbreaking vignettes.

The author’s narrative, set in Slovakia and other crushed European countries, focuses on a program designed to destroy Jewish womanhood. The action begins in late March of 1942, when a roundup of Jewish females, announced in advance, gets underway. These women — mostly teenagers and young adults — were summoned to report to authorities and board an overcrowded train in the town of Poprad.

The screws had already begun tightening when the Slovak government implemented the Jewish Codex, a series of laws and regulations designed to cripple the country’s Jewish population. Their former rights quickly vanished.

Though pre-roundup escape plans were dangled before some, most of these tempting arrangements were hoaxes that did not pan out. Families were persuaded that the women would participate in a kind of government service for the Reich. They would work in factories and have an opportunity to be true patriots!

Many of these female “draftees” came from the towns of Humenné and Prešov, both of which had sizable Jewish populations. And just in case they behaved irresponsibly while being shipped off, they would be policed by the fascist Hlinka Guard, who would also beat up any interfering brothers and fathers, if required.

The women’s lives at Auschwitz do not turn out as expected. Conditions are terrible, and exhaustion is normal given that most of those interned are slaves. Their clothing disintegrates; with no means to replace garments, bodies are left fully exposed. There are few medical professionals on hand.

Indeed, as the women soon discover, there is no plan for their lives except to exploit them, dehumanize them, and eventually send them as smoke up a gas-chamber chimney.

Why did this female-specific policy come about? One can speculate that gloating over the pain of a scapegoat population had become a disease in Germany and across the landscape over which the Nazis had taken control. But why target young women? Could it have been an attempt to guarantee the end of the Jews’ future by destroying a generation of potential mothers?

Women who’d managed to gain special privileges in the concentration camp found ways to share their good fortune, temporary as it might have been, with others. Macadam’s vivid descriptions of the Auschwitz-Birkenau complex place readers in the inmates’ midst as the women endure their imprisonment before the war’s end.

What’s most remarkable about this book, aside from the author’s meticulous archival and other research (as well as the photos and generous chapter notes), is her compassionate dedication to her subjects.

Though the majority of the roughly 1,000 women from the first Auschwitz transport eventually died at the Nazis’ hands, Macadam managed to locate a significant number of survivors. In her stirring book, she allows them to tell not only their own stories, but also those of their friends, relatives, and co-inmates, whose ordeals would’ve otherwise been lost along with their lives.