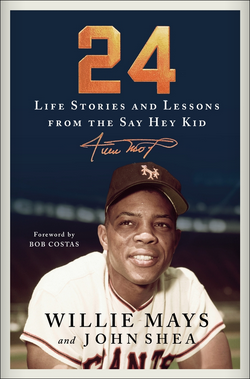 In Major League Baseball, there’s the category called “the Five Tools of Performance.” They are speed, throwing, fielding, hitting for average, and hitting for power. In the delightfully entertaining 24: Life Stories and Lessons from the Say Hey Kid, it’s made abundantly clear that Willie Mays embodied each of them, making him one of the game’s greatest all-around players.

Throughout 24, Mays, long ago nicknamed “the Say Hey Kid,” shares his wit and wisdom about the game of life both on and off the diamond. In giving so much to the sport he loved, Mays — recipient of the Presidential Medal of Freedom — also gave to the nation. In 22 seasons with the New York/San Francisco Giants and the New York Mets, the centerfielder hammered 660 home runs, amassed 3,283 hits, stole 338 extra bags, collected 12 Gold Glove awards, and played in 24 All-Star games. In 1979, he was inducted into the Baseball Hall of Fame.

“There are some athletes,” argues veteran broadcaster Bob Costas in the book’s foreword, “who go beyond talent, beyond craft, and they turn their game into an art form. Although the statistics attest to their greatness, the real abiding thought is just the images of watching them play.”

Mays, now 89, is best remembered for “the catch” — perhaps the most recognized defensive play in all of baseball — in Game One of the 1954 World Series between the New York Giants and the Cleveland Indians. During the iconic play, Mays robbed Cleveland slugger Vic Wertz of an assured triple by turning his back on a fly ball and catching it on the run. Given its lore in the pantheon of baseball feats, authors Mays and John Shea devote an entire chapter to that singular moment.

Prior to joining the Bigs, Mays played several years for the Birmingham Black Barons. But after Jackie Robinson broke the color barrier in 1947, major-league scouts began to take notice of other Black players. Mays was lured from the Negro League — for $250 per month, plus a $4,000 signing bonus — in 1950, an occurrence that Shea argues was baseball’s “steal of the century.”

Giants’ fans were drawn to Mays from the moment he arrived in the Big Apple thanks to his gregarious nature and stellar play. He was never a show-boater, but he had a certain flair and an understanding of crowd appeal. To wit: He always wore a cap one size too small so that it would fly off backward when he slid into a base. Adoring spectators loved it.

The chapters in 24 are divided between Mays’ words, which are in bold and deal with the particular topic at hand, and Shea’s storytelling. Each is also framed by an epigram, such as this one that explores the racism Mays and other Black pioneers of the modern game faced: “Make a difference by teaching kids how to respect people of all backgrounds and races. Set an example so they can set an example.” As President Bill Clinton once remarked, “Willie Mays made it absurd to be a racist.”

There’s a wistful quality at play in 24, too. While Mays loved the game and gave it 100 percent, he was largely untouched by free agency, a practice that dramatically altered the dynamics of the sport. Baseball simply meant more back then — when Mays was at his peak — than it does today.

Still, 24 serves as a testament to the Golden Age of Baseball and one of its singular champions. If you love the game, you’ll love this book.