In a near-future dystopia, the refugees are us. 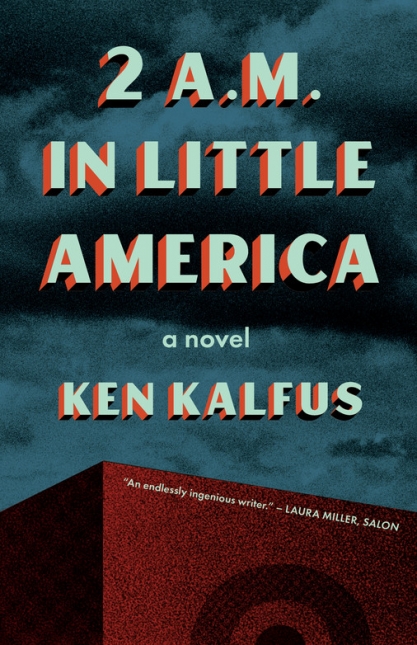 The other day while driving, I pulled up behind a car that was covered in bumper stickers. I nervously scanned the messages. Years ago, such a vehicle would’ve belonged to a ski bum or a punk-rock aficionado. Today, it’s more likely to be someone with strong political beliefs. So, I found myself squinting to read the fine print, trying to determine which side the driver in front of me was on.

In Ken Kalfus’ 2 A.M. in Little America, a near-future United States has metastasized into a bloody second civil war where everyone has been forced to choose a side. Kalfus paints a grim picture of where the U.S. is headed that tracks with the fever dreams being spun nightly by our real-world political commentators on both sides of the aisle. What is interesting about this book, however, is that, unlike similar cautionary novels such as The Handmaid’s Tale and The Road, the narrative never sets foot within the borders of the dystopia itself.

Instead, we view the catastrophic collapse from a distance through the eyes of Ron Patterson, an American refugee struggling to survive in one of the shrinking number of unnamed countries willing to offer him asylum. Eventually, Ron ends up in the Little America of the book’s title, an enclave populated by fellow expats.

Here, out of context and without obvious bumper stickers to guide them, everyone is still choosing sides, signaling their allegiances through the dogs they own, the cars they drive, the box stores they once patronized. Ron, somewhat implausibly, is stubbornly oblivious to the signs around him. He knows he was on a side, but he doesn’t dwell on which one it was or what they believed in. Instead, the source of the conflict boils down to a disagreement over truth:

“We tried to see it their way and the effort left us on the brink of derangement. Objective reality slipped from our grasp, leaving us unable to trust our senses or our ability to reason. They were lying. They thought we were lying. We couldn’t prove we weren’t. Which didn’t prove that at least one of us wasn’t lying.”

Kalfus has taken on two huge themes — the destructive nature of political tribalism and the alienation of the refugee — in a very slim novel. Unfortunately, while the book provides some incisive commentary on both topics, neither is fully expounded upon. In particular, the details of the civil war — presented through found documents rather than personal accounts, and feeling cribbed from dystopian predecessors like Atwood and McCarthy — as horrific as they are, lack immediacy. The war and its atrocities are already treated as history by the refugees, which puts distance between them and the reader.

The author is more successful in bringing a new perspective on the plight of refugees to an American audience. By making a U.S. citizen the nationless wanderer, the novel is aimed squarely at Americans who can’t imagine ever suffering such displacement. Ron endures the vertigo of living as the foreign supplicant, never quite welcome or trusted. He is detached from his own identity, as he tries to explain:

“This has been such a confusing time. Disorienting. Right? Every migrant is disoriented, out of place, unsure about the basic elements of his new reality.”

There is poignancy in Ron’s plight as he struggles to see the world around him, even to the point of not recognizing faces that should be familiar. His story has more power early in the book, as he pushes through his own fog to create a life, than it does later on, when he’s dragged into the proxy sectarianism of Little America.

In the end, the social commentary in this novel is particularly sharp, and there is much to contemplate, though its broader context is sometimes a distraction rather than a benefit. The dissolution of the United States and the end of American exceptionalism feels all too credible in Kalfus’ hands. But much like Ron, the reader may come away a bit disoriented by the story itself.

Michael Landweber is the author of four novels: The Damage Done, The In Between, Thursday, 1:17 p.m., and We.