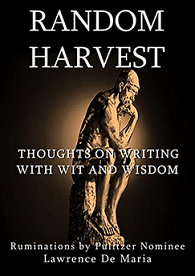 I’ve been writing this column since saber-toothed tigers roamed the earth during the Pleistocene Epoch. Or at least it seems that long.

So, it occurred to me that some of the things I wrote might have made sense.

I’m not being pretentious. According to the infinite-monkey theory, a monkey hitting keys at random on a keyboard for an infinite amount of time will eventually type the complete works of Shakespeare.

(My only connection to monkeys is Darwin, although I do buy a lot of bananas. None of them, by the way, are green since I don’t have an infinite amount of time. As for Shakespeare, while I am a direct descendant…only kidding!)

In any event, I believe some of my thoughts on writing have legs. So, I have self-published a book, Random Harvest: Thoughts on Writing with Wit and Wisdom. The “Random Harvest” part of the title has absolutely nothing to do with the 1940s tearjerker movie starring Ronald Coleman and Greer Garson. I doubt if anyone knows of the film or its stars (except me, a Turner Classic Movies devotee). If I wanted to poach readers, title-wise, I’d have named the book Fast and Furious 12 or The Avengers Meet James Bond.

Some of the following advice will be familiar to my blog readers. That’s not surprising because I cribbed from my columns for the book. I don’t think one can plagiarize oneself. At least, I hope not. Maybe I can sue myself. At least I’d have a 50 percent chance of winning.

By the way, if you read my columns, there is no reason to buy the book. Amazon doesn’t need your 99 cents (of which I get a whopping 35 cents). My Florida Lotto tickets, aka my retirement plan, cost three bucks each!

Among the gems or — depending upon your taste — lumps of coal in my book are some quotes that I love:

“If you want to be a writer, you must do two things above all others: read a lot and write a lot.”

I firmly believe that you can’t be a good writer unless you read a lot. It doesn’t have to be in your genre, though. I read fiction, nonfiction, memoirs, cookbooks, you name it. I go to the library. I have three Kindles. I have e-reading apps on my laptops, smartphones, and home computers.

(I once got reamed out by a Marine NCO for reading too much; I put that book down, pronto!)

“When in doubt, have two guys come through the door with guns.”

The Chandler quote applies mainly to thrillers. It probably wouldn’t work in a cookbook. But it surely might work in Stephen King’s latest novel, Billy Summers, which is about a hit man who wants to be an author!

“Good writers are born, not made.”

– Me and a zillion other writers

Obviously, writers don’t come out of the womb holding a pen or a computer. If they did, there would be a lot of sore (and I don’t only mean angry) mothers out there. But if you can’t string words together coherently (or at least interestingly; some of our greatest writers are hardly coherent, eschewing such niceties as complete sentences and capital letters), then there is little hope for you.

But if you are a good writer — and you know it and want to write a book — then go for it!

One HUGE caveat: You can be a good writer but not a good novelist. And there is no shame in that. Some of my favorite books are nonfiction. Think of Laura Hillenbrand’s Seabiscuit. And the books of Yuval Noah Harari, William Manchester, Erik Larson, Walter Isaacson, Winston Churchill, and dozens of other nonfiction writers, male and female, are tours de force.

Lawrence De Maria has written more than 25 thrillers and mysteries available in print or digitally on Amazon or at www.lawrencedemaria.com. His latest, Nightingale, is just out. For the record, he has not really seen a saber-toothed tiger. In fact, in his neighborhood, even housecats are rare, probably because of all the alligators.