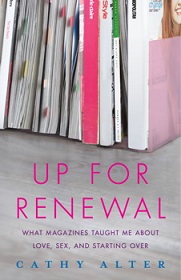 I was just about to enjoy my first glass of wine when a woman strode up to me with great purpose, holding something high in the air like the Statue of Liberty's torch.

"Is this really you?" she asked, staring hard. It was then that I noticed her torch was really a book. My book. I was in Alexandria, Virginia, and this was my first book club event since the launch of my memoir, Up for Renewal.

Figuring she was questioning the authenticity of my author photo (which is, ahem, a few years out of date) I assured her that, yes, it really was me.

"I know the photo is you," she responded with impatience. "You look much more tired in person, though."

There were 12 other women in the room and, suddenly, all eyes were on me.

"What I want to know is," she continued, "is this really you in the book?"

After discussing one of the men, a no-good Peter Pan with a hoarding problem, one of our members turned to Leslie and asked, "How much of your book is true?"

Ah, yes. The age-old question of truth in memoir, one probably dating back 1,600 years, ever since Augustine of Hippo wrote his Confessions. It's a question that plagues us memoirists and personal essayists, called out from the audience at Politics and Prose and by members of wine-soaked book clubs.

And I get it. A Million Little Pieces author James Frey opened the floodgates, begging for Oprah's forgiveness after he exaggerated the details of his arrest for hitting a cop with his car while high on crack. Rather than doing, as he wrote, 87 days in jail, Frey spent only a few hours before his release.

When I write nonfiction, whether my own essays or the stories I report as a journalist, I am making a contract with my reader that what they are about to read is true. I want people to know that this actually happened; this is what that person actually said; this is what that woman actually wore; and this is what it really means to drop your guard and show your real self, whether to yourself or to a wider audience.

Creative nonfiction is not about being "creative" with the truth. Yet, rarely do our young selves run around with steno pads, copying down dialogue to be used in future stories. My students ask me all the time about recreating conversations.

It's tricky, I tell them. Most readers will gather that some of the dialogue is representational of what actually look place. There are disclaimers that might go at the beginning of the book. Or language like, "I remember my mother saying."

A little conjecture is fine, I tell them, as long as you don't violate readers’ trust.

You believe me, right?

[Editor's note: Have topics you'd like to see covered in "Alter States"? Cathy would love to hear them! Contact her at cathy@cathyalter.com.]

Cathy Alter is a member of the Independent’s board of directors.

I Know this Mooch Is True

So, no, you may not pick my brain!