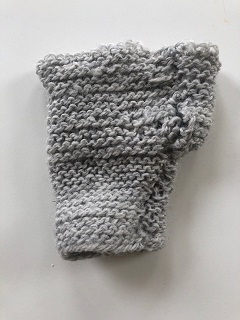 The last time I had a pair of knitting needles in my hand, they were being taken away from me. I’d asked my friend Grey if he’d teach me how to knit. Everyone was knitting their own version of the pink pussy hat, and I wanted to join in. When I learned that Grey could churn out hats and scarves by the dozen, I asked for a lesson.

Up until that point, I knew Grey as a gifted songwriter and musician. I also knew he was a life coach and the ride-or-die for so many in his friend circle. And he was patient. Oh, so patient. Until I got my hands (and needles) on him. He lasted about 10 minutes before he took my needles away and, the next day, left a pink beret, complete with cat ears, at my front door.

Wanting to show my son that his mama is not a quitter, I signed up for Beginner Knitting at Glen Echo Park in Montgomery County. In just two classes, the course description promised, I’d walk away with my own pair of fingerless mittens.

I arrived to find two other brave souls in the room: Both were nervous wrecks, worried they’d be terrible learners, which would, in turn, make them terrible knitters. Their prophecies proved correct. Moaning and groaning and threatening to quit the class, neither could get the hang of it.

But I just kept knitting, picking up the muscle movements quickly in a way I hadn’t with Grey. My rows of stitches were messy, full of weird holes and loops, but as a former perfectionist, I decided to just give myself a pass on this one. The more I kept at it, I figured, the better and more confident I’d become.

And that’s when I discovered that writing is a lot like knitting. The only way to get better is to keep doing it.

It’s an apt metaphor, but I figured there must be more bon mots out there, so I reached out to writer friends and asked them to supply me with their own metaphors. Perhaps one will resonate with you, dear reader.

“Well, I grew up in Iowa, so that’s why this metaphor is the one I use, but a lot of writing, especially novel writing or finishing a collection of stories, is like plowing a field...just keeping your head down and moving slowly up one furrow and then back down the next, trying not to despair at (or notice) the vastness of the field remaining. I recognize that in this metaphor, I seem to be more like a horse pulling an old-fashioned plow, which is not the way fields are plowed anymore — which sort of makes the metaphor even more apt in my mind!”

– Leslie Pietrzyk, author of Admit this to No One

“Writing is a lot like life. Except when it isn’t.”

“I always think it’s like yoga: a practice. You must keep coming back to it, and sometimes you’re completely off balance. Other times, you’re focused and doing handstands in the middle of the room.”

“There’s an old joke about twins, one was an optimist, and one was a pessimist. For their birthday, their parents gave the pessimist a roomful of gifts, and they gave the optimist a box of manure. The pessimist looked at the roomful of gifts and said, ‘I know there’s nothing good here, there’s nothing I want, and it will all break, anyway!’ The optimist opened the box of manure and started excitedly digging through it with his hands. He said, ‘You can’t fool me — where there’s manure, there has to be a pony!’ As a writer, I’m an optimist: When I’m in the draft stage, I write a whole lot of manure, and then I dig through it to find the pony.”

– Paula Whyman, author of the forthcoming Mad Land: Rediscovering the Wild, One Field at a Time

Why I talk to people is why I write.