Why not sup in Sleepy Hollow this spooky season? 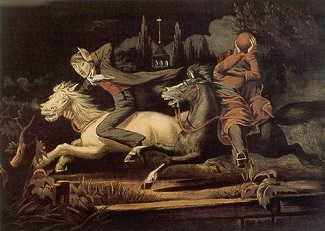 This All Hallows’ Eve season, I read The Legend of Sleepy Hollow for the first time. If you decide to do so as well, whether a maiden voyage or the 10th pass at this most roasted of Halloween chestnuts, your night table may turn into a groaning board of autumn delicacies.

I try not to eat in bed (perhaps the occasional Pop-Tart) but have long known the outline of Ichabod Crane’s fate from movies (Johnny Depp so much better on screen than on stage with a guitar), cartoons, and various abridged versions.

In 2016, while struggling through Menocal’s The Ornament of the World: How Muslims, Jews, and Christians Created a Culture of Tolerance in Medieval Spain in lower Iberia, I ran my fingers across the door to Washington Irving’s room at the Alhambra. It was there that he wrote his sketches of Spain — Tales of the Alhambra, published in 1832 — some dozen years after Sleepy Hollow appeared.

The food of España, however, is not the harvest of New York’s long-ago Tarrytown, celebrated in this goblin adventure pivoting on competition for the hand of a wealthy farmer’s teenage daughter.

On his way to the landowner’s harvest ball, astride an aged plow horse named Gunpowder, Crane (“When I hear the name, I can feel it in my spine,” says a friend) itemizes the great grocery basket that was the Empire State in the early 19th century. Wrote Irving (1783-1859):

“Farther on he beheld great fields of Indian corn, with its golden ears peeping from their leafy coverts, and holding out the promise of cakes and hasty-pudding; and the yellow pumpkins lying beneath them, turning up their fair round bellies to the sun, and giving ample prospects of the most luxurious of pies; and anon he passed the fragrant buckwheat fields breathing the odor of the beehive, and as he beheld them, soft anticipations stole over his mind of dainty slapjacks, well buttered, and garnished with honey or treacle, by the delicate little dimpled hand of Katrina Van Tassel.”

Upon arrival, the schoolmaster/gossip runs down the menu: Heaped platters of “sweet cakes and shortcakes, ginger cakes and honey cakes; apple pies and peach pies and pumpkin pies; besides slices of ham and smoked beef…dishes of preserved plums, and peaches, and pears, and quinces; broiled shad and roasted chickens; altogether with bowls of milk and cream…”

It’s as though he would rather eat that fair and dimpled hand — and all Katrina will inherit — than put a ring on it. The end of the story, however — a tall tale or true nocturnal fright? — is not to Ichabod’s taste. Not by a country mile.

Rafael Alvarez is a Baltimore-based author and former staff writer for the HBO drama “The Wire.” His new book is Don’t Count Me Out: A Baltimore Dope Fiend’s Miraculous Recovery, released this month by Cornell University Press. Alvarez can be reached via orlo.leini@gmail.com.