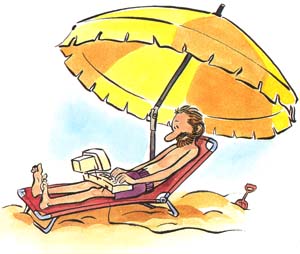 “A writer never has a vacation. For a writer, life consists of either writing or thinking about writing.”

I have this quote, from Eugène Ionesco, prominently displayed on my website. It’s also taped to my desk at home, where it shares space with several hundred other notes and jottings I consider absolutely crucial, such as lists of groceries I was supposed to buy but didn’t. (Which explains why dinner tonight will probably be leftover pizza.)

Ionesco was an avant-garde Romanian playwright, and must have been a bit of a strange bird. In Romania, the official language is, not surprisingly, Romanian. According to Wikipedia, the country’s other spoken languages include Hungarian, Bulgarian, Serbo-Croatian, Russian, Slovak, Romani, Ukrainian, and German.

Ionesco wrote in French, perhaps because the French came up with the phrase “avant-garde.”

In any event, I think he is spot-on with the quote in whatever language he wrote it. I know I’ve touched on this before in this space, but I cannot remember a day when I didn’t think that something I did, heard, saw, read, or imagined wasn’t grist for my writing mill.

In fact, my last thriller was influenced by a trip I took to Ireland in 2014, and the mystery I’m currently working on is based on Bald Head Island, from which I recently returned.

Bald Head is a tiny island just off the coast of North Carolina. (Contrary to snarky comments from my sons, the island was not named after me; they ignore the obvious genetic possibility that their own domes are doomed, too.)

The island is only accessible by ferry, doesn’t have cars (just modified golf carts), has a history of shipwrecks dating to the Spanish Main, is a refuge for people who want to be left alone, and has only a rudimentary police presence.

I was only there two days, and a plot using all those facts percolated in my head (aided, no doubt, by the local rum punches). I started the book on Bald Head, and I’m up to chapter three, having already murdered and dismembered someone.

A writer is always on.

Even the drive to Bald Head (flying is not an option; the nearest airport has yet to be built) made its way into the new book. How could it not? The journey sent my normally avuncular GPS system into a hissy fit. That part of North Carolina gives new meaning to the word “backwoods.”

For example, Exit 14, on whatever road on which I was lost, does not exist. I know this for a fact. I passed the spot where the exit should have been several times going in opposite directions while listening to the GPS frantically telling me to “make a legal U-turn.” I made so many U-turns I almost had a head-on collision with myself. I finally shut it off and found a gas station.

The point is: I actually knew when all this was happening that it would someday work its way into a novel. And it will.

Who needs a vacation, anyway?

Lawrence De Maria, a former Pulitzer-nominated New York Times journalist, has published 14 e-books on Amazon.com. His latest thriller, FACETS, featuring Manhattan private eye Jake Scarne, is just out. He somehow managed to find his way home and is now working on his next book.

Which books survived the Mass Culling of 2018?