Not yet, at least… 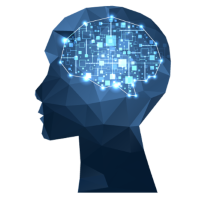 When I was younger, I wrote a college term paper for a relative. (I believe the statute of limitations has run out on that particular “crime”). The paper involved a subject I myself was weak in, but I did all the research. The paper got a “B.” I was pretty elated — until my relative wanted to know why she didn’t get an “A.”

Recently, there have been many stories in the media about AI (artificial intelligence), and how “thinking” computers will revolutionize the art of writing.

Apparently, there are software programs already being used by high school and college students to write essays and term papers that pass muster. All a student has to do is plug in some keywords — say, “Van Gogh,” “France,” and “madness” (and maybe “ears”) — and out comes a serviceable narrative about crazy Vinnie.

The programs are either free or very inexpensive. I don’t think they are capable (yet) of writing a novel, but I guess they’d suffice when helping an author write descriptions of people, places, or things.

Now, there are three schools of thought on descriptions.

Some authors like to paint a word picture of everything in their novels: men, women, animals, homes, forests, buildings, rooms, roads, cities, oceans, lakes, rivers, etc. Others leave all that stuff up to the reader’s imagination. The third school limits descriptions to what is really germane to the story.

I read and like all varieties of prose, although I admit that I skip over lengthy descriptions unless they have to do with blood, gore, or weapons. (By the way, I’m a thriller writer, not a maniac.)

One of my plethora of weaknesses as an author happens to be descriptions. To me, a cigar is a cigar. I may say it’s a Cuban, but I don’t mention how long it is or its color. I can’t tell a lie: I have sometimes added details to make a book longer. (What do you expect of a guy who used to ghost term papers?)

But I have never used AI!

On TV this week, I saw a piece on AI. Apparently, it can also be used to create beautiful graphics. You plug in a few words, and a picture is generated. There are a few kinks in the software. Some of the artwork comes out looking like a Picasso even if you didn’t want it to.

But most of the renderings are just what was ordered. As a self-published author who makes his own book covers, I’m intrigued. However, there are copyright issues; it’s unlikely AI software creators are limiting themselves to images in the public domain.

By the way, this entire column was produced by AI. I plugged in “brilliant,” “handsome,” and “scratch golfer,” and it just popped out.

Lawrence De Maria has written 28 thrillers on Amazon. They are all available in print and as e-books, including his latest, Solange. And that term paper he ghosted was on nuclear power. He doesn’t care what anyone says. The “B” was a terrific accomplishment!