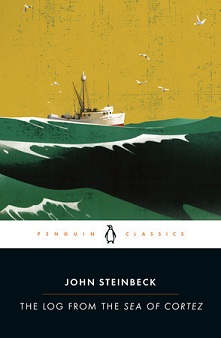 When one of history’s great novelists writes about an excursion to Baja California to collect marine samples, you should expect a model of travel writing, and John Steinbeck’s 1941 Sea of Cortez: A Leisurely Journal of Travel and Research does not disappoint.

Ed Ricketts is listed as coauthor, and more than half of the original book consists of photos and specimen descriptions by the marine biologist. Even the main narrative occasionally veers into scientific detail. But for the most part, the lucid prose, the lyrical metaphors, the often-startling turns of phrase are what you expect from a great writer.

There is some debate about who wrote what in this collaborative work, but for the reader, all that matters is that the book conveys a leisurely trip to an unspoiled Gulf of California (and what has since become the world-class resorts of Cabo San Lucas).

The mixture of travel and science found only a limited audience when it was first published, and Steinbeck reissued the narrative section as The Log from the Sea of Cortez under his name alone after Ricketts’ death (the scientist’s heirs got a portion of the royalties from this better-selling version). Now, Arion Press has released a very expensive, handcrafted edition of the original, and Penguin has reprinted the full book in a much more affordable paperback.

The author of The Grapes of Wrath, Of Mice and Men, Cannery Row, and other classics hardly squandered his talents in this book, which is finding a new audience 80 years later. The story of the relationship between Steinbeck and Ricketts, who was the model for Doc in Cannery Row and other characters in the novels of the Nobel Prize-winning Steinbeck, is itself an epic saga.

Unlike the later Travels with Charley, which was probably fictional in large part though the travels were real, Cortez is based on actual journals, and the creativity is in the writing itself. But Travels with Charley, an account of Steinbeck’s trip across the country in a camper with his dog, is a thoroughly enjoyable read that has stayed with me over the years.

Travel literature, as opposed to travel guides, is a well-recognized genre. In Travels with Charley, Steinbeck was paying homage in the title to Robert Louis Stevenson’s classic Travels with a Donkey in the Cévennes, which describes the writer’s 1878 hike through a barren region in south-central France. The book pioneered a genre that harnesses the descriptive power of an author to bring alive places we will never go in times we are often too late to experience.

There is a whole raft of writers who excel in this genre — Bill Bryson, Bruce Chatwin, Pico Iyer, Jan Morris, Paul Theroux, the incomparable Patrick Leigh Fermor, and many others.

One of my favorites is William Least Heat-Moon, who published Blue Highways: A Journey into America in 1982. A description of his travels around the U.S. on some of the small roads colored blue in the old Rand McNally atlas, it stayed on the New York Times bestseller list for 42 weeks.

His later travel writing, River-Horse and PrairyErth: A Deep Map, were less acclaimed but also very enjoyable. PrairyErth, an in-depth look at Chase County, Kansas, was particularly interesting to me because of my own childhood in that state’s Crawford County.

And Tony Cohan’s 2001 book, On Mexican Time: A New Life in San Miguel, about the charms of San Miguel de Allende and Mexico in general, resonated with me because of my own stay in the town.

But the funniest travel book I’ve read — and perhaps the funniest book, period — is J. Maarten Troost’s account of his two years on the Tarawa atoll in the Pacific island nation of Kiribati, The Sex Lives of Cannibals: Adrift in the Equatorial Pacific. The lighthearted narrative is less about sex lives (cannibals belong to history) and more about the travails of daily life in a world without many of the amenities we take for granted.

Spoiler alert: Tarawa was not paradise, and Troost, as do so many travel writers, went there so you don’t have to.