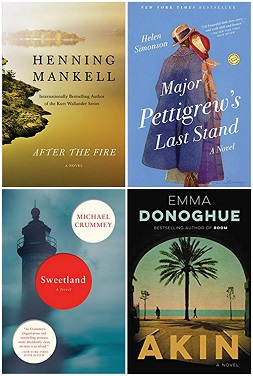 There are various thresholds in growing older, each more alarming than the previous. First comes that invitation from AARP. This is not so bad because the former American Association of Retired Persons invites people at age 50.

Then comes the threshold of qualifying for senior tickets at the cinema. This can be at age 62 or 65, but it comes sooner than you think.

Lately, however, I’ve run into a totally unexpected problem. There are more novels, or at least more novels I’m attracted to, where the protagonist is a man approaching 70, or well into his seventies. It is with some apprehension that I realize I can relate to these characters, who often are portrayed as curmudgeonly, if not reactionary, and who are haunted by regrets and a foreboding of death.

Which is not to say that they are anything but admirable.

I read Henning Mankell’s After the Fire because I always liked his Kurt Wallander novels. Fredrik Welin has retired to a small island after bungling a surgery and lives as a recluse nearing 70, estranged from his daughter.

He is awakened at night with his house in flames and barely gets out. Amid suspicion he may himself have set the fire, he encounters a journalist investigating the incident and quietly falls in love with her. His daughter also returns home, and he is reconciled with her.

The descriptions of Sweden, a life among boats, and the ambiguous pleasures of small-town life are all masterfully done. I had the feeling Mankell himself must be getting on in years because of his insight. I only learned subsequently that this last book was published posthumously in 2017. Mankell was diagnosed with cancer in 2014 and died in 2015 at age 67.

The author of Major Pettigrew’s Last Stand, Helen Simonson, is neither a man nor a senior; her debut novel was published in 2010. Along with the marvelous descriptions of East Sussex and the wry observations about the generational gap between Pettigrew and his son, there is a touching love story as the retired army major develops a relationship with a local shopkeeper, the widowed Mrs. Ali, who is Pakistani.

If these two novels treat a late romance, two others are concerned with the aging protagonists’ involvement to a related child.

Michael Crummey’s 2014 novel, Sweetland, an Audie Awards finalist, is captivating as an audiobook. Award-winning narrator John Lee perfectly captures the crotchety protagonist, Moses Sweetland, who is holding out against the government’s plan to evacuate the residents of a coastal Canadian island while mentoring his niece’s autistic son. He must come to terms with the loss of his friends, the loss of his island, and his own mortality.

In Akin, the recently published novel from Emma Donoghue, author of the 2010 bestseller Room, the protagonist, retired chemistry professor Noah Selvaggio, is turning 80 and is taking a trip to Nice, where he was born but evacuated as a child to escape the Nazis. Circumstances force him to take along his 11-year-old grandnephew, Michael. The book (which I’ve only just begun) is about the unfolding of their relationship as they both make discoveries on the trip.

Perhaps it’s to be expected that, as the boomer generation enters retirement, novels should cater to us just as popular culture has all along. I’m not sure there was a big market for septuagenarian protagonists before now. (Of course, the fact that the presidential election next year may pit two candidates in their seventies against each other also says something about our times.)

In any case, these long lives give talented authors the opportunity to portray characters with depth and unexpected quirks, but also a perspective on life that is calming in its quiet acceptance that the future is gone, and we must reconcile ourselves with the past.

Turning to books, not the paper, for reliable news.