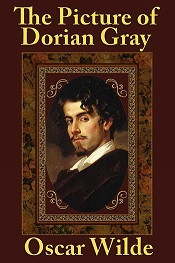 “To realise one’s nature perfectly — that is what each of us is here for.” So says Lord Henry Wotton to Dorian Gray and Basil Hallwood. The three men are gathered at Basil’s studio where he is painting a portrait of the young and impressionable Dorian. Lord Henry (called Harry) is an old friend of Basil’s, and he has taken a dark interest in Basil’s handsome subject.

As Basil paints Dorian’s portrait, his deep affection for the beautiful young man sifts into the work. At the same moment, Harry, a hedonistic dandy, bewitches Dorian with his slick moral inversions: “Every impulse that we strive to strangle broods in the mind, and poisons us. The body sins once, and has done with its sin, for action is a mode of purification.”

It’s in this triadically charged atmosphere — filial, homoerotic, metaphysical — where Basil and Harry give rise to the terribly delicious persona of Dorian Gray through their respective feelings of love and desire.

Dorian’s beauty, once interpreted by Basil and realized by Dorian himself, becomes a living artform. Under Harry’s growing influence, Dorian prioritizes style and pleasure and jettisons conventional ethics in favor of excess.

Which begs the question: Just whose “nature” does Dorian realize? The values he lives out belong to Harry, and it’s Basil’s admiration that Dorian uses to fuel his conquests. In short, Dorian Gray is corrupted by his makers.

With each tragic act Dorian initiates (e.g., the suicide of his love interest, Sibyl Vane, and the subsequent ruin of many men and women), the portrait of Dorian grows increasingly ugly, while he himself remains young and unchanged over the course of nearly two decades.

The ever-available lesson about being one’s self is at play in The Picture of Dorian Gray, as is a conventional moral fable, assuming one doesn’t read too closely.

Author Oscar Wilde, who was Roman Catholic in sensation long before he was Roman Catholic in proclamation, uses this philosophical book to examine his own “trinities.” First, how the alchemy of love, desire, and self-consciousness can forge a persona; second, a thorough-going and complex look at the connections between art, life, and the soul.

Early in Dorian’s courtship with Sibyl, he invites Harry to see one of her plays. “She spiritualises them,” Dorian tells Harry, describing Sibyl’s acting as pure artistry. But when Sibyl falls deeply in love with Dorian, all the passion is drained from her performance; life has a deleterious effect on her art.

Basil is another character who is described as a true artist, and, indeed, he dies near his painting, minutes after gazing upon the soul of Dorian Gray. Harry, on the other hand, is the only central character in the book who isn’t destroyed by his own art. His artistic instinct takes the form of witty conversation, a construct that enmeshes itself in life instead of going to war with it. Fitting, because despite his unnerving aphorisms, Harry is the most conservative character, and, for his cowardice, the only one to survive.

Dorian’s art is his everlasting beauty. Unlike the other characters, he doesn’t have to work to sustain or develop his talent. As a result, his art becomes a solipsistic thing in and of itself, discharged and renewed through the pleasures he indulges.

That Dorian is given a literal vista into the spirit world confirms for him the soul’s existence. “The soul is a terrible reality. It can be bought, and sold, and bartered away. It can be poisoned or made perfect. There is a soul in each of us.”

Basil’s dead body, slumped over in a chair and void of its animating principle, is referred to by Dorian as a “thing.” When Dorian tries to destroy his own soul by attacking the painting, he absorbs at once his accumulated sins, thus restoring the portrait to its perfect condition with one cataclysmic thrust.

Wilde countered the attacks on his work by including a commandment-style preface to The Picture of Dorian Gray. He preaches proper interpretation of his book — a risky move because writers seldom see the full extent of what they’ve created. He writes, “There is no such thing as a moral or an immoral book.” And “the morality of art consists of perfect use of an imperfect medium.”

Wilde’s contradictory attempts to convert readers to an amoral ethic of art only underscores the extent to which Judeo-Christian values had closed in around him. As with Harry’s moral subversions, opposition is not transcendence but a type of reinforcement. Whatever Wilde’s views on artistic philosophy, it’s an Old Testament version of justice that prevails at the end of this story.

“Each of us has heaven and hell in him,” says Dorian Gray. Perhaps he realized his true nature after all.

Dorothy Reno is a senior review editor and classics columnist for the Washington Independent Review of Books. Her short fiction has been published in literary journals in Canada and the United States. She lives in Tbilisi, (former republic of) Georgia. If you would like to share your thoughts on The Picture of Dorian Gray, please respond in the comments section of this article. Dorothy hopes you’ll join her in reading The Golden Dog, a Canadian classic which will be the subject of her next column in September.