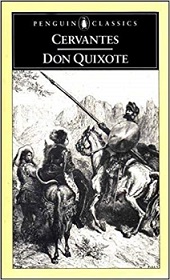 Having just been brutalized by the Yanguesans, Don Quixote and Sancho Panza lie on the ground, contemplating their agony.

The famed knight errant bears his injuries with dignity, even finding the energy to lecture his squire on “the courage to take offensive and defensive measures in every emergency,” only to be met with that squire’s brand of deflating rhetoric: “I’m in greater need of plasters than of sermons.”

Don Quixote’s and Sancho’s different takes on suffering can be taken as examples of the oft-cited illusion vs. reality interpretation of the book, but I think there is also a rather powerful meditation on pain that runs through the entirety of Don Quixote, saturating the many quests and dialogues of the story’s protagonists.

What is the sorrow that drives Alonso Quixano to dream himself up as Don Quixote de la Mancha in the first place? Boredom is implied, an explanation that spurs the adventure forward even if it doesn’t quite satisfy the sprawling demands of a deeper reading. Throughout Don Quixote, Quixano’s true motives remain as opaque as the Cave of Montesinos, into which our hero descends, vowing to see the bottom “even if it reached to the pit of hell.”

And so it does, at least in some respects.

Don Quixote weathers many hell-pits throughout his adventures, as when he narrowly survives beatings, loses half an ear, gets teeth knocked out, hangs by one hand from an inn for an entire night, sinks twice to the bottom of the Ebro River, and is subject to ridicule (including an elaborate practical joke by a mean-spirited duke and duchess), which ends with his nose being savaged off by a cat. He tells Sancho, “We who profess the strict order of chivalry are subject to all misfortunes.”

Sancho’s attitude toward pain gallops in the other direction altogether. Meeting him on page 66 of J.M. Cohen’s English translation, we intuit that Sancho’s enthusiasm to govern an isle is little more than a constant craving for comfort rather than a calling for the rewards and burdens of leadership.

At every turn, Sancho tries to “retire before the fury,” eating his pie by the river, indulging in long naps, tying together the legs of Don Quixote’s horse when he is too afraid to set out on a night adventure.

Of course, these tactics don’t always work and, like his master, Sancho is beset by calamities, the most famous of which takes place in part I, when he’s wrapped in a blanket by wool-combers and repeatedly tossed in the air. The blanket-tossing becomes a traumatic mantra for Sancho, reinforcing his belief that there’s no deeper meaning in pain, no character-forging lesson worth bravely reaching for.

What the duo says and thinks about pain is telling, even if it can’t always be believed. How Don Quixote and Sancho cope with their pain is another matter, and the very element which makes the book shriek to life. As an “endurer of toils,” Don Quixote tries to absorb the torment of “the weak,” even as he almost exclusively — reader, you might know people like this — inflames more pain than he quiets.

One need only think of the inn room he leaves in a viscous mess after slashing its wineskins into oblivion, of the puppets he beheads, of the galley slaves he frees (criminals, all of them), and especially of the mourners he ambushes.

Don Quixote yearns to make the world a better place, but first he must do what he can to destroy it. Nevertheless, his absurd condition as a wounded healer is a step on the path to empathy, which he develops fully in part II of the story.

Sancho’s coping mechanism — a combination of aphorisms and parody wisdom — is the best the book has to recommend on the entertainment front, rendering him jewel-like in the annals of literature, perhaps even more than the knight he serves. It’s Sancho’s self-mocking drive for security we most identify with, his cynicism in the face of misery and disappointment never quite slipping out of fashion, unlike Don Quixote’s self-immolating dedication.

Sancho keeps his expectations low: “Let every man lay his hand on his heart, and not set himself up to call white black and black white; for everyone is as God made him, and often a good deal worse” (emphasis mine). The squire goes easy on himself and, in the end, we don’t quite respect him for it.

Miguel de Cervantes Saavedra wrote the first and second parts of Don Quixote years apart and under strained circumstances. His storied life includes an illicit duel from which he fled to Rome, making his way back into Spain’s good graces only after he served valiantly for her at the Battle of Lepanto. There, he was shot three times in the chest by a harquebus and permanently lost use of his left arm. Following an additional four years of military service, Cervantes finally set sail back to Spain with a glowing letter of recommendation from Don John of Austria.

En route to the port of Barcelona, Cervantes was captured by pirates and taken to Algiers — the most brutal outpost of the Ottoman Empire — where he was held under ransom for over five years.

He was eventually freed and put on a ship back to Spain, where various thorns would stick in his flesh for the rest of his life: an illegitimate daughter, who acted out against Cervantes later in life (perhaps understandably so); a two-time excommunication; a double stint in prison (through no fault of his own); and, worst of all — a years-long job as a tax collector (for which he wasn’t always paid), dealing in grain requisitions for the Spanish Armada.

Don Quixote was popular upon its release, but due to various mishaps in publishing and other disasters, Cervantes’ success never generated the type of security enjoyed by other famous artists of his day.

Was he bitter? His biographers seem to think so. And though I’m in no position to argue with them, I can’t help but think of the prologue to part II of Don Quixote, where Cervantes calls the Battle of Lepanto (where he was permanently maimed, remember) “the greatest occasion which any age, past, present, or future, ever saw or can ever hope to see.”

Of his worst enemy, Cervantes says, “Let his sin be his punishment — with his bread, let him eat it, and there let it rest.” Behind these words I sense a man of deep self-regard who understood certain facts: Spanish society was not about to serve his needs, and he found personal meaning and affection in that society, anyway.

It was Cervantes, then, who would labor to offer something great to his country, not the other way around.

I imagine him somewhat like the knight he created — a hapless mystic. I see Cervantes scratching away at his manuscripts, surrendering to the aches worth feeling, sorting through all his worthwhile sorrows and knowing that they, too, can give way to an unpronounceable unity; in his case, through the conduit of art.

Alonso Quixano’s art is his performance as the fearless knight Don Quixote. The menaces visited upon him in that role may or may not distract from his original pain, the one he tries so hard to escape back in that village near La Mancha.

In the end, he fails to outrun himself — a universal human fate — yet we feel him touch on oneness when he tells Sancho, “You are a part of me.” And, finally, here, when he goes full-on holy man: “I felt more pain then in my spirit than you did in your body.”

Dorothy Reno is a senior editor and classic-books columnist for the Washington Independent Review of Books. If you would like to share your take on Don Quixote, we’d love to hear from you in the comments section below. You can join Dorothy in reading Alice's Adventures in Wonderland, which will be the subject of her next column in July.

The Harsh Lessons of “Frankenstein”