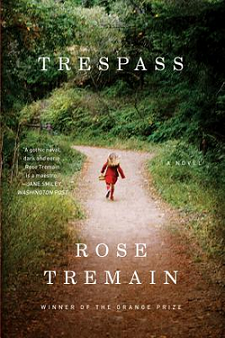 I’ve never read anything by Lynne Truss, but she was the writer featured in the regular Saturday series of the Wall Street Journal in which an author recommends the five best books in a category related to his or her own work. The category for the author of the Constable Twitten mysteries was Literary Murder, and one of the books Truss recommended is Trespass by Rose Tremain.

I was intrigued because I think of Tremain as an historical novelist and many years ago read her excellent Restoration, set in the period of the monarchy’s return to England after the painful interlude with Oliver Cromwell. In fact, Wikipedia identifies Tremain as an historical novelist, though she has, in fact, written several novels not set in the past.

Trespass takes place in the Cévennes region in southern France and involves the interaction between some older British expats and feuding French locals. It is quite literary, and there is eventually a murder. The locale is very near Uzès, a lovely small city I’ve had the pleasure of visiting a few times.

Tremain is just as adept in telling a contemporary story as she is in recreating a world in the past. It is a demonstration that the worthwhile historical novel is less about research and more about writing.

Russell Banks tells the story that when he was venturing into historical fiction with Cloudsplitter, he asked an accomplished writer of historical fiction how much research he does for each book, and this author said, “As little as possible.”

The contrast between literary historical fiction, like Restoration or Cloudsplitter, and genre fiction is precisely that you don’t clutter up the narrative with superfluous details from your research as, say, Dorothy Dunnett tended to do.

It is risky to pigeonhole a writer as an historical novelist when they can tell wonderful stories set in any period. Take Hilary Mantel, who rocketed to prominence with her trilogy on Thomas Cromwell, beginning with Wolf Hall. These are mesmerizing books, and the depth of characterization in her revisionist view of Thomas More, Henry VIII, Anne Boleyn, and company is dazzling.

But Mantel honed her craft in a completely different kind of book, such as Eight Months on Ghazzah Street, a profoundly frightening early novel about an Englishwoman’s brief stay in Saudi Arabia that was based on Mantel’s own experience. Other novels in the years before Cromwell were also set in the present or recent past but demonstrate her skill at shading characterization in a compelling narrative.

John Banville is probably best known for his Booker Prize-winning The Sea, an elegiac depiction of an aging art historian ruminating on his loves and losses. But early in his career, Banville published a trilogy of short novels — Doctor Copernicus, Kepler, and The Newton Letter — dramatizing the way these scientists changed history. Few would classify Banville as an historical novelist, however, despite these early works.

The Nobel Prize-winning Turkish author Orhan Pamuk is as much at home in the 16th-century setting of My Name Is Red as he is in the haunting contemporary novel Snow, both exploring the tensions between East and West where they come together in the country that straddles two continents.

The list goes on. Add your own writers who can travel through time or navigate the present with the same storytelling magic and literary skill.

Does “Moneyball” have a place in publishing?