A new book explains how a formerly fringe theory works during a mainstream pandemic. 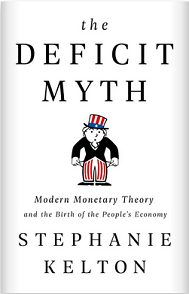 “Just tell them you write about money,” she suggested.

I’ve been writing about money in the intervening decades, and that’s still my day job. About 10 years ago, however, I walked through the looking glass, and everything I thought I knew about money and economics got turned upside-down.

This road-to-Damascus moment came when I encountered modern monetary theory (MMT). It made me see everything in a new light. With a convert’s zeal, I started writing about MMT in 2010 in my column for MarketWatch and at every other opportunity. Back then, it was a fringe notion that few bothered to take seriously.

Now, thanks to some progressive Democrats (I include Bernie Sanders), MMT has inched into the mainstream. Because it threatens many notions held sacred by establishment economists, however, it has come under savage attack, largely from so-called Chicago-school monetarists — in the tradition of Milton Friedman — as well as from politicians and financial journalists indoctrinated in orthodox theories.

But a new book from Stephanie Kelton, The Deficit Myth: Modern Monetary Theory and the Birth of the People’s Economy, debunks this neoclassical thinking in clear and accessible language honed by her years teaching at the University of Missouri-Kansas City and, more recently, at Stony Brook University in New York.

The book could hardly be timelier. Anyone puzzled by how the U.S. central bank, the Federal Reserve, could blithely add $3 trillion to its balance sheet to fund emergency programs to combat the impact of the pandemic should read it. This recent monetary expansion comes after the Fed added $3 trillion-plus to counteract the financial crisis of 2008-09 — money created out of thin air to fill the hole left by the collapse in real estate assets.

In addition, politicians suddenly abandoned their deficit hysteria with a $2 trillion rescue program and are now looking at further “stimulus” to keep the economy from collapsing. You can’t have tens of millions of people out of work and unable to buy food without riots ensuing.

The standard short version of MMT, usually used as a smear, is that deficits don’t matter. Kelton sets the record straight: Deficits do matter, but they are not the constraint on fiscal policy traditionally touted by politicians eager to lower taxes and gut government spending on education, healthcare, and retirement.

The real focus of MMT is full employment. Kelton rejects the notion stubbornly held by central bankers and other policymakers that there is a “natural rate” of unemployment that leaves millions out of work. The decline of the pre-pandemic U.S. unemployment rate to 3.5 percent baffled these people because, according to the tried-and-true Phillips curve, that should have led to higher inflation — yet inflation has been historically low, to the point that central bankers worry more about deflation.

The key insight of MMT, as Kelton makes clear, is that inflation occurs only when we run out of real resources powering the economy. The headline unemployment rate masks the number of people who are working at minimum wage, or working one or several part-time jobs — a phenomenon economists call “slack,” and which means we are far from the full employment that would lead to inflation.

What’s “modern” about modern monetary theory is that we now live in a world of sovereign currencies, and we have since Richard Nixon severed the last link to the gold standard by abolishing the U.S. obligation to exchange dollars for gold. The goal of MMT economists is to lay out the consequences of that change.

Countries that have control over their own currencies — the United States, Britain, Japan, and China, for instance — no longer face any constraints to creating more money. The constraints for their economies are those on real resources like workers, energy, and raw materials.

This is the key to puncturing one of the biggest myths about debt and deficits, and Kelton drives the point home repeatedly. Monetary sovereigns like the United States are currency issuers and bear no comparison to households, which are currency users. The federal government cannot run out of money — it cannot max out its credit card and does not need to tighten its belt for lack of money, to cite just two common political nostrums.

Recognizing this revolutionary fact opens new vistas of full employment, universal healthcare, and low-cost education as the government is now free to support these programs. Kelton has been criticized — by Heritage Foundation economist John H. Cochrane in his review for the Wall Street Journal, among others — for going overboard using MMT to champion progressive policies that look like so much pie in the sky.

And it’s true that Kelton gets carried away by her enthusiasm from working as an adviser to Bernie Sanders about the policies made possible by MMT. Unfortunately, these policies will probably remain aspirations in our lifetimes. It will take years, decades even, to change thinking on how the economy really works.

In the meantime, as the monetary and fiscal reactions to the pandemic show, panic-driven policymakers will instinctively follow the tenets of MMT. While there are still some orthodox voices warning about the long-term impact of deficits and monetary creation, legislators and central bankers rightfully ignore them as irrelevant in the face of more urgent priorities.

What to do when you lose your appetite for books?