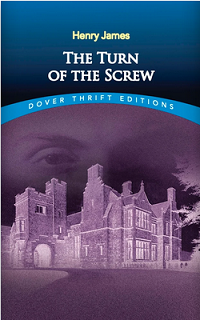 Sometimes, I worry about my leadership style. Especially regarding my son. And more recently, with our puppy. You see, I parent with a strong, highly structured approach. Basically, I like to be obeyed. This philosophy, I realize, has fallen out of favor in recent years. Hence my concern.

However, when I take stock of my laissez-faire peers and their “child-centered” homes (eccentric odors/unmannered pets), I feel urged to admit that the texture and tenor of family life is less a question of style and more a matter of personality. By which I mean self-preservation and mental stability.

After all, peace of mind can be found just as easily (for some) in maintaining order as it can (for others) in letting it all go to the dogs. It depends, I suppose, on what you prioritize; it depends, I am almost certain, on the demons you’re trying to outwit.

The character known only as “the governess” in Henry James’ 1898 novella, The Turn of the Screw, understands the outlines of these issues all too well. When she accepts a job on a remote estate as nanny/teacher to one, and soon after, two children, her employer (the children’s uncle) allows her dizzying license to care for Flora and Miles as she sees fit.

Naturally, there’s a condition: The governess must not, under any circumstances, contact or bother him. Charming fellow! At least the governess thinks so, and soon after arriving at Bly Manor, she indulges in an unlikely fantasy where the uncle shows up unannounced. Here, in the throes of revelry, she sees it: the harrowing apparition of a strange man.

Soon, another ghost appears. This one, a young woman. With the help of Mrs. Grose (housekeeper at Bly), the governess tries to make sense of who or what she’s seen. The intruders, they conclude, must be the wicked spirits of Peter Quint and Miss Jessel, the former valet and governess, respectively, at the estate.

According to Mrs. Grose, who can’t see the ghosts but responds to the governess’ descriptions of them, Quint and Jessel disappeared after having had an inappropriate relationship with each other and, it’s ominously implied, the children. Then, one after another, these “infamous” ex-employees turned up dead.

At this point, if you’re only going on my summary, you’d be forgiven for suspecting the inscrutable uncle (or maybe Mrs. Grose herself) of knocking off the profligate, potentially molesting staff members. And separately, if you are reading the book, you could be equally forgiven for noticing how often the governess and Mrs. Grose throw themselves into each other’s arms. Could all their stealing away behind closed doors to discuss ghosts and children be somehow germane to the plot?

Unfortunately, The Turn of the Screw hasn’t garnered much notice as a workplace whodunit with a plausible same-sex love story. (For that, turn to the highly watchable Netflix adaptation.) Nor is this a book about surviving abuse in any real sense, unless you count the author’s abuse toward the reader.

As far as interpretations go, debate long ago took hold around two disparate readings: Either Flora and Miles are being haunted and sometimes possessed by ghosts, or the governess is losing touch with reality and dramatizing the whole scenario owing to her crush on the absent uncle. As James likely intended, both sides have been defended with convincing heft.

R.W.B. Lewis takes the middle way in his 1981 introduction to the Bantam Classic edition, arguing the ghosts are necessary but not sufficient. Of the story’s tragic ending, which (spoiler alert) comes sharply after Miles dies, Lewis writes, “Peter Quint and the governess collaborate, by a dreadful collision of physic energies, in the death of young Miles.”

Following Lewis, my reading plays both sides and resists isolating the phantoms from the distraught mind that perceives them. The ghastly Quint and Jessel are simultaneously “not there” and “there” — appearing to the governess where her awareness is blurred, whenever the metaphorical and actual lose their distinctions. The ghosts, manifested as ominous gurgles of atmosphere, might not be otherwise detected (particularly in terms of literary fiction) without the “succession of flights and drops” in the protagonist’s psychology.

In other words, the ghosts are real. Yet it’s not a ghoul who kills Miles. The spirits, rather, are conjured by the dread earthly burdens call forth. The governess is like a first-time mother bringing home a newborn. Under the palpable worry of caring for “innocent little precious lives,” she comes to know the terror of sole responsibility.

The balance she tries to achieve in saving the children from the corrupting influence of ghosts is the same balance all parents must achieve in protecting their children from the corrupting influences of life. How much can children understand? How frank can one be in confronting danger in the presence of young minds? And, on the other side, at what point does the caretaker’s anxiety become a menacing presence in its own right?

Another important question: Do Flora and Miles see the ghosts? In my reading, the apparitions of Quint and Jessel belong to the governess alone. Beyond the pressures of guardianship, it’s her lack of experience that invites a haunting from these outrageous predecessors. In work, as in relationships, lies the coiled torment of “having history” — Quint and Jessel were at Bly first; they are the ones who got away. That the children never mention them makes the situation worse: The governess must imagine.

This doesn’t mean Flora and Miles haven’t ghosts of their own. Perhaps they encounter their deceased parents? Or they’ve awakened other phantoms to bear (or explain) the purgatorial feeling at the manor? Maybe the spirits are malevolent — or maybe they’re protective, which would put the governess in the wrong.

Nowhere in The Turn of the Screw is tension higher than when the governess faces — think about how rare this is in life — the specter of her own guilt: “If he [Miles] were innocent what then on earth was I?”

There’s horror in loss. And there’s horror in childhood. Most of all, there’s a certain horror in the prose of Henry James. Despite the electrifying premise of the story, James walks his readers around the same vague perimeters without pressing deeper into plot or psychology, which makes The Turn of the Screw feel like a work of vengeance not from lonely ghosts, but from a storyteller who can’t come out with it.

Consider this infuriating dialogue between the governess and Miles near the end of the novella:

“Of course we’ve the others.”

“We’ve the others—we’ve indeed the others,” I concurred.

“Yet even though we have them,” he returned, still with his hands in his pockets and planted there in front of me, “they don’t count much, do they?”

Who are “the others”? By this time, Mrs. Grose has left with Flora. Under the strictures of the old debate (aka the governess is nuts), these “others” could be the half-dozen manor staff we never see — waiters and maids mentioned only once, who come across thinner and more ghostly than the ghosts themselves.

If Miles is taunting the governess by speaking in a roundabout way of the hauntings (aka the governess is not nuts but has worse problems), his affect is so bland as to make demonic possession look like just another of life’s banalities.

The challenge of identifying “the others” was taken up more boldly and spectacularly by Alejandro Amenábar in his 2001 film called, appropriately enough, “The Others,” reported to be loosely based on The Turn of the Screw. And so, it must be said that Henry James’ groundbreaking work has inspired a rich tradition. Even if reading the original feels like going to bed without supper.

Dorothy Reno is the classic-books columnist for the Independent. If you would like to share your impressions of The Turn of the Screw, we’d love to hear from you. You can join Dorothy in reading Candide, which will be the subject of her next column on May 31, 2021.

Authority and American culture in The Wonderful Wizard of Oz.