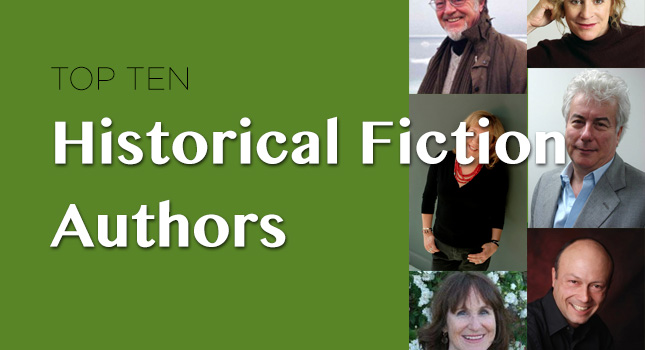 A 2012 survey of more than 800 readers revealed the top 10 historical fiction authors. Who are these writers? What makes their craft stand out? What sets them apart?

For the most part, they base their stories in long ago periods, writing about well-known historical figures either in a central or significant role. Although Tudor and medieval times are highly popular, nearly every time period from ancient Egypt to the 20th century is covered by these authors.

The top 10 tend to be prolific writers and most have been published for years. Two have written more than 50 novels; four others have written more than 20. Most have written series or concentrate on a particular time period so readers know what to expect and are familiar with the main characters. Readers can really dig into these authors, securing hours and hours of reading pleasure.

Here’s a look at their writing and thoughts on historical fiction.

1) Sharon Kay Penman: Ever since writing her first book The Sunne in Splendour about Richard III, Penman has been “happily ensconced in the Middle Ages.” She tends to write trilogies, such as The Welsh Trilogy set in the time of King John and Henry III, which includes Here Be Dragons, Falls the Shadow and The Reckoning. In an interview, I asked her to list the ingredients that make for a top historical fiction author. Her response: “Historical accuracy is very important to me, both as a reader and a writer. I also believe that we owe a debt to the people we are writing about. My fellow writer, Laurel Corona, expressed this perfectly when she said, ‘Do not defame the dead.’”

2) Philippa Gregory: Philippa Gregory has written more than 30 books and is best known for her Tudor series, particularly The Other Boleyn Girl but also including The Constant Princess, The Boleyn Inheritance, The Queen’s Fool, The Virgin’s Lover and The Other Queen. In a presentation to the 2012 Historical Novel Society Conference, Gregory, a former historian, spoke eloquently about her craft. She sees the historical novel as “animation and recreation of a life, the fleshing out of historical bones” to put “life into the skeleton.” In her words, historical fiction “rescues history from the past” and “conquers death and time.”

3) Elizabeth Chadwick: Although she began her career “writing at the more romantic end of the historical fiction genre,” Chadwick considers her more recent works to be biographical fiction set in the medieval period. Lady of the English, for example, tells the story of Matilda, daughter of Henry I; The Greatest Knight begins the story of William Marshal in service to Eleanor of Aquitaine. In an interview on A Writer of History, Chadwick said that a “top historical fiction author will be someone who can tell a story that brings the past to life while maintaining the historical integrity. There should be sufficient drama, history, entertainment and food for thought to keep the reader busy from beginning to end.”

4) Diana Gabaldon: Best known for her time-travel series Outlander where the primary action takes place in the 18th century, Gabaldon has now written eight books in this series including Outlander, Dragonfly in Amber and An Echo in the Bone. Speaking on Author’s Road, she describes her books as “indescribable” and mentions that they have been listed as literary, fiction, fantasy, historical fiction, romance, science fiction and mystery. According to an interview published in Scottish Memories magazine, “her books average a thousand pages and take about two years to write.” In reference to writing about history, Gabaldon is quoted in the same magazine: “It seems to me that a historical novelist has considerable responsibility for accuracy — not merely to the contemporary readers, but to the people and times of the past.”

5) Bernard Cornwell: A prolific writer of adventure stories loved by both men and women. He has written over 50 books including series such as The Saxon Chronicles (England during the 9th-century reign of Alfred the Great), Sharpe books (tales about an English soldier during the Napoleonic wars), Grail Quest (set in the 14th century) and The Warlord Trilogy (based on the life of King Arthur). According to an interview in The Telegraph, Cornwell says “all the work in writing is working out the plot” and in an interview on HarperCollins’ website, he says “most of my books are intended to be pure entertainment.”

6) Ken Follett: Originally Ken Follett made his name writing standalone thrillers like The Key to Rebecca, The Man from St Petersburg and Eye of the Needle. Many were set in and around World War II. Subsequently he has become known for two celebrated series, one set in medieval England (Pillars of the Earth and World Without End) and another called the Century Trilogy, which begins with Fall of Giants set during World War I. In an interview with Dave Itzkoff of The New York Times, Follett maintains “the novel has to engage the reader emotionally. All the dramatic things that happen in thrillers — chases, interrogation, deception, romance — only work if the readers care about the people involved.”

7) Anya Seton: Some of this deceased author’s novels are biographical in nature while others are historical romances. She is best known for Katherine, based on the life of 14th century Duchess of Lancaster Katherine Swynford. Other bestsellers are Green Darkness, Dragonwyck, Avalon and The Winthrop Woman. Her novels cover a mix of time periods including the 19th century and Saxon England. Jane Johnson, a very successful historical fiction novelist, cites Seton’s Avalon as one of her favorite books of all time. Johnson describes Seton’s writing as “vivid, epic, gritty and romantic all at once.”

8) C.W. Gortner: His first novel, The Last Queen, was published in 2008, and has risen rapidly into the ranks of favorite historical fiction. Gortner has written about three famous queens and has produced two novels in an Elizabeth I Spymaster series. When asked about favorite fiction on A Writer of History, he said, “I think what truly makes for success in historical fiction is authenticity.”

9) Alison Weir: Originally well known for historical non-fiction, Weir has now written several biographical novels such as The Lady Elizabeth (about Elizabeth I’s life before becoming queen) and Innocent Traitor (about Lady Jane Grey). She has concentrated her fiction and non-fiction works in Tudor and Plantagenet times. On her website she says: “History belongs to us all, and it can be accessed by us all. And if writing it in a way that is accessible and entertaining, as well as conscientiously researched, can be described as popular, then, yes, I am a popular historical, and am proud and happy to be one.”

10 - tie) Margaret George: In an interview on A Writer of History, Margaret George says: “I think the combination of escapism and education is what fuels a top historical fiction author. People want to escape into another time but they want to learn about that time as well. [The history] should not serve as just wallpaper against which the action takes place.”She specializes in fictional biographies of famous women like Helen of Troy, Mary Magdalene (Mary Called Magdalene) and Cleopatra (The Memoirs of Cleopatra).

10 - tie) Georgette Heyer: During her writing career, Heyer wrote many Georgian (such as These Old Shades) and Regency (Arabella, A Civil Contract) romances as well as fictionalized history (The Masqueraders, Simon the Coldheart) and detective fiction (The Unfinished Clue). She wrote her first novel, The Black Moth, when she was 17 and completed more than 50 in her lifetime. She is known for historical accuracy, witty dialogue and engaging plots, a combination that made for great escapes especially in times of war and the Great Depression.

Examining these writers and their writing suggest that success rests on an effective combination of historical accuracy, breathing life into history, dramatic plots, emotional engagement, accessible writing and food for thought. The top 10 historical fiction authors have mastered each of these ingredients. No wonder their fans eagerly await every upcoming novel.

M.K. Tod writes historical fiction and blogs about all aspects of the genre at A Writer of History. Her debut novel, Unravelled: Two Wars. Two Affairs. One Marriage., debuts in paperback and e-book formats on September 19, 2013. She can be contacted on Facebook, Twitter or via email at mktod@bell.net.