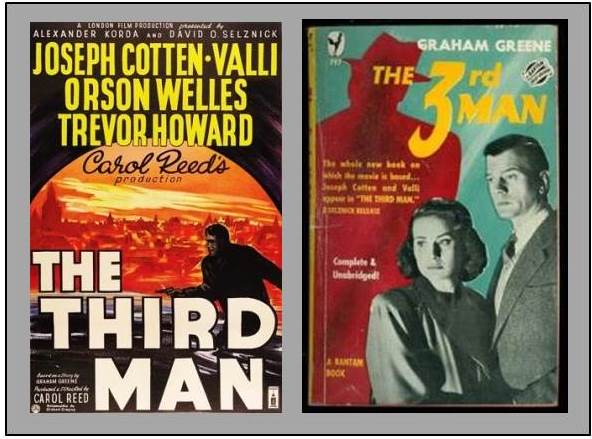 I always thought of “The Third Man” as one of the classics of cinema. The 1949 movie, directed by Carol Reed and starring Orson Welles and Joseph Cotten, is a dramatic and atmospheric film noir set in postwar Vienna and one of my all-time favorites.

The screenplay was written by none other than Graham Greene, the great British novelist. And The Third Man, I learned in a recent seminar at Politics & Prose, is also a novel by Greene. But—and this makes it unusual—the film wasn’t based on the novel. Rather, the novel was a fuller treatment Greene had written for himself and published only after the film came out.

“Even a film depends on more than a plot, on a certain measure of characterization, on mood and atmosphere,” Greene wrote in 1950 when he published the novel, “and these seemed to me almost impossible to capture for the first time in the dull shorthand of a script.”

Greene was far less proprietary about this treatment than he would have been about a published novel. Seeing the differences between the film and the book, the reader “should not imagine these changes were forced on an unwilling author,” Greene says. Rather, they were the result of a creative give and take between Greene and Reed while making the film.

“The film, in fact, is better than the story,” Greene concludes, “because it is in this case the finished state of the story.”

Perhaps, but the novel can deliver fresh insights to a reader and is a case study in how the two media have different strengths.

It starts with the first sentence of the novel: “One never knows when the blow may fall.” In a handful of words, Greene has engaged the reader and drawn him or her into a mysterious encounter amid the rubble and poverty of occupied Vienna.

The ability to suddenly drive home a universal truth with a dazzling economy of language makes the novel a far more finished work than Greene’s modest introduction might suggest. For instance, when describing the relationship of protagonist Rollo Martins (Holly Martins in the movie) to the mysterious Harry Lime, Greene writes: “We never get accustomed to being less important to other people than they are to us,” surely a sentiment everyone can identify with.

The novel abounds with insights such as these. At the same time, my reading of the book was enhanced by the images burned in my memory from the film. The Third Man is one of those rare instances when both the novel and the film are great works of art. The most enriching experience of all is to indulge in both.

(The novel is available in paperback and the movie in DVD or streaming video.)