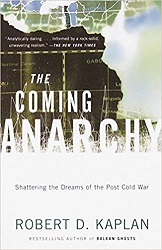 In many ways, Robert D. Kaplan is a writer after my own heart. A prolific analyst now affiliated with the Eurasia Group, the former foreign correspondent and policy strategist has produced a steady stream of books and articles on how geography and history impact events.

Kaplan enlivens his books with firsthand observations as he logs thousands of miles traveling in Asia, Africa, the Balkans, and other remote corners of the globe. He is intrepid.

He was embedded with a Marine unit in Iraq and bunked down in a Navy submarine in the Pacific. He most recently drove across the United States, replicating the road trips of his truck-driver father in an effort to find out why Donald Trump was elected president.

It was first and foremost his 1994 article for the Atlantic, “The Coming Anarchy,” that turned him into a leading pundit. His colorful, if dark, portrait of corruption and failed states in West Africa and other regions was, for him, a forecast of where the whole world was heading as “scarcity, crime, tribalism, and disease are rapidly destroying the social fabric of our planet.”

He did not invent, but he certainly popularized, the metaphor of developed countries as a New York stretch limo driving obliviously through the potholed streets and homeless shambles of the rest of the world. (It was political scientist Daniel Deudney who came up with the metaphor.)

That gloomy article became part of the 2000 book, The Coming Anarchy: Shattering the Dreams of the Post Cold War, which included other cheery essays like “Was Democracy Just a Moment?”

That was just one of a dozen-and-a-half books and countless articles in the Atlantic over three decades. The titles reflect Kaplan’s preoccupation with geopolitics. Balkan Ghosts: A Journey Through History; Monsoon - The Indian Ocean and the Future of American Power; The Revenge of Geography: What the Map Tells Us About Coming Conflicts and the Battle Against Fate; and Earning the Rockies: How Geography Shapes America’s Role in the World are just some on my shelf.

As befits a writer who has taught at the Naval Academy and consulted with the State Department and Pentagon, Kaplan grapples with big issues of national security and global strategy. He never underestimates hard power; he is always willing to puncture the blithe optimism of the hopey-changey crowd. Above all, he is relentless in describing the role of terrain in determining the fate of populations.

And all this extremely stimulating to read, bristling with insights that help navigate a world that often seems to be unraveling. But this is precisely where, Emersonian optimist that I am, I part ways with Kaplan.

His vision is too dark.

The world has its problems, but anarchy has not engulfed the planet. Geography exacts not only revenge, but, as Kaplan himself can lyrically describe, opens up boundless possibilities in the trek across the Great Plains to the Rockies.

My own 1994 book, The New Superregions of Europe, also deals with the impact of geography and history on current events, describing how the integration of Europe rekindles historic ties in regions artificially divided by the Iron Curtain and national boundaries. But Superregions is a fundamentally optimistic book (too optimistic, as it turns out, in view of Europe’s current problems), and the reason is its strong economic component.

For all of Kaplan’s Malthusian concerns about resources, he underplays — like so many experts enmeshed in the Washington security apparatus — the role of economic forces in capitalizing on these resources. He by no means ignores them, but consistently underestimates the ameliorating effects of innovation, ingenuity, and aspiration that drive economic growth and result in a rising tide of prosperity.

The glass is half full. I’ll continue to read Kaplan with great interest for his stimulating insights — and follow up on the numerous helpful references he gives along the way. But I’ve learned, no matter how alarmist and trenchant his observations are, not to lose a whole lot of sleep over them.