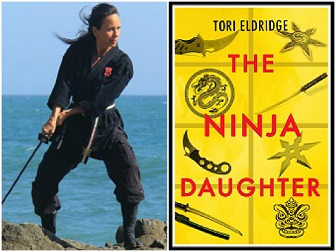 In her debut novel, The Ninja Daughter, author Tori Eldridge turns a young woman with a passion for justice into a modern-day martial-arts hero.

Lily Wong is an anachronism — a protector of women whose nickname is Dumpling. Her family is a mix of cultures: Her Norwegian-Viking father is a master chef, running Wong’s Hong Kong Garden restaurant in Culver City, California, while her mother is a Chinese porcelain doll with a lioness stuffed inside.

Lily herself is “a woman of patchwork heritage, honoring her Chinese Buddhist ancestors by practicing martial arts, then wrapping herself in the Norwegian Rosemaling quilt her grandmother had sewn for her.”

In public, Lily once competed on the Wushu martial-arts team at UCLA. But after someone murdered her younger sister, Rose, she secretly began training in Ninjutsu and eventually hunted down Rose’s killer. Now she is a devoted kunoichi — a female ninja. “Wushu rooted her in her Chinese heritage and gave her grace and athleticism. The Japanese art of the ninja gave her purpose.”

Lily uses her kunoichi skills to rescue abused women on behalf of a local battered-women’s shelter. But she also lives in a “shadow world,” performing “ninja pro bono work” for any woman who needs her help. “She hadn’t trained in the shadow arts to become an assassin, but to help, empower and protect. She wanted to be a big sister to women who needed one.”

Here, Eldridge, a real-life blackbelt, gives us the scoop on what makes Lily tick, and why fighting for women is so important to her.

What inspired the character of Lily Wong?

Lily appeared to me in a stream-of-consciousness writing for a short story. I literally met her as the words hit the page. After publication, I realized I had written the pivotal scene of what would one day become a novel. When I was ready to write it, I discovered who she really was.

Is there a particular experience that fuels your commitment to empowering women?

There wasn’t just one experience, but an accumulation of experiences, beginning from childhood and continuing to present day. Some of these experiences have been empowering, and others decidedly not. When I had achieved a senior rank in martial arts, I wrote a nonfiction book called Empowered Living Expanded Edition: A Guide to Physical and Emotional Protection. In it, I shared empowerment strategies, exercises, visualizations, and over a dozen personal anecdotes. I taught workshops on empowerment across the country and blogged about mindful living for about 13 years.

How have you incorporated your heritage and martial-arts expertise into Lily’s character?

Lily’s mother is Chinese from Hong Kong. Her father is Norwegian from North Dakota. She was born and raised in Arcadia, a city in Los Angeles County. And she is an accomplished practitioner of the ninja arts. I’m Chinese-Norwegian-Hawaiian, a fifth-degree blackbelt in To-Shin Do Ninjutsu, and have lived in Los Angeles for over 35 years. That said, Lily Wong is most definitely not me.

It was very important to me that I portray my Chinese-Norwegian heritage and the ninja arts with depth and authenticity. Lily’s cultural mix — including the Japanese influence of her ninja sensei — defines her personality and colors her way of looking at the world. In this way, she serves as a microcosm of the city in which she lives and the people she strives to protect.

I also wanted to blast through the ninja stereotype. Most people don’t realize that Ninjutsu has been around for hundreds of years — by some accounts, 1,200 — and passed down from nine different lineages. There are thousands of ninja practitioners all over the world training diligently and doing their best (I hope) to make the world a safer, more empowering place to live. Lily is one of these modern-day ninja who has devoted her life — in a very real and dangerous way — to protecting women and children.

Like Lily, do you have a kamidana (spirit shelf) in your home?

I have two — one downstairs in my kitchen over a built-in desk and the other upstairs in my bedroom. Lily has a classic Shinto shrine sitting on top of her god shelf that houses traditional spirit items such as an ofuda, shintai, rice, salt, and plants. I decorate my spirit shelves with objects that have emotional and spiritual significance to me.

The centerpiece of my kitchen kamidana is a silver statue of Quan Yin, the Goddess of Mercy and Compassion, standing on a curled dragon. On either side of her sit teacups of great significance, along with two small teapots, a citrine crystal, a bronze sitting Buddha, and a bronze Vajra thunderbolt and bell. My bedroom kamidana holds my mother’s classic porcelain Quan Yin statue, surrounded by a double-terminated amethyst crystal, a smoky crystal, two phurba daggers, and an orchid plant. While my kamidana are far from traditional, they serve as spiritual focal points in my home.

Is there a message you’d like readers to take away from The Ninja Daughter?

Lily Wong is an empowering, complex, multicultural young woman striving to be a big sister to a city and redefine her relationship with her parents as an adult. The issues, doubts, and dangers she wrestles with are relatable to so many people, I hope my book resonates and inspires conversation. I even have an awesome book-club kit to get the discussion started.

Can we look forward to another Lily Wong book?

The second book in the Lily Wong series releases September 1, 2020.

Is there any advice you’d give to other authors, especially those yet to be published?

Keep writing and focus more on the process than the result. It will keep you calm, sane, and creative.

Do you still practice martial arts?

I’ve always been an immersive person. When I decided I wanted to pursue fiction writing as a career, I stopped teaching and training and devoted my time, energy, and resources to the goal. I now maintain a reasonable amount of fitness, flexibility, and skill, but nothing compared to the strength and skill I once enjoyed. But that’s okay. Every stage of my life has produced different priorities. What’s important to me now — aside from family and friends — is a healthy body, a calm mind, and a fulfilling career as a novelist.

Tell us something about yourself that your fans don’t already know.

Every morning, I meditate before I step out of bed.

Lily Wong is a blend of many things. She’s also a woman with a purpose who takes control of her life. Reading The Ninja Daughter is like celebrating diversity, women’s strength, and the fight for justice all in one action-packed story. Just like Batman guards Gotham City, Lily is a guardian of women. Wouldn’t it be amazing if we could all have “Dragon protection”?

How do you spell EMPOWERED? I spell it LILY WONG. You go, girl!