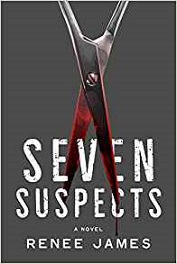 I love diversity in books. And you will find no heroine more diverse than Bobbi Logan, the transgender-woman protagonist in Renee James’ newest thriller, Seven Suspects.

Bobbi is not your average hairdresser: “All the things that make me a less-than-perfect woman make me a somewhat intimidating opponent,” she says. “I’m six feet tall, I have broad shoulders, I’m strong for a girl, I work out a lot, and I’ve been taking self-defense classes for years. More important, I have resolved I will never be a victim again.”

She was a married man in her prior life. Her ex-wife, Betsy, is one of her best friends, and she loves her ex’s daughter, Robbie, like her own.

Bobbi's sixth sense can’t help but feel someone is watching her. Although it’s been a decade since she was raped, she’s still keenly aware of her surroundings. “Time will never sweep away this memory. It will live in me like a virus that alternates between dormancy and soul-searing eruptions…A poisonous fusion of rage and fear and betrayal [that] bubbles and churns and you want to explode like a volcano.”

At first, Bobbi wonders if she's imagining things — it could just be her hypervigilance — but then the vandalism starts. Destruction at her salon and home, lewd drawings, and sexual slurs let her know that she’s a target. But of what? And by whom?

There are six men who might wish her harm. Never one to shy away from trouble, Bobbi investigates them herself. But it bothers her there are only six suspects and not seven. A client who’s an actuary once told her that our lives are organized by sevens, like days of the week. She can’t help but feel there must be a seventh person on her list.

As Bobbi investigates the six, the violence escalates, until her stalker finally confronts her. There can only be one survivor, and she’ll be damned if it will be anyone but her.

I love Bobbi Logan. She’s courageous but also afraid. Although she frequently feels vulnerable, she doesn’t portray herself as a victim. Like everyone, she has insecurities, but she knows that being transgender intimidates people. Some just don’t know how to respond to her, some ridicule her, and some (including her former in-laws, the “Midwestern Nazis”) despise her. But she's vowed to never again lie about who she is. At some point, a person just has to be themselves, consequences be damned.

“Me, I’m done hiding. I hid from who I was for thirty-eight years. When I transitioned to Bobbi Logan, I became an ugly woman and the object of disapproval, but I was me, by God. And I’m not going back behind the curtain.”

Here, author Renee James explains the story behind the story.

Bobbi Logan is the ultimate heroine. Is she informed by your own firsthand knowledge of living in two genders?

There's a lot of me in Bobbi's backstory — the part of her life she lived before transitioning. I cast her male persona as a white-collar marketing professional — tall, attractive, athletic, and competitive. "Robert" had my vocabulary and sense of humor, and had many doubts and reservations about becoming Bobbi.

I made Bobbi an artistic hairdresser because doing hair was always a secret passion of mine. I finally went to beauty school late in life just to experience the craft and art of it, and enjoyed the experience deeply. Bobbi's career is a sort of realization of my own dreams. Mostly, I think of Bobbi as a better version of the woman I might have become, but with many of the same needs I have — for family connections, for romance, for artistic expression, for succeeding, and for living a good life.

Most people assume I'm a fully transitioned woman, even though I make clear in my bio that I'm not. Like many of my contemporaries in the trans community, I found many reasons not to transition and chose to live my life in both genders instead.

Ironically, when I came out in the early 2000s, this life of dual identity seemed to be more common than transitioning, but with changes in public attitudes and improvements in the science of transitioning, more people transition today. Transsexual men and women have become the public images of the greater transgender community.

Your first novel in the Bobbi Logan series, Coming Out Can Be Murder, evolved from a fictional journal you wrote when you decided not to transition.

I started the journal to express some of the realities about transitioning that I had learned while considering it. Those of us who haven't transitioned tend to think all our worldly problems will disappear as soon as we're in the right body. But I came to realize it wasn't true, at least, not for me. So, I wrote the journal imagining what it might have been like for me. The first realization was that transition is something most of us do on our own, without spousal or family support, and back in the early 2000s, transitioning was done in a fairly hostile environment.

Two things happened as I wrote the journal. First, the creation of this fictional version of myself became passionately engaging for me. I wrote in airports, on airplanes, in hotel rooms, and anywhere else I had time to kill. It was more enjoyable and stimulating than anything I'd ever done before.

The other thing was, after about 20 or 30,000 words, I realized I had created a really interesting character — a trans woman of intellect, accomplishment, and grit, but also a woman who was much more self-doubting and vulnerable than heroines were supposed to be. In other words, a character who hadn't yet appeared in fiction or film. So, I wrote a book about her.

Bobbi must not only overcome the prejudice of others, but she also struggles with self-identify and self-esteem.

I think most of us in the trans community harbor profound internal conflicts that can make for fascinating character studies. We have body issues, like so many binary people do, but beyond having the right plumbing and body parts, and even beyond appearance/attractiveness issues, many of us wonder about our authenticity. Am I a real woman, or am I some mongrel blend of genders? Are my emotions authentic? Do I think like a woman or am I thinking like a man but in a woman's body?

In today's world, I think we're all supposed to be self-assured, confident, forward-looking people — whether we're trans or straight — but that's a fiction, and it's also boring. The self-doubts and striving to achieve some distant standard of being are the ultimate complexities in a lead character. I find Bobbi's examination of gender ideals and her sense of her own shortcomings to be far more interesting than a poised, perfect super-heroine whose only challenge is external.

Although Seven Suspects entertains readers with its “race against time” narrative, the novel also contains a powerful message.

The motive behind all my Bobbi Logan books is to introduce the general population to a transsexual woman, to let them walk around in her world for a while. Bobbi is likeable and easy to empathize with, and if you engage with her long enough to read one of these books, you'll come away with a different perspective on transgender people than you had before — that you will find us much easier to approach and talk to in social settings. You also might be less receptive to some horrid mischaracterizations of us by the right-wing.

Diversity is important in our entertainment, and when it comes to transgender people, we have decades of movie and television abuse to overcome, so having a trans character who is smart, funny, courageous, and highly ethical is an important statement.

The other important aspect of Bobbi's character is that she constantly grapples with the grey areas of morality. For people with rigid beliefs, there's right and wrong. For people like Bobbi, who view the world with empathy and sympathy, there is a vast grey cloud spanning the gap between right and wrong, where what's moral and decent is harder to see. My favorite characters in fiction all wrestle with these uncertainties.

You’ve personally been involved in the evolution of Chicago’s transgender community.

Like other cities and states, our community isn't a single, monolithic group. There are distinct divisions among us by age, race/ethnicity, socio-economic status, and geography. The obstacles we face vary widely among these divisions. For example, most of the violence perpetrated against transgender women occurs to women of color in lower-income neighborhoods.

In the 80s, 90s, and early 00s, transgender associations were the beacon of hope and understanding for many male-to-female trans people. Such groups had gatherings in "safe" places, with speakers on topics ranging from feminine arts to social protocols.

For all the bad press the Chicago Police Department gets, it was one of the first in the nation to provide training materials to officers on the subject of how to deal sensitively with trans people. I still consider them to be among the most sophisticated and understanding police forces in the world in dealing with the trans community.

If you want to better understand a group of people you might not know well, Renee James’ Seven Suspects is replete in diversity not only in its characters, but in the author’s understanding that people should be true to themselves, even if that makes them different. Kindness goes a long way.

Bobbi Logan sums up her faith in a life well lived: “I’m not religious, but I believe the good among us have souls and I believe our souls glow with warmth with each act of humanity we perform.”

I’m whistling and cheering for Bobbi Logan and Renee James, slapping them high-fives, then wrapping my arms around them in a big, appreciative, virtual hug. You are my heroes!

What I was reading when…