Sick in bed, the author curls up with some disquieting reading. 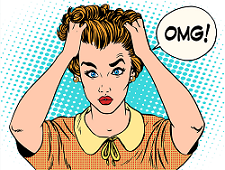 During the last week of January, I was hit by a freight train. Well, okay, it was an irritatingly anonymous, unnamed virus that kicked me to the ground and left no forwarding address. I couldn’t even claim the moral high ground of having gotten the flu, something people treat with respect and deference.

To say that I had a cold is to call up images of some genteel lady sniffling demurely into a lace handkerchief, instead of the reality of a barking, dripping brute with glassy eyes and a bottomless supply of phlegm.

It’s amazing how strong the impulse is to go to work. After all, it’s just a cold. Who stays home all week for a stupid cold? What does it matter that your brain is slogging hip-deep through sludge and you’re incapable of stringing two thoughts together?

But nothing matches the seething hatred of your colleagues when you drag your sorry butt in while still hacking up a lung. At that moment, they really don’t care that you’re not dead yet; they just want you and your germs to get the hell out of their air space.

And don’t touch anything!

So, instead, you and your misery share the couch, mainlining Mucinex and NyQuil, aggravated that you are at home but fully incapable of getting even one task accomplished.

Things were so bad that week that — even though I’d just finished reading Elizabeth McCracken’s Bowlaway (a quirky good time) and listening to Louis Bayard’s Courting Mr. Lincoln (brilliantly imagined and executed) — I could not bring myself to start another book. I can’t remember that ever happening before.

The best I could do was finish up my remaining New Yorkers and, for the first time in perhaps three years, actually read the newspapers the day they came to my door.

That may have been a tactical error, since it was the same week that the Senate decided it was high time to cede/forswear/relinquish/renounce/surrender/abjure/abdicate/jettison its role as a co-equal branch of government, choosing instead to grovel before the awesome power of the unitary executive’s polling numbers and mighty Twitter thumbs.

Certainly, it made a compelling argument for flushing The World’s Great Deliberative Body down the president’s oversized golden commode.

It was also the week that Kobe Bryant, his daughter Gianna, and seven others died in a helicopter crash. It was the week that a Washington Post reporter, Felicia Sonmez, was suspended (though quickly reinstated) for reminding people that Bryant had been credibly accused of rape, of leaving his 19-year-old victim with lacerations “too numerous to count” according to the medical examiner, and bruises around her neck. The victim was excoriated by the public in the ugliest terms imaginable. Bryant was too beloved for her to be telling the truth, even about things he admitted to doing.

Sonmez was suspended because “her tweets displayed poor judgment that undermined the work of her colleagues,” in the words of the person suspending her. Apparently, it was an inconvenient time to report on the news. Plus, the reporter — a sexual-assault survivor — was excoriated by the public in the ugliest terms imaginable, accompanied by threats of rape and death, and the publication of her home address.

Monica Hesse wrote a beautifully empathetic column in the Post that week, “The Stories We Tell About Kobe Bryant,” in which she captured exactly what I had been thinking:

“I wonder what it would be like right now, to watch the world around you open up in love for the man who hurt you. To hear people tell you that this wasn’t the time to remind the world of your pain, and it may never be that time again.”

I had been thinking that even before reading Hesse’s column because, in an odd bit of timing, it was the same week that Mary South’s short story, “You Will Never Be Forgotten,” ran in the New Yorker. It starts:

“The rapist is such an inspiration that he started a newsletter to share his story…It’s a meditation on health, tech, spirituality, culture, and, of course, pushing through limitations and not understanding the meaning of the word ‘no.’”

It’s a devastating read that shows how a nonconsensual sex act makes virtually no impression on the aggressor, who remains untouched, while the victim is consumed. For her, he will never be forgotten; for him, she was barely a blip on the radar.

While we’re at it, that week was also smack in the middle of Harvey Weinstein’s rape trial, during which each witness had been dragged through every clichéd, made-for-TV attack as to what they were wearing and why they didn’t fight harder.

(And what is it with these formerly powerful men showing up to their trials attempting to appear as frail as possible? First it was Bill Cosby and that ridiculous vaudeville bamboo cane; now it’s Weinstein and the walker. Are we buying this?)

Late in the week, when my brain was finally only ankle-deep in sludge, I started reading a book for review, Rebecca Solnit’s memoir, Recollections of My Nonexistence, another stark reminder of the many ways that women are consistently dismissed, silenced, abused, and generally treated as inconvenient.

After everything I’d been reading, one of many quotes that struck me was Solnit’s observation of a famous artist she was trying to write about who was both married and “frisky,” and who left her with “a sense that since young women are nobody, nothing you do with them is on the record.” Especially when you’re a powerful man and she’s, well, nobody.

It’s 2020, and we’re celebrating a hundred years since women won the right to vote, yet lately it feels as though we’re taking big steps backward. Good thing it’s an election year.

It took about 10 days for me to finally slough off the misery of that stupid cold and feel ready to join the human race again. But I find that I haven’t been able to fully shake the after-effects of my week of wall-to-wall reading about the perpetual silencing of women.

Time to go make some noise.