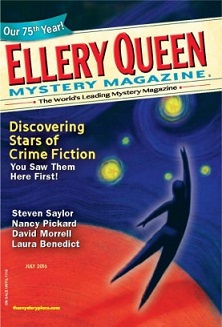 Lately I’ve been thinking about short fiction and why people don’t read it.

Don’t get me wrong. I read poetry and short stories and novellas (okay, not as much poetry as I should), and plenty of other people I know do, as well. But those “other people” tend to be writers, and they have a different regard for short fiction than the general public. They studied short fiction, wrote it, and ended up appreciating it. Then they entered the world of publishing and realized that agents, big publishers, and the general public weren’t clamoring for work less than book-length, especially if it told more than one tale.

Art Taylor touched on this question in his first column for the Independent, and it’s been echoed by others — why isn’t short fiction more popular? It’s a common debate among writers, likely because no one has the answer. I mean, come on: Short fiction is cool. It’s fast. Punchy. Hard-hitting. If a novel is an opera, then an anthology of short stories or poems is a mix tape, each track with its own unique beat, creating its own music. The best practitioners — Carver, Chekhov, Atwood, O’Connor — rip out your guts in a handful of pages. So why aren’t readers buying short-story collections in droves?

This angry little article (which Art linked to) spent a lot of time debunking the idea that short stories were enjoying a comeback…but it didn’t explain why they aren’t more read. And that’s probably because, as I said above, no one really knows.

There have been some attempts to market short fiction toward these contemporary times with small successes here and there, largely based on the theory that our shorter attention spans are a unique match to quick reads. Imagine, the assumption usually goes, that you could read a short story in line at the bank. But the problem with that theory is that, when most people hunt for a distraction on their smartphones, a short story isn’t as compelling as checking Facebook or Twitter, or hurling annoyed birds at smug pigs.

Perhaps the problem is that, ultimately, the short story has always been, and will always be, a niche market. The publications that pay the most for them — the New Yorker, the Atlantic, Harper’s — rarely make fiction the focus of their magazine.

That said, some print publications dedicated to the form have survived. Although 2016 witnessed the last issue of Thuglit (one of my favorites), Ellery Queen and Alfred Hitchcock’s Mystery magazines pressed on, undaunted. Online sites and apps (such as the terrific new apps Tapas and Great Jones Street) are experimenting with exciting ways to bring short work to new readers. It’s too early to tell if those apps will be successful, but they’re deeply invested in the idea of reaching and expanding that niche market.

But still, there’s little that critics and commentators love to do more than to proclaim something dead. The poor novel is pronounced DOA every few years, even as its continued existence refutes that designation. This pronouncement happens largely because critics make a mistake when classifying novels and short stories. They consider those forms in the same way they would a musical genre (musical genres also frequently die, according to critics). But novels and short stories aren’t genres. They’re music itself.

A short story is still one of the best ways to teach a new writer about crafting characters, or how to convey the passage of time in a handful of sentences. You can almost guarantee that, every few years, a new collection will spark interest in readers.

And every generation has produced, and will continue to produce, devoted readers who get caught up in short stories, who turn the last page of an anthology dazed. Even if short stories are under-read, they’re never unloved.

Speaking of short stories, my collaborator, DJ Alkimist, and I will be releasing our newest “short stories + music” track, “Red Room,” on January 25th. It will be released on Thrill Seekers Radio, hosted by Alex Dolan. Click here for more information.

In defense of The Great Gatsby

5 Gifts for the Bookworm in Your Life

A little something for even the most pretentious of readers.