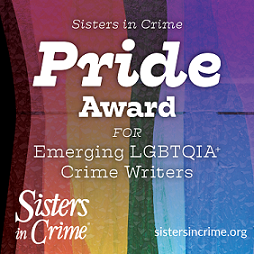 Since its creation in 1986 by a group of 26 women crime writers led by Sara Paretsky, Sisters in Crime (SinC) has been the strongest advocacy organization in crime fiction and one of the strongest throughout all of publishing.

Originally designed to provide support services and ensure parity for women writing crime, SinC has since expanded its efforts and become a staunch ally to writers of color, LGBTQIA+ authors, and marginalized voices in and out of publishing.

That mission continues with a new grant, the Pride Award for Emerging LGBTQIA+ crime writers. The Pride Award is the legacy project of past SinC president and Northern Virginia-based writer Sherry Harris and offers a cash prize to the winner. I recently spoke with Harris and John Copenhaver (one of three judges — along with Cheryl Head and Kristen Lepionka — on the selection committee) about the grant.

Sherry, why did you choose the Pride Award as your legacy project?

It was a combination of things. In 2016, I attended SinC into Great Writing, a half-day event held at Bouchercon. The event was set up by then SinC past president Catriona McPherson. Catriona, along with Frankie Bailey, also led the team who wrote Report for Change: Diversity, Equity and Inclusion in the Mystery Community. Both had a deep impact on me. Along with that, I’ve been impressed by the Sisters in Crime Eleanor Taylor Bland Award for Emerging Crime Writers of Color. A couple of years ago, I moderated a panel for John Copenhaver, Cheryl Head, and Brenda Buchanan sponsored by Write Out here in DC. All of that added up to me realizing that SinC could do more for the LBGTQIA+ crime fiction community.

So many people think of Sisters in Crime as an organization devoted to combating the sexism women face in crime fiction writing and publishing, but the organization is now working on behalf of LGBTQIA+ writers, as well as writers of color. Has SinC's mission changed, or was that the goal from the beginning?

SH: Our mission has expanded. Women writers still haven’t reached parity with men when it comes to awards and reviews, but we’ve made vast gains since the organization was formed in 1986. We realized there were other voices we needed to raise up, and it fits with the original intent of SinC as an advocacy organization.

The qualifications for this award seem wonderfully thoughtful (the allowance of a pen name, for example). How did you go about setting up its parameters, particularly keeping representation so firmly in mind?

SH: I’d love to take full credit for all of that, but the credit goes to our acting executive director, Julie Hennrikus, the board, and the team I’m working with to run the program: Valerie Burns, Marla Bradeen, and Mia Manansala. I’m so lucky that the board embraced and approved my legacy project and that so many people are volunteering to make it a success. I’d like to add that the award is open to all members of the LBGTQIA+ community who are writing crime fiction. You don’t have to be a member of SinC or live in the U.S. to enter.

John, in the press release for the award, you mention the history of LGBTQIA+ books hidden in the backs of bookstores rather than included with other crime fiction. Is that phenomenon changing, or is the industry still behind the curve?

Certainly, publishing has come a long way, and bookstores don’t (usually) tuck the LGBTQIA+ mysteries at the back. What still happens, though, is that many publishers — not all, though — see queer books as exclusively for a queer audience and won’t consider publishing them because they are “too niche.” I would like to see more of a willingness to promote LGBTQIA+ beyond a purely queer audience. Many people — and especially the next generation of readers — are reading across [differences] and aren’t “staying in their lane,” which is a beautiful thing and an opportunity for publishers to seize.

As one of the judges, John, what’s likely to strike your interest? Is there something specific you'll have an eye out for? And, of course, you're one of three judges, so entrants should know this refers to your own subjective tastes.

What I’m looking for is what I’d be looking for in any submission to a similar contest. Rich characters who don’t rely on stereotypes. A clear and compelling voice. And a great hook. Personally, I care a lot about language and mood, so my tastes are going to lean to the atmospheric, but never at the cost of telling a great story.

You’re Going to Suck at Parties: My Speech to Graduates

A little free advice on writing, life, and the writing life