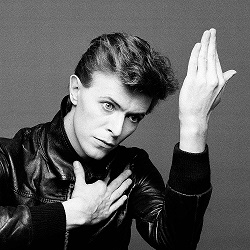 David Bowie and Lou Reed, two of the most literary artists of the 1960s and 70s, both came to my attention in my early teens, in Massachusetts. Each summer, I visited my musically obsessed cousins, listened to their newest albums, and heard great Boston and Providence radio stations. From the haze of their widely varied interests, I recognized Reed as the “Walk on the Wild Side” guy, and Bowie as someone who “held a séance” at his shows.

Bowie meant a great deal to my cousins and, as his recent demise has revealed, many felt the same. But, over the next years, Lou became my guy. He was a punk. His honesty was often brutal, but I preferred that to the corporate crap of the mid-late 1970s. I didn’t want to be lied to.

But each of them sustained a lie in those days that they were homosexual. Or they represented themselves as and to homosexuals. And as I was learning more about them in the early 80s, they revealed heterosexual lives. Their fans were betrayed. They hated themselves. They were complicated and decadently indulged artists.

Now that both Lou and David are gone, I can understand them better as a unit. Bowie once said that the Velvet Underground, with Lou as lead songwriter, had created a new landscape that he (Bowie) peopled with his own creations. And, of course, David produced Lou’s great solo work, “Transformer,” which contains “Walk on the Wild Side.” Still, they didn’t stay close in their art over the years. Big egos?

Now that they aren’t here to tell me no, I feel I owe them both a great debt of artistic gratitude. Put together, they are like John Lennon and Paul McCartney, great songwriters and artistic talents who needed each other to shift the way pop and art interacted. Their influence together resounds, as does Andy Warhol’s, throughout world culture.

Does anyone think that Lou and David were insignificant to the gay-rights movement of the 70s? Their fame, and their playing with fame, as well as their artistry, vastly expands the scale of their pop-musical achievements. But that shouldn’t diminish their musical triumphs. The storytelling in such masterpieces as “Space Oddity,” “A Perfect Day,” “Heroes,” and “New Age” stands up to years of analysis, revealing new angles over time.

They conveyed something greater than entertainment to their audiences: freedom, suffering, urgent desire, a dogged demand to keep moving forward. That’s why thinking of them together now is so becalming. They shared their urban, disaffected, over-stimulated, under-intellected landscape, the grim existential reality we all face. And they took pleasure in it. They marked its passing, building monuments to the frailty of all human endeavor.

That message reached me, dislocated in the American suburbs, disconnected from my peers, unable to articulate with reason. They told me the artist creates the life worth living by taking action. They told me that you have to leave home and make your own self, create your own home and identity, and that these things could and should fluctuate, maximizing freedom and suffering. I learned not to shy away from pain.

Lou and David also taught me something else: Fame is wretched. If you can’t walk down the street anonymously, then you’ll have a problem knowing what the real you is looking for. Much better to stay under the radar, away from the spotlight, free of the chains of fame, money, sex, drugs, and all the fun things that kill us. These guys turned themselves inside-out to share with their audiences and had great outward success, but they had to do hard work to get back inside in relation to themselves again. Their privacy was destroyed until they wrestled it back.

They both had lulls in their careers. They both suffered the effects of too many drugs. They both diffused their energies after they dissipated them. They weren’t always easy to follow. But they were artists. They were moving on and dealing with their issues their way. They kissed. They came together so that we can keep them together.

Artists can be gods, or they can be everyday people who act like gods, or they can just be everyday people who have contact with the gods. I’m not the same person I was in the mid-1970s, but I watched Lou and David all those 40 years. And they gave me a lifetime of beauty and fascination. They demonstrated that the work of the solo artist is irreplaceable. And I want to do that, too.

Y.S. Fing is a composition lecturer at a local university and a literary gadfly in the DC area. Recently, he has been experimenting with short-essay form in Fingism and Finglish.