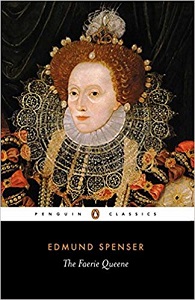 As an epic poet, I’ve made a point of reading epic poetry, and while such poems all have the qualities of encapsulating the literary, philosophical, historical, and moral worlds in which their composers lived, few are as ambitious or encapsulating as Edmund Spenser’s The Faerie Queene. Spenser, like many of his worldly and striving contemporaries, saw the “brave new world” which Queen Elizabeth stepped up to with victory over the Spanish Armada in 1588.

The Portuguese and Spanish had opened up the world to exploration and found themselves very rich as a result. But they were Catholic societies, more intent on absolute subjugation and material exploitation than on the establishment of “mutually beneficial” economic arrangements.

The British, having reformed their religion and, as Max Weber pointed out in The Protestant Ethic and the Spirit of Capitalism, accepted that wealth accumulation was evidence of divine favor, were just realizing the benefits of exploration, and Spenser used Elizabeth as an avatar for the verge of greatness which he felt his country was upon.

Because, as scholar Nicholas Canny says, “Spenser, like all humanists, identified himself as a teacher of moral behavior,” he formulated The Faerie Queene so that each book (12 were planned at the outset) would reflect the virtues that Elizabeth (and, therefore, Great Britain) manifested.

Here is Spenser’s dedication to Elizabeth in the first book:

"TO THE MOST HIGH, MIGHTIE, AND MAGNIFICENT EMPERESSE RENOWNED FOR PIETIE, VERTVE, AND ALL GRATIOVS GOVERNMENT ELIZABETH BY THE GRACE OF GOD, Queen of England, Fraunce and Ireland, and of Virginia, Defender of the Faith etc. HER MOST HUMBLE SERVAUNT EDMVND SPENSER DOTH IN ALL HUMILITIE DEDICATE, PRESENT, AND CONSECRATE THESE HIS LABOVRS TO LIVE WITH THE ETERNITIE OF HER FAME."

Note how Spenser made sure to get his name in there, too. It’s revealing because Spenser turns out to have been not just an ambitious poet, but a striver, a man after recognition, status, property, and material wealth. Therefore, he was a complicated person whose life is worthy of study for what it reveals about Great Britain at the beginning of its empire-building.

One of the ways that the (relatively) young Spenser pursued glory and material accumulation was to take the job of secretary to Lord Deputy of Ireland, Arthur Grey, in 1580. Ireland, at that point, could be taken for the “first pancake” of English imperial expansion, because even though Elizabeth was queen of Virginia, no Brits had colonized yet.

It was in the Emerald Isle where Spenser was inspired by natural beauty and magic to write his great epic poem, and inspired by moral superiority to act as the prototypical English colonial. If you don’t know the history of British conquest of Ireland, Spenser is a good place to start. English dominion over Ireland was not secure in 1580, and Lord Grey took it upon himself to secure that dominion. He led various military assaults and massacres and instituted policies that created famine in their wake.

Spenser learned at Grey’s heels, and, after the Second Desmond Rebellion, was rewarded with extensive property in the Munster Plantation near Cork. Grey was subsequently recalled by Queen Elizabeth and chastised for being “a bloody man.”

And this is when Spenser’s vision for The Faerie Queene was cracked in two.

In 1590, Spenser returned to England to publish the first three books of The Faerie Queene, to some success, including the author’s being awarded a life pension from Elizabeth herself. But, rather than further social-climbing, it seems Spenser antagonized those he should have fawned over and, subsequently, altered his valuation of the virtues of her court. He did write three more books of The Faerie Queene, but as Canny makes clear, Spenser saw more of the Devil than the Angel in London:

“The Beast was patently more effective in bringing worthy people into disgrace than their moral actions were in winning them honour and reputation. There seemed no point, once Spenser admitted this powerful evidence, in further pursuing his task [The Faerie Queene] because his moral purpose [reforming all the Queen’s English-speaking subjects] had been defeated.”

Starry-eyed no longer about Elizabeth and her goals, Spenser, in the ensuing years, seems to have narrowed his focus and intentions onto preserving those material and social accumulations he had already gathered, and that meant abandoning his Faerie Queene after six books. In 1596, Spenser wrote a 163-page dialogue entitled “A Veue of the Present State of Ireland.”

Various social and military upheavals in the 1590s made Spenser’s holdings at Munster Plantation insecure, and he felt that his perspective needed to be represented directly to the central government in England. Of course, the British had been colonizing Ireland since the 1200s, but Elizabeth’s reign reignited a drive to “reform and civilize” the Irish people.

Not only did England have to deal with the Irish — descendants of barbarian Scythians, Gauls, and Britons — but also those previous generations of British who had become Irish and lost their civility. So, it seems that Spenser’s purpose was to put backbone into the queen’s administration’s attempts to subjugate Ireland more fully. He wanted English government in Ireland to protect his property.

“Eudox — But if that country of Ireland, whence you lately came, be of so goodly and commodious a soyl, as you report, I wonder that no course is taken for the turning thereof to good uses, and reducing that nation to better government and civility. Iren — Marry so there have bin divers good plottes devised, and wise councels cast already about reformation of that realme…”

Do you hear that unquestioned Anglo moral superiority coming through? “Turning thereof to good uses…reducing to better government…reformation…” Both of these characters represent opinions which diminish and ignore the Irish themselves. The “privilege” that we decry in the modern world is right there, no change. Moral superiority allows the dismissal of other opinions.

And then the part which truly reveals Spenser as John Bull. About two-thirds of the way through the book, after detailing the starvation Lord Grey brought unto Munster plantation to subdue rebellion, Spenser implies that, rather than stop Grey and recall him as a “bloody man,” the English should have gone further and completed the task via military occupation and an instituted famine to gain full control:

“Therefore by all means it must be fore-seene and assured, that after once entering into this course of reformation, there bee afterwards no remorse nor drawing backe for the sight of any such rueful objects, as must thereupon followe, nor compassion of their calamities, seeing that by no other means it is possible to cure them, and that these are not of will, but of very urgent necessitie.”

Thus does humanism eat itself, and “reformation” is the blinding word, the plug in the dike, staving off the horrific moral guilt of genocide: They are animals, they can’t be reformed, “exterminate the brutes” (that’s Conrad; Spenser never says it, but he means it). His language is bureaucratic, but he sides with Grey’s tactics (plus the eradication of Gaelic language) based on the moral belief that the English are better than other people. The English colonial experiment then began in earnest.

Scholars these days debate the influence this text had on the British government in the next century and a half, because the book wasn’t published until the mid-1700s. My opinion is that the prejudice and hatred Brits harbored for others was in the air, and Spenser found voice for it.

This may not be the preferred lesson, for Anglos, from Spenser’s life, but despite his ambition and literary qualities, this intention to exterminate is the lesson he ultimately taught. And you’ll find it, fully represented in stark contrast to morality, in The Faerie Queene.

That’s ironic. But irony is the better perspective, says I, for an epic poet, than moral righteousness.

Y.S. Fing thanks you for the taking the time to read this 1,300-word essay.

Through her many books, journalist Gessen shines an unsparing, incisive light on Russia