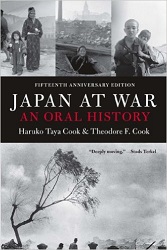 In the last few weeks, I’ve read three pieces which I think will stick with me for some time. In case you are wondering, “What does it take to impress this guy?” I’ll give you the low-down in one word: resonance.

I’ve said recently that I’m careless about the books I pick up. I vary between fiction and nonfiction. I don’t care about any genre. I just want a good story that rings in my metallic head after the reading is done. If I reflect on the work, if its ideas reverberate, it has passed the hardest test for me.

First, I read Japan at War, which is an oral history published in the mid-1990s reflecting on the lives of the people who participated in the war, the soldiers and their wives, the officers, the POWs, the teachers, the kamikaze pilots, the human torpedoes, and the hibakusha who survived.

The people are older, looking back on lives more or less successfully lived after 1945. The thesis of the book, and a theme that recurs throughout the various horrific and surreal recountings, is that the Japanese as a society never faced up to their responsibilities for war in China, colonization of Korea, and the true devastation they brought upon much of Asia in World War II.

The resonance in the various tales is manifest by the hellishly amoral people so many Japanese had to become to do the things they did. Several of the interviewees had been tried and convicted as war criminals in China. They faced up to their responsibilities, the Chinese made sure of that. Then they turned them over to the Soviets. Those men speak with a particular emptiness about how being a prisoner forced them to acknowledge how brainwashed they had been. This is disturbing and fertile psychological ground for a writer.

Second, I read Thomas Jefferson Dreams of Sally Hemings by Stephen O’Connor, a fictional imagining of many scenes from their 37 years of intimate relations. Those who know my writing know that I am drawn to this story. A wonderful, leaping book like this encourages me to continue to move toward envisioning their world myself.

O’Connor uses various anachronistic techniques to present Jefferson and Sally from a score of different perspectives, through Sally’s memoir of her life with Jefferson, as modern people on a subway train, and through dream sequences. It’s well written and delightfully imagined.

The resonance occurs because I have the same grasp of facts that O’Connor does, and I can think about how he plays with fact and fiction. For example, in reality, Sally was most likely illiterate. Thus, no memoir. So, while I appreciate O’Connor’s imagination, I would do it differently. My sense is that Jefferson, who was far more influenced by Sterne than Wordsworth or Keats, was not such a romantic as O’Connor presents. This interaction of our ideas (between reader and writer) is why I read books in the first place.

Third, I’m working on a project with my ENGL101 class, and I took in all 18 of their papers recently. The research project is two-tiered, for the final the students will each create a 30-paragraph persuasive piece, which includes an examination of our university for the strands of institutional racism that were part of its developing structure, and for how that is playing out today, with recommendations for the future. Of course, this can be a touchy subject, and that’s why I was happy to see the work they’d done.

The resonance comes when we collect all of those papers and publish them as an institutional analysis from the grassroots. Some students looked into admissions history. Some explored “separate but equal.” One researched the school newspaper’s history of reporting about race. Some studied Greek life and the various national fraternity councils which reflect institutional racism.

As much as it is doing right now, the university has more accounting to do for the structures that were put together with prejudice and ill-intent. I want to be part of the societal conversation and positive action, and my students are joining in that process. I expect to print enough copies of the book to share it with the dean of my school and other administrators, as well as my students and perhaps my department.

Then the question turns back on me: What do I have to offer of resonance? If I expect power from those whose books I commit to, what am I returning to the conversation? Dear reader, it is only these humble words which will soon enough be consigned to digital dust.