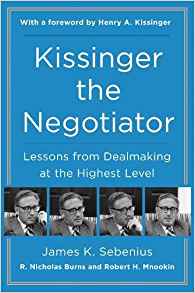 For those aspiring to excel in commercial, legal, or governmental affairs, an essential skill necessary to carry in the toolkit is being a shrewd negotiator. Deals get made only when the stars align and cause two or more parties to decide they’re more likely to prosper under the terms of a new arrangement than by maintaining the status quo, and it’s the negotiator’s job to manipulate the stars.

How to improve as a negotiator? Well, if one desires to enhance his golf game, it makes sense to study what Brooks Koepka does on and off the course. If one seeks to elevate his public speaking eloquence, then zero in on Lincoln’s and Churchill’s speeches. If one hopes to write bestselling novels, devouring John Grisham’s fiction would be time well spent.

Moving to the subject at hand, for the most logical choice as a top negotiator worthy of study and emulation, Dr. Henry Kissinger is on everyone’s short list. A few years ago, leading scholars in this field — James K. Sebenius (professor at Harvard Business School), Nicholas Burns (professor at Harvard’s Kennedy School of Government), and Robert H. Mnookin (professor at Harvard Law School) — decided the time was right to write a book that not only would detail the particulars of the diplomatic kingpin’s most historic negotiations, but would also derive “actionable insights” which a reader can apply to his own efforts at horse-trading.

The triumvirate’s pedigree, approach, and goal so impressed Kissinger (who’s still active in his mid-90s) that he fully cooperated on their book and provided his observations and commentary throughout it, though having no editorial control. Lest there be any doubt about this masterwork’s having received Kissinger’s full seal of approval, he wrote its foreword.

The final product of this collaborative effort, Kissinger the Negotiator: Lessons from Dealmaking at the Highest Level, is a book to be studied and savored by all who want to up their game at the bargaining table. What sets it apart from other “how to negotiate” books is that the advice on how best to set up the field of play while away from the table, as well as tactics for optimum card-playing at the table, are all thoroughly buttressed by the authors’ vivid accounts and graphic diagrams of what Kissinger actually thought and did in his star-aligning negotiations with the leaders of the Soviet Union, China, North Vietnam, South Africa, Rhodesia, Israel, and other countries.

Kissinger never wanted to “zoom in” and sit at a table with a counterpart until he had “zoomed out” away from the table and done everything in his power to maximize the number and size of his bargaining chips. Before zooming out, though, he first had to assess and clarify his ultimate long-term objective. Once he’d identified that, the next step was to “map backward” to line up the most prudent sequence of prerequisites needed to be accomplished to reach the goal line.

British novelist E.M. Forster famously exhorted the masses to “only connect,” and master negotiator Kissinger embodied that concept. Part of his genius has always been to see the potential linkage between nations and ideas, and that skill led to his devising new options of possibility which he deftly integrated into his negotiation strategy.

How could the United States achieve a face-saving exit from Southeast Asia beginning in 1969 while the North Vietnamese military was being strongly supported by the Soviets and Chinese? Solution: Get the Communist powers to pull back their support by executing a triangular negotiating strategy and inspire a competition between the two Red participants as to who would have the closer relationship with the Americans. To ramp up that competition, invoke a series of incentives and penalties to goad both countries into scaling back their support of the North Vietnamese.

How could America, without using military force or providing foreign aid, stop the spread of communism in southern Africa in 1976 and prevent it from becoming a new front in the Cold War after Angola had fallen under Soviet and Cuban influence and Mozambique had a new Marxist government? Solution: Employ a “wide-angle lens” aimed at removing white-minority rule in Rhodesia and Namibia. By befriending and empowering the black majorities in those countries, in return, get their commitments to keep out foreign troops of all nationalities.

And don’t begin the process by sitting down at the negotiating table with Rhodesia’s Prime Minister Ian Smith in hopes of talking him out of white rule until all ducks are lined up to give him no good long-term option except to open his elections. A side benefit of this approach: the avoidance of looming race wars in south African countries.

What Kissinger did in Vietnam, southern Africa, and elsewhere in strategic sequence away from the table maximized his capability to win at the table. Succeeding was imperative because, although maintaining the pre-Kissinger-negotiation status quo was just fine with our adversaries, it had become dangerous to America’s position in the world.

From the American foreign policy perspective, existing circumstances had to be changed, preferably through diplomacy (as opposed to war). To move countries off dead center, Kissinger knew he had to add new cards to his deck to create a new game where his counterparts recognized that the deal he was proposing was more advantageous than keeping things as they were.

After evaluating best practices in what Kissinger did away from the table, the book then covers his modus operandi once he arrived at the table to deal with a flesh-and-blood foreign leader. The interpersonal skills Kissinger brought to face-to-face diplomacy were beyond dazzling.

A fundamental rule: Know one’s opponent. Fortunately for the trio of authors, beyond their extensive interviews with Kissinger, their subject has written many books that give his first-person account of his most important diplomatic conversations — as have many of his counterparts, whose take on these negotiations were included where possible. Kissinger’s vivid word pictures of the men across the table suggest that he knew their inner makeup better than they themselves did.

With his extraordinary level of psychological insight, Kissinger could empathize with them; stay calm and rarely be surprised by them; humor them; establish trust with them (and, thus, elevate their conversation to a higher level of transparency); and exercise his “sixth sense of knowing when his counterparts were ready to settle.”

In Kissinger the Negotiator, Messrs. Sebenius, Burns, and Mnookin have opened up the world of three-dimensional-negotiation chess as played by Grand Master Henry Kissinger, whose success came from his meticulous preparation and strategy that is to negotiation what Bill Belichick’s methods are to football.

When it came time to play the game at the table, Kissinger was a man among boys. This marvelous book on his “dealmaking at the highest level” reveals to the reader his supernatural skills, as demonstrated throughout his years as national security advisor and secretary of state, that led to his receiving the Nobel Peace Prize and the Presidential Medal of Freedom. Thanks to the three Harvard professors, Kissinger’s approach has been detailed and highlighted for mere mortals to use when the time comes to bargain.

Talmage Boston is a historian and lawyer in Dallas, Texas, whose most recent book is Cross-Examining History: A Lawyer Gets Answers from the Experts about Our Presidents (Bright Sky Press, 2016).