The (Artist’s) Struggle Is Real

What Alberto Giacometti and W. Somerset Maugham can teach us about it. 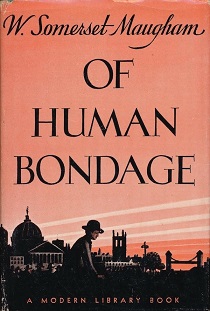 Several years ago, at the Giacometti Institute in Paris, I saw an installation of Alberto Giacometti’s legendary studio. It was small and rather squalid. There were some of his drawings on the plaster walls. There was a table of brushes and tools, an easel, pots, and an old wicker chair, a few sculptural plaster casts, and the stool where his models once sat.

Giacometti worked here for 40 years, tirelessly shaping and paring down his figures, breaking them apart and starting again. He used the same few models. The result was genius. When we look at his pieces, we seem to see his subjects right to the core of their being.

This summer, when I finally got around to reading W. Somerset Maugham’s 1915 novel, Of Human Bondage, I remembered that studio. All artists struggle one way or another, but not all struggles are equally worthwhile. And some artists, no matter how many years they work at their craft, might be better off trying something else.

Maugham explores these questions. He tells the story of Philip Carey, who passes up a place at Oxford, then quits his job in London, to follow his dream of becoming a painter. He moves to Paris and enrolls in a drawing class.

Fanny Price, the most serious and dedicated student in the class, offers to guide him. Noticing his admiration for a particularly charismatic student, she observes, “He’s no good you know. He thinks he’s a genius, but he isn’t. He’s too lazy for one thing. Genius is an infinite capacity for taking pains. The only thing is to peg away. If one only makes up one’s mind badly enough to do a thing one can’t help doing it.”

Sometime later, she invites him to see her paintings. She lives in squalor, having sacrificed everything for art. But when Philip looks at her work, he’s panic-stricken. It’s so bad that he hardly knows what to say.

What drives the obsessive artistic pursuit? Or for that matter, the obsessive romantic pursuit? (Another plotline in the novel concerns Philip’s helpless infatuation with Mildred, a waitress who is shallow, selfish, and incapable of loving him back.)

Evidently, it’s not always passion or talent, as we see in another scene, when a writer who has been modeling for Philip shows him part of his new manuscript. Philip realizes that “the mind behind that broad brow was trivial; and the flashing, passionate eyes saw nothing in life but the obvious…It distressed him to realize that his magnificent struggle was futile...

“Philip looked at his own work. How could you tell whether there was anything in it or whether you were wasting your time. It was clear that the will to achieve could not help you and confidence in yourself meant nothing.”

Part of what makes this book so engaging is Maugham’s ruthless humor. He understands the artist’s struggle so well. But he never strikes a false or sentimental note, even when describing the sometimes-tragic consequences.

Finally, Philip asks a painter he admires to look at his work and tell him honestly if he should give up his efforts. “All my friends know they have talent,” he says, “but I am aware some of them are mistaken.”

The painter comes over straight away, giving him no time to prepare. Looking at Philip’s work, he observes that there will be many artists worse than Philip but also many better, and with perseverance, he thinks Philip might become “not incompetent.” However, the commitment takes a huge toll on the spirit, and he pities people who must survive on their artwork alone. So, he advises Philip to give it up and try something else. Although it sounds hard, he says, he wishes he had been given — and had followed — such advice when he was young. Philip ponders this:

“There would be something fine in giving up art because he was convinced that he could not excel, but unfortunately it would seem so only to himself: to others it would be an admission of defeat, and he did not want to confess that he was beaten.”

So, what begins as a noble ambition can, over time, morph into intransigence and pride.

Maugham makes a similar point about Philip’s passion for waitress Mildred. He hates himself for wanting her so much. He knows she’s no good. But something inside him (ego or pride?) won’t allow him to give her up.

Maugham drew from personal experience in writing this 700-page novel. It is widely considered his masterpiece. But he’s never been considered one of the greats of his generation, on the level of say, James Joyce, T.S. Eliot, or Virginia Woolf. Even so, his work was enormously popular during his lifetime, and he was a huge commercial success, especially as a playwright.

Of the great artists, Maugham has this to say:

“In the true painters, writers, musicians there was a power which drove them to such complete absorption in their work as to make it inevitable for them to subordinate life to art.”

That’s what we see in the example of Giacometti. He never left that tiny studio or slowed down, even when he was one of the most highly acclaimed artists in Paris.

As for Philip, he eventually gives up his grand passions and becomes a doctor. He makes good friendships and marries happily. And there’s real nobility in this choice. For “he had a feeling that life was to be lived rather than portrayed, and he wanted to search out the various experiences of it and wring from each moment all the emotion that it offered.”